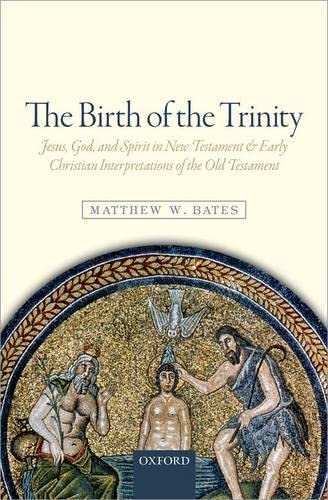 The Birth of the Trinity: Jesus, God, and Spirit in New Testament and Early Christian Interpretations of the Old Testament

It is not every day that one reads a book that makes a distinct contribution to our understanding of how the NT authors interpret the OT, sheds significant light on the reading practices of the NT authors by means of the early church fathers, and uses those results to make a compelling argument for the origins of the doctrine of the Trinity. But this is exactly what Bates does in The Birth of the Trinity. Bates states his argument clearly: “My thesis is that a specific ancient reading technique, best termed prosopological exegesis, that is evidenced in the New Testament and other early Christian writings was irreducibly essential to the birth of the Trinity” (p. 2). In other words, this reading practice, which conceptualizes the persons of the Trinity as dialoguing with one another, provides a window into the interior relationship of the divine life. Bates is deeply committed to retaining the language of personhood to describe the Trinity, since what emerges from his research into the prosopological reading practices of the NT authors is “a Father, Son, and Spirit who are characterized by relentless affection and concern for one another” (p. 7).

Bates wisely refuses to claim that his insight is the singular key that explains the birth of the Trinity, and he admits that a variety of factors, including “experiential, mediatorial, and philosophical” are needed to explain the origins of the Trinity (p. 26). But recent studies are in need of “urgent supplementation” by what he refers to as “Trinitarianism by continuity in prosopological exegesis” (p. 27). Bates makes a powerful argument for including the early church Fathers as offering insight into the reading practices of the NT authors. Bates shows how Tertullian and Justin proffer a person-centered reading strategy that claims to find traces of divine dialogue in the OT. The divinely inspired speech of the OT often functions like a script, authored by the Spirit, as the prophet places the Son and the Father in a theodramatic setting as they dialogue with one another and give a window into their “unfolding story of mutual esteem, voiced praise, collaborative strategizing, and self-sacrificial love” (p. 40).

Chapters 2–6 present the heart of Bates’s thesis as he shows how prosopological exegesis provides windows into the dialogues and events of the divine persons. These events include: conversations between the Father and preexistent Son (ch. 2), the incarnation and earthly mission of the Son (ch. 3), the Son’s death on the cross (ch. 4), the Son’s praise to God for resurrecting him from the dead (ch. 5), and the Son’s celebration of his enthronement and victory (ch. 6).

For example, Bates notes how the changes in the person speaking in Psalm 2 force the reader to reflect on who is doing the speaking. Bates argues that the Son/king is the primary speaker who reports the speech of the Father in Psalm 2:7: “You are my Son, today I have begotten you.” In other words, David’s (prophetic) words report the conversation that takes place between the Father and the preexistent Son. Thus, when the language of Psalm 2:7 is taken up by the Gospel authors at Jesus’s baptism and transfiguration, it may be that “prosopological meditation on Ps 2:7 might have resulted in a growing self-realization” that Jesus was the person to whom these words were reported (p. 65). As Bates says: “the Evangelists urgently press us toward the conclusion that when the earliest church remembered Jesus, above all they remembered that his self-identity was bound up with this scripturally informed ‘You are my Son’ conviction” (p. 66). Bates suggests that while one may disagree with a Trinitarian dialogical explanation for the riddle of Psalm 2, the unmarked speakers and shifts within the dialogue are “genuine riddles that urgently plead for a satisfying solution. The earliest church offered a triune key to these interpretative locks . . . that was thoroughly grounded in a detailed reading of the Old Testament texts in question. The notion of divine persons in fellowship from before the dawn of time emerges to a significant degree from the matrix of prosopological readings of the Old Testament” (p. 84, emphasis original).

A few more brief examples will suffice to demonstrate his argument. The Son’s quotation of Psalm 39:7 (LXX) in Hebrews 10:5 presents the Son thanking the Father for giving the incarnational body to the Son, and the Son in turn reciprocating by granting this same body back to the Father in loving obedience. In Mark 15:34 the Son’s cry of abandonment where Jesus speaks the words of David from Psalm 22:1 show the Son’s awareness of the divine script: “And could it be that Jesus knew that the divine playwright, the Spirit who had supplied the words in advance to David (cf. Justin, Dial. 34.1), had authored not a tragedy but a comedy because he knew that the script of the entire psalm itself called for a sequence of despair and trust followed by rescue and praise?” (p. 129, emphasis original). When Jesus’s speaking the words of Psalm 22:1 is seen within this larger theodramatic setting, Bates says it can “teach us something significant about the raw, edgy, surprisingly candid intimacy of expression that is permitted between the divine persons within the Godhead . . .” (p. 134). Bates shows how the author of Hebrews employs the same script (Ps 22) to show how Jesus is rescued from death in order to give praise to his Father amidst his family (Heb 2:11–13). One of Bates’s most important contentions is that the NT authors do not draw upon the scriptural words of David because they view him as a “type” of Christ; rather, David functions like a prophet who took on the person of the coming Christ (cf. his discussions of Acts 2:22–36; Rom 15:3; 2 Cor 4:17).

In Bates’s final chapter (ch. 7) he notes the ways in which Gnostic texts also employed person-centered reading strategies but within an entirely different framework, and he provides a reasoned defense for the particular theodramatic reading strategies of the early church. Bates further argues that the validity of the early Christian practice of prosopological exegesis depends upon at least four conditions: “the reality of a divine economy,” “Divine authorship of the ancient Jewish Scripture,” “The unity and plot-arrangement of the ancient Jewish Scripture,” and “Prophetic participation in the divine economy” (pp. 191–92).

The Birth of the Trinity is a stunning achievement that makes a powerful argument for the origins of the doctrine of the Trinity by means of close attention to the reading practices of the early church and the NT authors. Bates’s thesis further makes a powerful argument for shifting the language from Bauckham’s Christology of Divine Identity to a Christology of Divine Persons. Bates’s work provides a helpful demonstration for the way in which the early church Fathers open up new vistas for the interpretation of the NT. While prosopological exegesis provides a window into the interior relations of the divine persons, it is almost certainly one important factor among many, as Bates himself affirms, that contributed to the birth of the Trinity. Given the genuine difficulty of identifying the shifts in unmarked speakers in the OT texts, I expect some will take issue here or there with some of Bates’s explanations. Also, it should be noted that the argument has serious explanatory power for the relationship between the Father and the Son but less so for the Spirit as a distinct speaking person, although Bates notes that the early church frequently saw the Spirit as the inspiring agent of the theodramatic script. Even so, Bates has made a remarkable contribution to the story of the divine life contained in the scriptural dialogues—a “story that stretches across the canvas of time, reaching back before creation, enfolding the incarnation, crucifixion, and enthronement of the Son, and culminating with conversations that anticipate the future new creation” (p. 204).