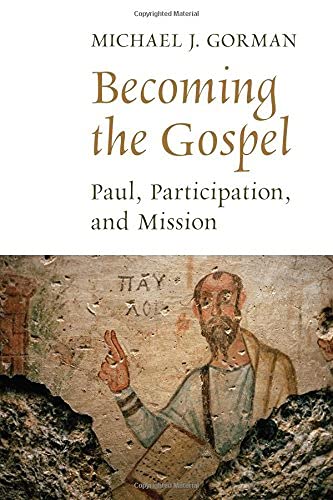 Becoming the Gospel (BTG) completes what Michael Gorman calls his “accidental trilogy” on Paul (pp. 2, 3, 297). Following in a trajectory set by Cruciformity: Paul’s Narrative Spirituality of the Cross (Grand Rapids: Eerdmans, 2001) and Inhabiting the Cruciform God: Kenosis, Justification, and Theosis in Paul’s Narrative Soteriology (Grand Rapids: Eerdmans, 2009), this final installment argues pointedly that Paul’s agenda for the early Church consisted in embodying—not simply believing—the gospel. “Becoming the gospel,” moreover, inescapably entails partnership in the missio Dei. Importantly, Gorman positions BTG as a sustained reply to a recent critique lodged against Inhabiting the Cruciform God: does not the proposal that “cruciformity” amounts to “partaking in God’s very existence” hemorrhage “being” and “act” such that the Church’s participation in God’s mission is rendered unintelligible? Had Gorman the panache of Karl Barth, BTG might have been simply entitled Nein!, for rather than bankrupting missional impetus, Gorman argues that “participation” funds it. In his words: “Theosis—Spirit-enabled transformative participation in the life and character of God revealed in the crucified and resurrected Messiah Jesus—is the starting point of mission and is, in fact, its proper theological framework” (p. 4).

Gorman defends this thesis through appeal to exegesis, hermeneutics, and theology (p. 10), and the convergence of these disciplines in BTG offers a useful heuristic device by which to represent the principal features of his argument. Gorman addresses the latter two most directly in chapters 1–2, “Paul and the Mission of God” and “Reading Paul Missionally.” Hermeneutically, Gorman underscores the prominent role which “mission” plays in Paul’s writings: Paul wished for his communities not merely to underwrite his endeavors, but to collaborate with him by similarly engaging in God’s work of restoring the broken cosmos. Any reading that renders mission irrelevant does great injustice to Paul. Theologically, Gorman asserts a commitment not simply to identifying what Paul expected of his communities (historically), but further to assisting those who read the Bible as Scripture in understanding their role in the missio Dei. The Word is a Word freshly present, continually spoken, and contemporarily binding. As such, “those of us who read Paul’s letters as Christian Scripture need also to participate in the advance of the gospel by becoming the gospel, in word, in deed, and—if we are faithful and it becomes necessary—in suffering” (. 61). Exegetically, finally, Gorman’s analysis of Paul operates within the parameters established by his hermeneutical and theological convictions, as the titles of Chapters 3–8 suggest: “Becoming the Gospel of Faith(fulness), Love and Hope: 1 Thessalonians,” “Becoming and Telling the Story of Christ: Philippians,” “Becoming the Gospel of Peace (I): Overview” (where he devotes his attention particularly to Romans), “Becoming the Gospel of Peace (II): Ephesians,” “Becoming the Justice of God: 1 & 2 Corinthians,” and “Becoming the Gospel of God’s Justice/Righteousness and Glory: Missional Theosis in Romans.” Thus, not only do Paul’s letters enjoin participation in God’s mission for the immediate communities to which he wrote, but so also do they institute a behavioral pattern determinative for the Church universal (cf. p. 297).

BTG exhibits all of the admirable qualities for which Gorman is known: careful research, lucid prose, and (unfailingly) keen insights. Nevertheless, there are several points at which the project may warrant critique. First, though Gorman stamps 2 Cor 5:21 as the “theme text” of the book, he furnishes no thorough engagement with N. T. Wright’s proposal that Paul there speaks uniquely concerning his apostolic ministry and not about the role of the Christian community at large (“On Becoming the Righteousness of God: 2 Corinthians 5.21,” in Pauline Theology, ed. David M. Hay [Minneapolis: Fortress, 1993], 200–8). Gorman acknowledges Wright’s thesis, briefly genuflecting to it in footnote 83 on p. 247, but he simply cites Morna Hooker’s position (cf. “On Becoming the Righteousness of God: Another Look at 2 Cor 5.21,” NovT 50 [2008]: 358–75) as a counter-testimony without tackling Wright himself. This omission, which replicates a similar silence in Cruciformity and Inhabiting the Cruciform God, leaves the reader to wonder about the status of the overall argument in BTG if the designated central passage cannot sustain a missional interpretation. Second, it appears that BTG under-attends the place of “suffering” in the Church’s mission. Though Gorman does reiterate the significance of suffering (cf. 137–38), he bypasses it at key exegetical moments (e.g., Phil 3:10–11) and occasionally describes it as a likely experience for Christians, whereas for Paul it constitutes a criterion for what it means to be “in Christ.” Additionally, Gorman speaks more of suffering as a consequence of living missionally rather than as a means by which God’s mission is furthered, as Paul intimates in 2 Corinthians. While it is true that Gorman gives more press to this theme in Cruciformity, the marginal space that it receives in BTG still puzzles given the book’s thesis. Third, Gorman’s argument would have been buttressed by providing greater attention to the Pauline canon—and particularly those letters not regularly regarded as “authentically” Paul’s. Harking back to my second critique, for instance, the function of “suffering” as a way of participating in the mission of God might have been foregrounded helpfully had he considered letters like Colossians and 2 Timothy. However, given Gorman’s concession that “the absence of chapters on other Pauline letters should not be taken as a sign that they lack a missional dimension” (p. 15), perhaps we are here left to acknowledge critical areas in which his work might be extended rather than an inherent defect in the design of the book itself.

The critiques lodged against BTG are in no way intended to challenge its overall value: the missional reading of Paul for which Gorman argues is adroitly defended. Given that BTG is the last in Gorman’s Pauline trilogy, one does leave off reading the book curious about (not to mention expectantly awaiting!) the new turn Gorman might take in his research and writing. Michael Gorman is a gift to the Holy Community, and the more we hear from him the better.