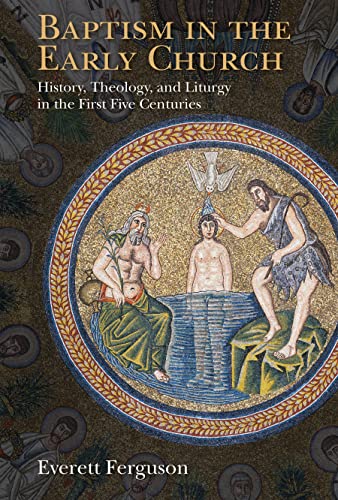 Baptism in the Early Church: History, Theology and Liturgy in the First Five Centuries

Everett Ferguson, the esteemed patristics authority who is now Emeritus professor of Church History at Abilene Christian University, has amply demonstrated how fruitful a scholar’s retirement years can be with the release of Baptism in the Early Church. This compendious volume traces the development of baptismal thought and practice by century, by geographic region, and in inscriptions, artwork and church architecture across a half-millennium of Mediterranean life. One finds reflected here whole decades of Ferguson’s research, earlier writing, and extensive interaction with the work of others. One could say that no stone has been left unturned!

The release of the volume is timely, coming as it does in the midst of a resurgence of interest in the Early Church manifested within the Protestantism of North America and beyond. Readers spurred on by this resurgence, and who read in the hope of mining riches from Christianity’s early centuries will not go away disappointed. This work will serve as the stepping-stone for many towards independent researches of their own.

But as surely as we who read approach the book in this context of expanded interest in the Early Church, Ferguson has himself worked from within an identifiable context. That context is his active participation in a branch of the Christian tradition that, styling itself “restorationist,” has from its early nineteenth-century foundation, aimed to replicate the life and worship of the Christianity of the apostolic age. It is only fair to note that this magisterial volume discloses what may be called an “apologetic” interest which, while it stops short of commending one particular branch of the church, is nevertheless concerned to burnish restorationist themes. These themes include the following three: (1) Christian baptism from its origin invariably involved dipping or immersion (pp. 59 ff); (2) the baptism of the infant children of Christian parents is non-apostolic and occurred only as a later interpolation (pp. 138 ff.); and (3) “the modern evangelical understanding that faith effects … new life, with baptism being a subsequent human work” (p. 164) deserves to be opposed since the Christian experience of forgiveness of sins is, in both apostolic and Patristic periods, always associated with baptism. Ferguson knows his Greek; his historical researches are unparalleled; yet these restorationist loyalties are scarcely concealed throughout. Ferguson’s apologetic interest does not mean that his writing is polemical or adversarial. It is a monumental work of historical investigation, unlikely to be equaled in the foreseeable future. In its field it will prove to be the source first consulted by scholars representing a wide range of expressions of Christianity.

Ferguson’s linguistic and historical skills brought to bear on these biblical and historical materials pertaining to baptism are indeed formidable. Yet these are not the only skills which might be used in the investigation of these same materials. Ferguson sees a preponderant continuity of understanding about baptism and its significance within the writings of the NT as well as in the centuries beyond. He allows that the administration of baptism certainly grew more elaborate and even embroidered (with the practice of triple emersion, the use of oil and salt, and the near exclusive agency of bishops who baptized chiefly at Easter). Nevertheless, in Ferguson’s view, the orthodox consistently believed that “the person baptized received forgiveness of sins and the gift of the Holy Spirit” (p. 854). I was helped by recalling the more restrained view of the NT exegete and theologian C.K. Barrett, who in 1985 argued that the writings of the NT do not present this unified view of the sacraments, with the apostles John and Paul characterized by very relaxed views. On the basis of 1 Cor 1:17, Barrett maintains that in Paul’s mind, baptism is distinctly auxiliary to proclamation. All this to say that NT theology will be inclined to see more hues of color on this question than Ferguson has detected.

Ferguson’s work also lacks sufficient theological reflection, especially as it pertains to the development of doctrine. Generally speaking, Protestant historians of theology have noted a strong tendency by Apostolic Fathers and those after them to misjudge the mind of the Apostles in certain respects. But Ferguson, pressing the opinion that there is only continuity of understanding about baptism from apostolic through patristic periods, offers no caution about the steady tendency of early Christian theology to over-identify the saving operation of the Holy Spirit with the administration of baptism. In consequence, regeneration came to be over-identified with the rite (he notes the almost uniform understanding of John 3:5 in this way) such that the former was reckoned to be unfailingly produced through the latter. Such an understanding also slighted the Holy Spirit’s work antecedent to conversion (1 Cor 1:26), the role of personal faith considered by itself (Mark 5:34), the role of faith in regeneration-conversion (John 1:12), and also the clear central instrumentality of the Word or spoken gospel in this all-important quickening of the human heart and conscience (Acts 16:14; James 1:18; 1 Peter 1:23). The Early Church tendency to “collapse” the application of redemption into baptism unwittingly set the stage for later difficulties. The imbalanced Messalian movement (chap. 47) perceived this inadequacy; the major phenomenon of delay of baptism unwittingly testified to the inferences many drew from the too-close equating of baptism and forgiveness.

Our readiness to reckon the patristic period to have been definitive in providing the classic articulation of the doctrines of the Trinity, the two natures of Christ, and sin and grace does not require us to believe also that all major doctrines received comparable definitive treatment in the same period. The eventual recovery and clarification of the Pauline doctrine of justifying faith, a faith reliant upon the hearing of the Word, was, by and large, still centuries in the future. When it came, the exaggerated conception of baptism that Ferguson documents in the first five centuries would undergo long-overdue modifications; it would then no longer be understood to infallibly and inevitably apply, by mere virtue of its administration, the blessing it exhibited.

In sum, readers will find here things about which to demur as well as things to embrace. Baptists will not, on the whole, be amenable to his insistence that the NT teaches that forgiveness is not enjoyed apart from baptism. Paedobaptists will wince at his curt dismissals of the “household” baptisms of Acts and 1 Corinthians as a plausible precedent for the practice of infant baptism, just as they will at his insistence that paedobaptism entered the church only late in the second century as a concession toward dying infants. Yet who is there who does not need to ponder his insistence that it was the near-universal insistence on infant baptism from Emperor Justinian onward that ensured that baptismal pools would give way to lavers and that thorough catechetical preparation of candidates for baptism would give way to ceremonies in which presenting parents gave answer to baptismal questions earlier intended for those who had been expected to answer for themselves?