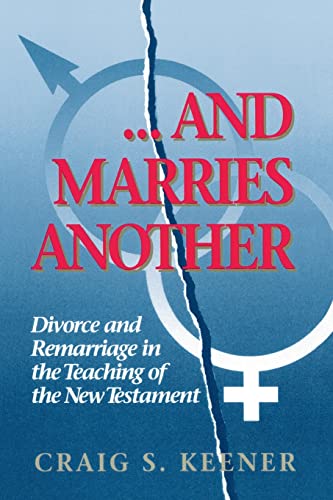 … And Marries Another: Divorce and Remarriage in the Teaching of the New Testament

In a society where more than one-third of marriages end in divorce, an area of sexual ethics which particularly deserves treatment is that of divorce and remarriage, and in this book Craig Keener (an evangelical American Baptist minister with a Duke PhD) offers us his interpretation and application of NT teaching. While he claims a pastoral aim, the format of the book will surely militate against the average reader: 120 pages of text, 135 pages for notes, bibliography and indices. On a controversial subject one wants to check the sources and notes supplied by the author, but only endnotes are used (and most sentences end in a note).

Keener’s position is not particularly new: while divorce is to be avoided if at all possible, Scripture allows for divorce if one partner breaks the marriage bond; divorce always allows for the possibility of remarriage (for the innocent party) and should not exclude people from office in churches. While driven by the pastoral problems faced in today’s churches (his pastoral introduction makes clear the conclusions to which he will head), Keener’s approach is primarily a kind of culturally informed exegesis. In other words, he is concerned with the way in which the first hearers/readers would have heard and understood the relevant NT passages. The passages with which he deals are Matthew 5:32; 19:3–9; 1 Corinthians 7:1–7; 7:10–16; 1 Timothy 3:2.

Jesus’ general statement against divorce (Mt. 5:32) is interpreted by both Matthew and Paul (1 Cor. 7:12–16) as allowing for exceptions to the principle. In Matthew 5:32 the exception is ‘immorality’; this is grounds for divorce, and according to Keener allows for remarriage, since ‘the average first-century Jewish reader would assume that it permitted remarriage, unless explicitly informed otherwise’ (p. 34). This is the crux of Keener’s whole case: he assumes that mention of divorce in the NT allows automatically for remarriage (as in contemporary Jewish certificates of divorce, see pp. 61f.). This assumption then controls the rest of the book; the exceptions allowed by Matthew and Paul are taken as allowance for continued provision of exceptions, all of which allow for remarriage.

It is a pity that Keener doesn’t interact more fully with those with whom he disagrees. Many scholars have argued that Jesus’ teaching is precisely the grounds for explicitly informing Christians otherwise. But Keener fails fully to consider the position from which he disagrees and, by so doing, fatally weakens his overall case. On Keener’s position, Jesus is fully in agreement with Deuteronomy 24:1 (as cited by him in Mt. 5:31), but this hardly makes sense (despite Keener’s attempts) of the antitheses of Matthew 5. Keener’s discussion of Jesus’ teaching in Matthew 19:3–6, which is normally taken as Jesus’ positive alternative to the Mosaic permission, is controlled by the very assumption that Jesus seems to challenge: marriages can be ended (see p. 44); and it makes nothing of the astonished response of the disciples in verse 10. It may be that Keener’s method is unable to recognize the truly shocking and (in first-century terms) surprising elements in the teaching of Jesus. A related problem is that Keener does not consider the NT teaching about the nature of marriage: nowhere do we find an explanation of the ‘one-flesh’ principle advocated by Jesus (Mt. 19:5f. & pars.) and Paul (Eph. 5:31; cf. 1 Cor. 6:16), which is the basis of the traditional view that marriage is indissoluble.

Keener argues (with many commentators) that when Paul says that the Christian is not under bondage (to their unbelieving spouse who wants to leave, 1 Cor. 7:15), this means they are no longer bound to the marriage but are free to remarry (p. 61). He does not notice 1 Corinthians 7:11 where Paul apparently distinguishes between separation/divorce and remarriage (denying the right to remarry for Christians). And Keener goes even further on 7:27f., which he argues applies equally to both divorced Christians and single Christians (again he doesn’t notice v. 25: the whole passage is responding to the Corinthian position regarding betrothed couples, so Fee, Conzelmann, Barrett).

In his conclusion Keener argues that, since both Matthew and Paul can give exceptions to Jesus’ teaching, we must allow for additional exceptions relevant to our modern culture (for example, pre-conversion sins should be disregarded, spouse or child abuse is grounds for divorce). I would not necessarily wish to disagree with this, only with the assumption that divorce assumes the possibility of remarriage (isn’t 1 Cor. 7:11 the relevant passage for Christian marriage breakdown?).

Keener provides a wealth of information in this book (and its notes) on matters relating to marriage and divorce in Jewish and Greco-Roman societies around the first century. While his conclusions will be appreciated by some, in my opinion his exegetical method is weak (and he is too brief); and he doesn’t interact with the major works on the subject. We all need guidance in the application of the Scriptures to a deteriorating modern situation (at least those of us in the West), but it should never be supposed that the collection of background information renders the traditional exegetical task redundant. Otherwise our reading of the cultural situation might dull the sharp edge of Scripture and render it unable to challenge us to repentance.