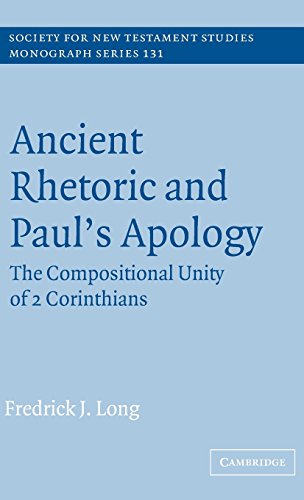 ANCIENT RHETORIC AND PAUL’S APOLOGY: THE COMPOSITIONAL UNITY OF 2 CORINTHIANS

Second Corinthians presents an interpreter with no few exegetical headaches. Perhaps chief among them concerns whether or not the letter as we now have it is a composite of several originally independent letters or a single composition. Contrary to the majority opinion, Long argues that 2 Corinthians consists of a singular ‘rhetorically unified apology’. Long’s conclusion rests on two bases. First, an extensive analysis of forensic oratory in the ancient Greco-Roman world demonstrates numerous parallels in terms of forensic arrangement, topoi, and idioms with Paul’s argument. Second, an examination of 2 Corinthians itself reveals a consistent set of apologetic aims.

After an opening chapter locating his thesis within the current state of 2 Corinthians studies, Long structures his work in two parts. Part 1 reviews ancient forensic discourse. In successive chapters, Long offers an overview of forensic rhetoric (ch. 2) followed by chapters treating forensic exigency, forensic invention, forensic disposition, and apologetic letters. Reading these chapters reminded me of my first tour through Margaret M. Mitchell’s Paul and the Rhetoric of Reconciliation (Mohr-Siebeck, 1991)—this is an education in ancient rhetoric. As with other such surveys, however, one wonders to what extent we can conflate the views of authors writing in Greek and Latin in different locations sometimes centuries apart. Furthermore, how much exact knowledge can we suppose Paul had of individual authors, especially those writing in Latin? Was Paul formally trained in the practice of rhetoric (as Long contends) or was this practice simply part of the cultural air he breathed?

Having established his view of ancient forensic in Part 1, Long proceeds to analyse 2 Corinthians in like manner by looking at the exigency, disposition, and invention in 2 Corinthians. Crucial here is exigency, ‘the perceived or actual historical circumstances that necessitated and gave rise to Paul’s letter’ (12). Long must demonstrate that his apologetic reading of the letter fits within a plausible reconstruction of Paul’s relationship to the Corinthians.

According to Long, 1 Corinthians offers evidence that Paul was subject to criticisms by the Corinthians early on. Long sees this especially in 1 Corinthians 9, a passage he regards as apologetic. Long then argues that Paul made no visit to Corinth between the writing of 1 Corinthians and 2 Corinthians (as is usually supposed) and that the ‘letter of tears’ (2 Cor. 7:8) refers to 1 Corinthians itself. Placing such stress on criticisms of Paul reflected in 1 Corinthians risks overstating the evidence and runs contrary to the standard rhetorical reading of that letter by Mitchell. Long then argues that by the time Paul writes 2 Corinthians, he must defend himself on two related charges of inconsistency. First, he had earlier said he would visit Corinth, but sent 1 Corinthians instead. Long considers Paul’s defence on this point as a unifying theme in 2 Corinthians. Second, the Corinthians regarded Paul as worldly with regard to his use of rhetoric and his concern for financial gain. Paul had denigrated worldly rhetoric in 1 Corinthians, yet used the same in that very letter. They also suspected that Paul sought personal gain from Jerusalem collection. On the basis of this reconstructed exigency, Long conducts a detailed examination of 2 Corinthians in terms of its disposition and invention as defined in Part 1.

As I have mentioned above, Long’s argument lies open to criticism in places. Nevertheless, he successfully demonstrates a high degree of forensic sophistication in 2 Corinthians and makes a strong ‘apology’ for the unified nature of the letter. This volume will certainly play as a central role in the ongoing discussion of Paul and ancient rhetoric. It also makes the most substantial argument to date for the unity of 2 Corinthians.