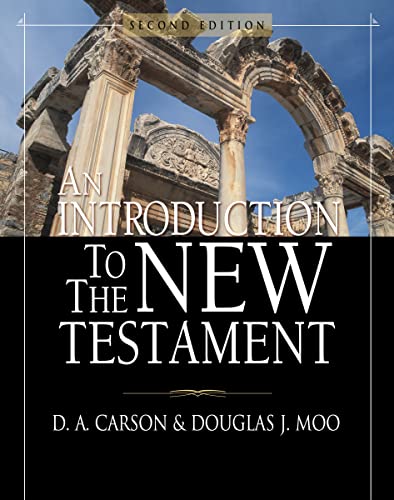 An Introduction to the New Testament

What is the best evangelical NT introduction for the beginning theological student? D. Guthrie has been the standard for more than two decades, but many students find his detailed review of scholarly theories ponderous (and now somewhat dated due to the fairly minimal revisions of the third, 1990, edition) and his writing style less than lively. R. Martin’s two volumes have proved much more readable, but especially in his introduction to various epistles, he departs from traditional conservative positions. Carson, Moo and Morris, colleagues during the term Morris was visiting professor at Trinity Evangelical Divinity School, have teamed up to try to rectify these problems and produce a one-volume work which is detailed yet succinct, fully abreast of current scholarship yet thoroughly evangelical, and stylistically clearer for student and teacher alike. In large measure they have succeeded. As of this writing, I have used their text with approximately 100 students in my seminary-level, introductory NT courses and have found it better received than either Guthrie or Martin.

An initial lengthy chapter entitled ‘The Synoptic Gospels’ surveys form, source and redaction criticism, the gospel genre, the new literary criticism, the quest for the historical Jesus, and gospel chronologies. Shorter individual sections then treat, in turn, each of the NT books, except for 1 and 2 Corinthians, 1 and 2 Thessalonians, the Pastorals, and the Johannine epistles, which are combined in their respective chapters. A brief discussion of ‘Paul: The Man and His Letters’ appears between the treatments of Acts and Romans, and a closing section on the NT canon rounds out the volume. Detailed name, subject and Scripture indexes made the work easily accessible. In the chapters on individual books, discussion typically proceeds from an overview of the contents to a consideration of authorship, provenance, date and circumstances of composition. Brief remarks on textual criticism or issues related to canonization may follow. Surveys of the book’s analysis in recent scholarship and its abiding contribution to the Christian faith proceed, accompanied by detailed, current bibliographies for further research.

Controversial conclusions are almost entirely predictable and parallel Guthrie’s. A modified ‘two-source’ hypothesis is the best solution to the synoptic problem. Form and redaction criticism are helpful only within strict limitations. Luke-Acts is to be dated to 62, pushing Mark back into the early fifties. Galatians is early (49) and of Southern provenance. The Pauline chronology very closely follows the work of F.F. Bruce. All of the various epistles come from the authors to whom they are attributed; even the gospels all stem from the various evangelists to whom they are traditionally ascribed. The new look on Paul (as with E.P. Sanders, et al) is not particularly accurate or helpful. Revelation is both prophetic and apocalyptic but, even more significantly, epistolary. Modern critical scholarship has its place, but it has often done great injustices to the text, particularly when the general reliability of historical narratives is impugned. The Christian canon formed gradually, but that does not mean that the church created it. Instead, it identified with growing clarity an already closed collection of authoritative books. About the only even mildly idiosyncratic conclusions in the whole volume are the very tentative identifications of the fourth gospel’s purpose as primarily evangelistic, and that especially for Jews, and of the location of Paul’s imprisonment during which he wrote Philippians as in Ephesus.

As with all multiple-authored works, there is unevenness of quality. The three writers individually have written commentaries on nearly half of all the NT books. The conclusions of those commentaries naturally re-emerge in their briefer treatments here. Carson’s expositions are the fullest, most notably of Matthew and John. Moo is next most helpful, particularly with Romans and James. Morris’s chapters are consistently the briefest and least-well documented, as, for example, with the Thessalonian epistles or the combined chapter on 1 and 2 Corinthians. As chief editor, Carson has added his own revisions to try to shore up some of these gaps, but these too appear unevenly.

It would have been helpful, too, if the authors had tried harder to applaud and appropriate the best of non-traditional scholarship. Even among evangelicals, for example, there are increasingly palatable theories of pseudonymity, a growing trend to date Luke-Acts after ad 70 (allowing for Mark to stem from the late-60s), important acknowledgment of the valid insights of liberation theology, and, above all, numerous significant analyses applying literary and rhetorical criticism, none of which garner much attention or approval in this volume. The authors deliberately chose not to supply formal outlines for each biblical book, but it is precisely here where some of the freshest and most convincing scholarship these days is occurring. Still, if the primary objective of Carson, Moo, and Morris was to improve on predecesors such as Guthrie and Martin in creating a ‘user-friendly’ textbook of conservative conviction, then they have accomplished that objective well enough. I cannot imagine assigning any different work to my beginning students in the foreseeable future.