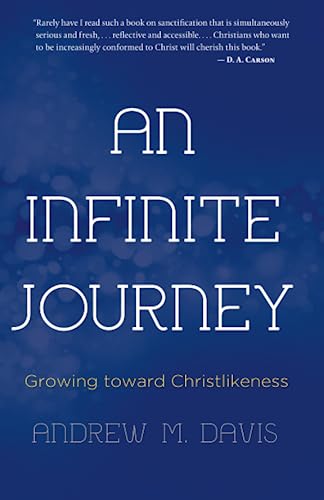 An Infinite Journey: Growing toward Christlikeness

An Infinite Journey: Growing toward Christlikeness is a clear presentation of Pastor Andy Davis’s pastoral teaching on progressive sanctification. Davis has been a senior pastor engaged in revitalizing a church in an urban setting for the past fifteen years. In this book, which presents a “thorough description of sanctification with all its component parts,” Davis is “seeking to instruct people concerning the fullness of the Bible’s teaching on Christlikeness, and to encourage people to strive daily to reach that goal” (p. 33).

An Infinite Journey cuts through much of the ongoing chatter in the law/gospel debate. Davis is a Calvinistic Baptist pastor who, like the Puritans, recognizes the majesty of God’s power both to save and sanctify while still commending the reader to mortify sin through spiritual disciplines. Though there are instructions provided in this book, the process that Davis recommends to foster sanctification is not legalistic and, while elegantly simple, it is not formulaic or trite. Davis avoids the one extreme of merely calling for more grace with little concern for personal holiness. Yet he also deftly evades the other extreme of many books on spiritual disciplines which focus on checklists outlining the basic how-to of Christian living. Instead, An Infinite Journey reflects the mind of an engineer as Davis develops a model that functionally describes how sanctification progresses in the life of a Christian. That is, Davis tells the reader how things work according to the Bible, not prescribing a surefire method for holiness.

Davis describes his model using the letters K-F-C-A, representing the words knowledge, faith, character, and action. These four parts form an ongoing cycle that he represents as an upward ramp leading toward perfect sanctification, which is a worthy, if unattainable, goal. The cycle of progressive sanctification is, therefore, an infinite journey. As Davis describes it, the cycle begins with knowledge, both factual and experiential. Experiential knowledge comes through the Christian life and factual knowledge is internalized information from Scripture. Knowledge then leads to faith, which is the “assurance of and commitment to spiritual truth” (p. 127). For Davis, faith is essential to both salvation and sanctification. Faith then leads to the development of character. For Davis, virtue is the reflection of Christian character. Davis describes five elements that feed into the development of virtue: affection, desire, will, thought, and emotions. Character is subsequently reflected in action, which includes both internal obedience to God in pursuit of personal holiness and external obedience in at least the seven areas that Davis describes. As Christians act out their character in obedience to God, this then results in further knowledge through the study of Scripture and experiential knowledge gained through continued obedience. So the cycle continues.

Davis presents his meticulously outlined model of progressive sanctification in six sections. Section 1 is introductory in nature, explaining the need for salvation and presenting an overview of Davis’ four-part cycle. The middle four sections each present one stage in Davis’ model of sanctification. Section 6 provides a recap of the model, some scriptural examples that show the K-F-C-A cycle in practice, and some very practical instructions for applying Davis’ model. The book concludes with an exhortation to pursue the infinite journey toward progressive sanctification for the joy of knowing God.

In An Infinite Journey, Davis is effective in fulfilling his purpose. He has written a thorough description of sanctification, and has very carefully constructed a scriptural and compelling exhortation to holiness. The outline of this volume is easy to follow, since Davis lays out his roadmap graphically with a diagram of the K-F-C-A model. Each of the many points of Davis’ outline is very carefully supported by thorough exegesis of biblical texts from across the canon, and each chapter is saturated with quotes, references, and allusions to Scripture. In addition to the use of Scripture, Davis also provides numerous practical illustrations throughout the book that help to make this text accessible.

The most significant strength of this text is the balance that Davis brings to the discussion. By carefully balancing the importance of spiritual disciplines with the intent of a pursuit of holiness, Davis manages to avoid legalism while still providing structure and direction to an important journey.

One potential downside of this text is its sheer length. With over four hundred pages of text, reading An Infinite Journey is a significant investment. However, Davis has structured the book with a clear outline, short chapters, and frequent section headings that help the reader follow his careful articulation of the K-F-C-A model. Additionally, though the book is long, Davis clearly has more to say, which keeps the discussion moving; he also avoids repetition. A second weakness is the lack of an index. Davis has carefully explained many biblical texts, making the lack of a Scripture index as a quick reference somewhat disappointing. Despite this weakness, the clear outline of the book will allow the volume to be used as a reference for emphasis on a particular aspect of sanctification.

This book is the best modern book on sanctification I have read; it is likely to become a standard text on the subject for years to come. It is written at a level that is accessible to a popular audience and yet so carefully argued and practically challenging that it would be a welcome addition to a seminary classroom or a scholar’s library.