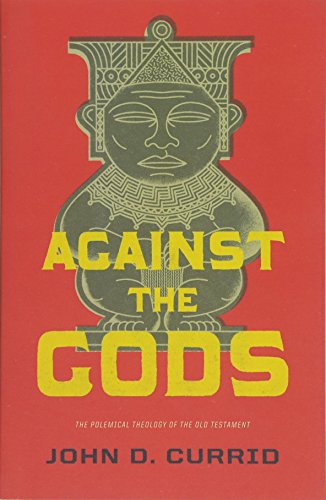 Against the Gods: The Polemical Theology of the Old Testament

In this ‘introductory work’ John Currid examines one aspect of the relationship of the Old Testament to ancient Near Eastern literature, what he terms ‘polemical theology,’ that is, biblical writers using ‘thought forms and stories that were common in ancient Near Eastern culture, while filling them with radically new meaning’ (p. 25). After ‘A Brief History of Ancient Near Eastern Studies’ (ch. 1), chapter 2 explains ‘The Nature of Polemical Thought and Writing’, then each of the nine subsequent chapters presents an example.

Clear cases of ‘polemical theology’ are evident in Hebrew poetry when ‘biblical authors take well-known expressions and motifs . . . and apply them to the person and work of Yahweh’ (p. 25, see ch. 11, ‘Canaanite Motifs’). However, Currid concentrates on narratives. Discussing creation accounts, he assumes the composer of Genesis knew ancient literature (p. 44) and consciously opposed it. Genesis 1 is not an adaptation of foreign myths, a demythologisation, as widely supposed. Whereas the ancient Near Eastern texts ‘are legendary stories without determinable basis in fact as history,’ Gen 1–2 is ‘historical narrative’ (pp. 43, 44), yet within it there is clear polemic against the theogony and polytheism of others. The similarities listed on p. 55 between the biblical and the Babylonian reports of the Flood have led many to assert the Babylonian versions underlie the Hebrew. (Irving Finkel, The Ark before Noah: Decoding the Story of the Flood [London: Hodder & Stoughton, 2014], is the most recent.) Others disagree, notably Gerhard von Rad, and the author claims the biblical narratives are true, whereas the others have ‘some kernels of historical truth . . . pagan authors distorted fact by dressing it up with polytheism, magic, violence and paganism. Fact became myth’ (p. 61). The biblical texts were written partly to discredit those versions. Babylonian Flood poems have famished, quarrelling gods afraid of the flood, who gather like flies over the survivor’s sacrifice, whereas in the biblical account God is in control and savours the aroma of Noah’s offering. Currid might have added that God’s rainbow was the sign he would never send another Deluge; the Babylonian goddess Ishtar swore by her blue bead necklace that the Flood should never be forgotten.

In considering ‘Joseph, the Tale of the Two Brothers, and the “Spurned Seductress” Motif’ (ch. 5), Currid makes the significant statement, ‘parallels and similarities between two stories do not necessarily determine the genre or historicity of either story. There is no reason one cannot be myth and the other historical narrative’ (p. 68, following James K. Hoffmeier). That is especially relevant to ‘The Birth of the Deliverer’ (ch. 6), the motif of the abandonment of a baby and its rescue and rise to eminence. Moses’ birth is the biblical specimen, Sargon of Akkad’s Birth Legend in Babylonian another (which is often taken as the source of the Exodus text), and the Egyptian myth of Horus and Seth a third. Limiting himself to a few ancient examples prevents Currid from noting how common the motif is—even down to Superman! Surely it is widespread because it is known to happen! Reality is visible in both Sargon’s and Moses’s biographies: riverine dwellers could entrust the infant to a reed basket to float away on the water where someone with business at the bank might find and adopt the babe. At maturity one out of many foundlings could rise to power.

In the case of Moses’s birth, the Egyptian myth of Horus offers such parallels that the author can say, ‘connection between the two stories is tight and clear’ (p. 83), and, ‘the writer takes the famous pagan myth and turns it on its head in order to ridicule Egypt and to highlight the truth of the Hebrew world-and-life view’ (p. 86). This raises the question of how well-versed in Egyptian, Babylonian, Hittite, Ugaritic and other traditions biblical writers may have been and how likely their audiences were to recognise the allusions. Would they be apparent to only a few highly educated Israelites? The Egyptian ‘Book of the Heavenly Cow’ has the god Re pronouncing, ‘I am that I am’ and two modern Egyptologists concluded the Egyptians borrowed the Hebrew epithet for God in Exodus 3, a conclusion Currid endorses after careful discussion of the divine name which he supposes the Hebrews knew long before Moses’ time and then forgot while in Egypt (ch. 8). Yet we may wonder if there need be any association.

Comparisons can be made too easily, however. While the use of Moses’ staff in the Pharaoh’s court may have had a polemical nuance, countering the symbolism of the staff in Egypt, the similarity is weakened when we observe the Hebrew word is not necessarily ‘of Egyptian origin’ (p. 112), for it has a cognate in Babylonian attested well before Moses’ time. An uncertainty runs through the book: did Hebrew writers consciously create their texts to counter those of other cultures, or was that a secondary aspect? Having composed their narratives, did they see similarities and so arrange their material to emphasise the differences? How can a factual basis be distinguished from polemic?

Some misunderstandings need correction. In the Sargon Legend the hero was not put in a basket ‘in the rivers’ (p. 78) only ‘in the river’, nor does a gardener rescue him ‘out of the goodness of his heart’ (p. 78), but ‘while drawing water’. Sargon does not become a ‘demigod’ (p. 86). The Babylonian Noah did not save himself because of bravery and human wisdom; the creator god Enki/Ea saved him because of his piety (p. 58).

John Currid’s book is welcome for exploring this subject and showing the need for further investigation to establish the unique aspects of the Old Testament.