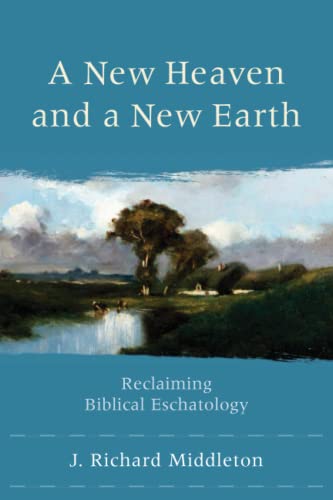 A New Heaven and a New Earth: Reclaiming Biblical Eschatology

The author is Professor of Biblical Worldview and Exegesis at Northeastern Seminary. His previous publications include the work on the meaning and significance of the image of God in The Liberating Image: The Imago Dei in Genesis 1 (Grand Rapids: Brazos, 2005). In important ways, The Liberating Image provides the foundation for the present work under review.

The Church continues to talk about “going to heaven” as the final destiny of the righteous. “Heaven” is opaque to most of us, however; it conjures up vague ideas of clouds, angels, and immaterial, otherworldly, “spiritual” existence. How this squares with the concept of resurrection—a renewed physical body patterned after the prototype of Jesus’s own resurrection existence—is unclear. Why would we need a resurrection body, if “heaven” is going to be home?

Concerned with how muddled assumptions about the future distort life now, Middleton provides a radical alternative to “heaven.” The vision is nothing less than the hope of a cosmic renewal, of a redeemed and restored creation as the true destiny of the righteous.

The author’s stated purpose is to sketch a “coherent biblical theology (beginning in the Old Testament) that culminates in the New Testament’s explicit eschatological vision of the redemption of creation” (p. 15).

To accomplish this goal, Middleton has divided the book into twelve chapters and an appendix. In Chapter 1, “Introduction: The Problem of Otherworldly Hope,” Middleton raises the fundamental issue that he seeks to redress. He explains “what is wrong with the traditional Christian view of heaven as final destiny” and then describes “the historical origins of this otherworldly idea in the innovative teachings of the Greek philosopher Plato” (p. 16). The Appendix, “Whatever Happened to the New Earth?” provides a sketch of “new creation” in the history of Christian thought. “The introduction and the appendix thus function as bookends for the main content of the study” (p. 16).

The body of the work consists of five parts. Part 1, “From Creation to Eschaton” (chs. 2–3), provides a “panoramic sweep of the biblical story of redemption” (p. 17). Part 2, “Holistic Salvation in the Old Testament” (chs. 4–6), argues that the OT testifies to God’s ultimate purpose to fulfill his original intentions for creation through flourishing human viceregency. Part 3, “The New Testament’s Vision of Cosmic Renewal” (chs. 7–8), argues that resurrection and cosmic renewal form the heart of the NT authors’ eschatological hope. In Part 4, “Problem Texts for Holistic Eschatology” (chs. 9–10), the author considers texts problematic for his thesis, while in Part 5, “The Ethics of the Kingdom” (chs. 11–12), he discusses its ethical implications.

Middleton is not alone in sounding the alarm and laboring to correct what he views as a dangerous misconception. The Appendix attests to a groundswell of recent interest in this topic. With the writings of such authors as N. T. Wright, G. K. Beale, and Randy Alcorn (as well as renewed interest in Ladd, Berkouwer, and Bavinck), holistic salvation has risen from the dead. The recent Gospel Coalition Conference held in April in Orlando featured “New Heaven & New Earth” as its theme, bearing further witness to this resurrection.

The book is well-written and well-organized. Several figures and tables break up the prose and provide visuals that help the reader to grasp concepts. The author’s passion for the subject infuses every page. The work is exegetically nuanced and theologically mature.

In thinking about areas that need further work, let me mention two. In Part 4, Middleton addresses texts that seem to call into question his paradigm of holistic and cosmic salvation. Many of these are passages that students have raised as I have attempted to set out a similar vision. Hoping for some help, I found the explanation of John 14:1–3 to be the least satisfactory (pp. 217, 228–29). While his proposed solution, “The Apocalyptic Pattern—Preparation in Heaven, Unveiling on Earth,” is suggestive, it does not answer all questions (see pp. 212–14). John 14:1–3 must be allowed to speak, lest we miss out on overhearing something important. I am as tempted as Middleton to run it over roughshod in my hurry to buttress my paradigm of new creation, but we must resist. John 14:1–3 refuses to be tamed so easily.

Second, in Middleton’s vision for resurrection life upon a renewed earth, he has overlooked the most significant reason for why we will dwell there (this same mistake is also made by some “heaven” proponents). Middleton stresses the cultural mandate and its fulfillment in the new creation, but this is not the ultimate goal of salvation. The ultimate goal is the glorification and enjoyment of the Triune God. At the aforementioned Gospel Coalition Conference, Dr. Scott Swain of Reformed Theological Seminary cautioned that, in our haste to correct misperceptions of heaven, we dare not lose the ultimate goal of the “Beatific Vision” (http://resources.thegospelcoalition.org/library/your-eyes-will-behold-the-king-in-his-beauty-exploring-a-missing-element-in-earthy-evangelical-eschatology). We have not been created to build culture to the glory of God, but to know and enjoy and see and glorify God, who also grants us the privilege to build culture to his glory.

I strongly recommend this book. I agree with Donald Hagner, who, endorsing the book, wrote that “it could serve admirably as a basic textbook on biblical theology.” Yes, and so much more. If every evangelical student from Anchorage to Addis Ababa would pick up and read, it could revolutionize global Christianity.