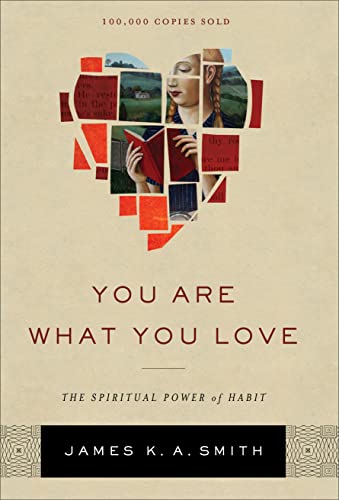 You Are What You Love: The Spiritual Power of Habit

Written by James K. A. Smith Reviewed By Matthew Westerholm
Ethics and Pastoralia

James K. A. Smith has given substantial consideration to the complicated relationship among beliefs, desires, actions, and practices. His newest book, You Are What You Love, outlines his scholarly work in the field with a practical bent for Christian homes, churches, and vocations.

Smith believes that much of contemporary Christianity has followed Enlightenment thinking by giving human cognition undue pride of place in the role of personhood. This overly cognitive view of human identity tends to view human emotions and behavior merely as the mechanical result of human thought—more or less, with apologies to Descartes, “I think, therefore I behave.” Smith’s scholarship has pointed out that this view does not account for the shaping effects of practices, and over time he has assembled an unlikely alliance of neuroscience, monasticism, and contemporary phenomenological philosophers to argue that actions, particularly repeated actions, influence upon human cognition and understanding.

Smith’s interest appears to be much more than scholarly, however, and he brings to You Are What You Love an apparent conviction of how deeply entrenched is an overly-intellectualized anthropology within the modern perspective and the contemporary church. Bridging his findings between the scholarly and the pastoral, the book cautions and instructs that the practices of corporate worship are deeply formative. Smith argues that liturgical actions carry weight even when the mind does not “understand” the meaning behind them. He sees a virtue in “going through the motions” which, while less than ideal, can lead to a sort of implanting of gospel principles and a resultant shaping of a person’s outlook: “Christian worship doesn’t just teach us how to think; it teaches us how to love, and it does so by inviting us into the biblical story and implanting that story in our bones” (p. 85).

Smith’s project is very appealing, not least for local worship leaders who, unaware of the deeply formative effect of their services over the years, are placing the ark of God’s presence on the oxcart of popular song form. The contemporary evangelical church is emerging from a liturgical slumber. Local church practitioners have a new recognition of their responsibilities for the worship of their congregation, as well as the risk of abdicating those responsibilities to an often well-intentioned, but commercialized industry.

Today’s worship leaders desire to be taken seriously as thinkers and pastors. Many recognize some incongruity between the soteriological doctrines of grace they have embraced and the dominant worship paradigms they practice. That is, evangelical worship leaders feel the dissimilarity between their Calvinist bookshelves and the tendencies toward a Charles Finney revivalism in their liturgical patterns. You Are What You Love offers a robustly reformed call for worship leaders to embrace their essential role in the disciple-making commission of the church.

In my review I was pleased to note the extent to which this book celebrates the locality of the local church. Many paradigms of contemporary worship have been derived from parachurch ministries: Christian conferences, radio stations, worship “concerts,” and worship recordings. These are edifying in their own way. However, the ongoing worship gathering of the local church has goals and responsibilities (and privileges!), if only by virtue of their regularity—but more than that, by virtue of the role of corporate worship in the life of a believer —that such paradigms do not have the power to approach. Smith places appropriate emphasis in these matters.

That noted, You Are What You Love is more than lessons for worship leaders. Smith’s book provides rewarding and challenging insights to those who want their Christianity to inform and reform not only their worship services, but also their homes, their youth groups, and their vocations. It is written for those who seek this reward not as a matter of assent, but as a matter of application.

Given the ambitious scope and claims of Smith’s scholarship, it is not surprising that his work both provides answers and raises questions. Some have sought to criticize Smith by pointing out the dangers of viewing the relationship between practices, cognition, and affection as a one-way street. However, to hold Smith as arguing that practices affect only cognition, and not vice versa, is an unfair reading; indeed, he has vigorously defended against that accusation (“We Need More Than Liturgy: Agreed,” Fors Clavigera, 22 August, 2014, http://forsclavigera.blogspot.com/2014/08/we-need-more-than-liturgy-agreed.html).

A more valid line of inquiry arises in that Smith sees his project as growing out of Aristotelian views of virtue formation, this in keeping with medieval theologian Thomas Aquinas and the contemporary moral philosopher Alistair MacIntyre. For all its pedigree and contemporary advocacy, however, Aristotelian virtue formation has not been received uncritically. Smith’s own writing has trained his readers to be suspicious of this very question: Is habit formation a morally neutral machine that can be appropriated by Christian discipleship? If Aristotle’s project of virtue formation-through-habit itself is to be a secular liturgy, then incorporating Christian liturgical practice into Aristotle’s paradigm could simply exchange one liturgy for another, with Euthyphrian implications. The long history of Christian thought rightfully imposes a certain amount of suspicion for fitting the gospel of God into other paradigms.

An illustrative concern from Aristotle: the crowning virtue of the Nichomachean Ethics is “magnanimity” (1124A.2). According to Aristotle, the magnanimous person is self-sufficient (1125A.12) and maintains superiority over others by giving more than they receive (see 1124B.12). By Aristotle’s account, a “great-souled” person “thinks himself worthy of great things and is really worthy of them” (1123B.3) thus avoiding the erroneous extremes of vanity and false modesty and finding the virtuous middle path. The Christian tradition affirms Aristotle’s hunch by confessing God’s self-sufficiency (divine aseity). God’s eternality and sheer originality means he must always give more than he receives. Likewise, Christian worshipers affirm God’s worthy nature and his delight in that nature. But if this is a crown of virtue, Christians believe that only a sovereign God is fit for such a crown.

The building of New Jerusalem on the foundations of Athens always has its difficulties: some of Evangelicalism’s historical suspicion of habituation and virtue formation finds its root not in the autonomy of enlightenment anthropology but in the potential that habituation of virtue formation would emphasize efforts rather than the gospel of grace. An Aristotelian view of virtue formation that is to pass biblical muster must account for the idea that only God passes the Nichomachean Ethics test of a self-sufficient and magnanimous person, as well as the divine initiative needed to find a virtuous middle path.

This is not a critique of Smith’s paradigm or his execution, but a recognition that any new emphasis on human activity invites further exploration of the implications. What are the distinctions between, say, the human activities which drive a virtue seeker toward magnanimity and the activities that lead a disciple toward Christ-likeness? And is there correlation between denominations who prize historical liturgy and Christian maturity? Anecdotally the evidence is not strong, and the point bears ongoing exploration.

These points notwithstanding, Smith’s book is recommended reading for Christian leaders of all sorts, and essential reading for worship service planners. Evangelical worship leaders owe Smith a tremendous amount of gratitude. He is philosophically aware and theologically articulate. The bookshelves in this field have not often enough benefited from someone of his wide learning and love for the local church. This book and the resulting conversation it will generate will benefit Christ’s church for a long time to come.