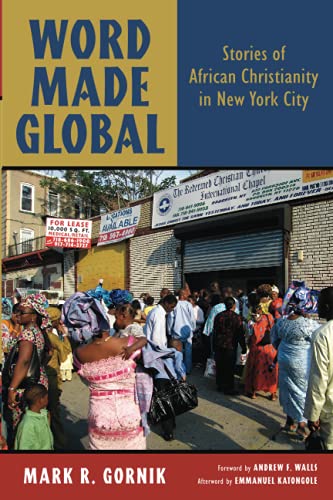 Written by Mark R. Gornik Reviewed By Jason A. Carter
Mission and Culture

Today nearly one out of every four Christians lives in Africa. This changing “center of gravity” of the world Christian movement has prompted Andrew Walls to claim that “anyone who wishes to undertake serious study of Christianity these days needs to know something about Africa” (International Bulletin of Missionary Research 24:3 [2000]:106). While the demographic changes of the global church have become almost yesterday’s news among students of World Christianity, many people still get no further than maps, graphs, and statistics. In Word Made Global, Mark Gornik (Director of City Seminary, NYC) takes us beyond demographics in providing a colorful mosaic of Christians in New York City whose customs of praying, ways of reading the Scriptures, and modes of living missionally are all informed by the dynamism of African Christianity.

Though interacting with themes such as globalization and urbanization, the real strength of Word Made Global resides in its ethnographic portrayal of the spirituality, theology, and Christian mission embodied and articulated by three NYC diaspora congregations from West Africa: the Presbyterian Church of Ghana in Harlem, the Church of the Lord (Aladura) in the Bronx and the Redeemed Christian Church of God International Chapel, Brooklyn. The congregations represent three of the dominant streams of Protestant Christianity in Africa: historic/mission-founded, Independent/Indigenous (AICs), and Pentecostal/Charismatic.

After a succinct overview of African Christianity and its diaspora churches in New York City as well as an interesting migratory history of the city in chapter one, chapters two (“Pastors at Work”) and three (“Liturgy and Life”) undertake a biographical portrayal of the spiritual leaders of the three churches and the dynamics involved in birthing a church in a global city. Chapters four through six represent the theological center of Word Made Global as Gornik engages in a descriptive analysis of three dominant ecclesial practices: prayer, appropriating the Scriptures, and mission. Chapter seven gives an account of “reverse pilgrimages” as depicted in sacred events celebrated in the three church traditions in Africa which have been reframed in NYC to foster a sense of community and religious belonging across geographical boundaries. For the quintessential snapshot illustrating the rise of global Pentecostalism, one may need to look no further than the Redeemed Christian Church of God—“considered the fastest growing Pentecostal church in Nigeria and Africa” (p. 110)—which celebrated its “Ninth Annual North American Convention” for three days at the most recognizable public venue in New York: Madison Square Garden (pp. 222–23). African Pentecostalism, even across the Atlantic, has indeed come of age. Finally, chapter eight explores the faith of the second generation of Christians and the future of African Christian diaspora churches.

As studies of African Christianity are often dominated by anthropologists and social scientists, Word Made Global is refreshing in that Christian practices and theological reflection within the NYC churches are prominently featured. An entire chapter devoted to the spirituality and dynamics of prayer undoubtedly reflects Gornik’s own pastoral experience and involvement in theological education. Gornik writes, “What do I know without ambiguity after my years of worshiping with African Christians? They pray. They pray standing up, they pray moving around, they pray kneeling down, they pray in loud voices, they pray all night” (p. 127). One question which Gornik raises is whether such prayers center upon an attempt to manipulate God in order to produce external pragmatic benefits—the prosperity gospel being the most conspicuous example. Interestingly, despite highlighting the earthiness of the prayers in all three churches, Gornik concludes, “I did not recall hearing a prayer that suggested God would materially reward faith or prayers” (p. 157). Yet Gornik’s reluctance to highlight the prosperity gospel as an identifying feature of the Redeemed Christian Church of God—the General Overseer E. A. Adeboye in Nigeria owns a private jet (Sunday Oguntola, “Private Jets for Jesus,” Christianity Today, Dec. 10, 2012)—seems to mitigate against his more “positive” portrayal of the diaspora churches. Moreover, Gornik’s suggestion that the African diaspora churches would do well to promote a more robust and healthy connection between a theology of suffering and the cross with the power of the resurrection in a concluding chapter (pp. 275–76) seems inconsistent with his earlier dismissal (pp. 150–59) of any vestiges of the prosperity gospel in those very same churches.

With respect to missional praxis, Gornik prefers not to utilize the term “reverse mission” which connotes a re-evangelization of the West to characterize the practices of the diaspora churches. Rather, the churches engage in “mission intertwined with migration” (p. 182). Gornik suggests that such “missionaries” raise no financial support, require no language training and do not go home on furlough. These migrant missionaries live as residents in a global city and pursue employment options in their vocations while participating in churches which empower ministry through de-centralized ministry structures (pp. 208–209, 215). The underlying challenge to the traditional Western missionary paradigm, steeped in structured bureaucracy and dependence on Western money, is deeply instructive.

Despite a few qualms, Word Made Global represents an outstanding contribution which helps us move beyond the mere demographics of World Christianity. As Walls recognizes in the foreword, “this is not only a book about diasporas” (p. xii) but about the wider contours and trajectories of the rise of the Christian faith in Africa and the themes and theologies currently characterizing African Christianity.