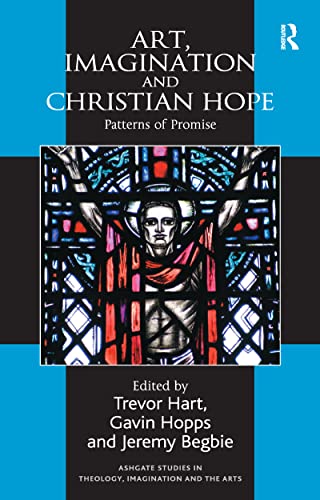 This work is a cross disciplinary collection of nine essays that deal with Christian hope in relation to art and literature. Most of the articles originated in the 2006 colloquium on “Imagination, the Arts and Christian Hope” at the University of St. Andrews. The essays impressively cover a wide variety of topics ranging from poetry, literature, visual art, music (classical and pop), architecture, to psychological and historical studies. They also employ wide variety of approaches informed by such disciplines as history, empirical psychology, philosophy, theology, and literary criticism. One note of interest regarding the last is that at least three writers apply, without naming as such, a deconstructive reading to their texts: Bauckham on Woolf, Longenecker on Saramago (in his portrayal of Joseph), and Hopps on Morrissey. This is no surprise as Woolf, Saramago, and Morrissey are no friends of Christianity. Yet our writers, through their close reading, skillfully bring out the fact that the three “atheists” cannot avoid but present a version of “Christian” hope in their works. The below are brief summaries of each of the nine essays:

Richard Bauckham’s “Time, Eternity and the Arts” analyzes Virginia Woolf’s To the Lighthouse and Claude Monet’s water-lily paintings. Bauckham sees in them the convergence of two notions of time: the evanescent present and the (thought to be) unchanging eternal: Woolf’s and Monet’s “gift to us is the intensive experience of the evanescent moment, the temporary but transformative indwelling of its absolute presentness and its potential eternity” (p. 30).

Paul Fiddes’s “Patterns of Hope and Images of Eternity: Listening to Shakespeare, Blake and T.S. Eliot” portrays five characteristics of eternity: Shakespeare presents it “as an expression of value and beauty” and “as an open future”; Blake “as the wholeness of human life and as a moment of crisis” (p. 46); and Eliot as the time of healing for the broken self. Fiddes believes that eternity is not the timelessness into which we escape but is the time when we experience all these characteristics in a new way.

A. N. Williams’s “Space and Time: Eschatological Dimensions of Christian Architecture” analyzes three liturgical structures (Dura Baptistery in Syria, San Vitale in Ravenna, and Saint-Denis in Paris) to show how each brought out, through the interaction between the structure itself and the movement of both the clergy and the worshippers within it, eschatological realization in the worship: “Worship is . . . a participation in the life heaven in the here and now . . . made real for the embodied in the many houses of worship that are the architecture of the Christian community” (p. 66).

Daniel Chua’s “Echoes of Hope in Monteverdi’s L’Orfeo and Beethoven’s Fidelio” contrasts two different kinds of echoes representing two different types of hope. The first is a negative, Orphic one that Theodore Adorno sees in his analysis of L’Orfeo and Beethoven’s “Les Adieux.” Chua calls this the apophatic hope: “because echoes always come afterwards, hope is always too late . . .” (p. 83). The second echo, which Chua sees in Fidelio, brings a providential hope, “not the delayed self-knowledge of fate, but the delayed revelation of hope” (p. 89). This latter echo, Chua contends, provides an answer to the question, “What does hope sound like?”

Kristen Deede Johnson’s “Brave New World? Faith, Hope and the Political Imagination” surveys the history of millennialisms. In particular, she shows how the “reimagining” of present reality in the light of the hope for the future shaped the political involvement of the postmillenialists and the dispensational premillennialists of the late nineteenth and early twentieth century United States.

Patricia Bruininks’s “The Unique Psychology of Hope” studies how the term “hope” is used in contrast to such analogous terms as “optimism” and “wish” by a group of college students. She finds that “hope” distinguishes itself from its synonyms in two features: it “goes beyond assessment of future prospects,” and “it involves active engagement with that outcome” (p. 126).

Bruce Longenecker’s “The Challenge of a ‘Hopeless’ God: Negotiating José Saramago’s Novel The Gospel according to Jesus Christ” sees that Saramago’s work “qualifies as one of the cornerstones in the edifice of contemporary disavowal of God, offering a depiction of a ‘hopeless’ God” (p. 134). Rather than dismissing it, Longenecker exhorts the church to use it as a means for reflective self-criticism that leads to living out the biblical mandate of care and justice to demonstrate the legitimacy and the attractiveness of the gospel (p. 146).

Gavin Hopps’s “Hoping against Hope: Morrissey and the Light that Never Goes Out” examines the pop singer’s negative and pessimistic lyrics and finds in them “the unsettling pressure of a residual hope, negatively indicated by the will to unhope” (p. 152).

Finally, Trevor Hart’s “Unexpected Endings: Eucatastrophic Consolations in Literature and Theology” uses J. R. R. Tolkien’s neologism “eucatastrophe” (a “good catastrophe”) to show that the resurrection of Christ is not an expected happy ending that mitigates the absolute tragedy of the crucifixion that preceded it. The Christian hope is euchatastrophic in that it contradicts and subverts the crucifixion “in the most outrageous and undeserved and unbelievable fashion” (p. 188).

This book is a very thought-provoking collection of essays. Each one in its own way gives an answer to the Nietzschean critique of Christianity as a “Platonism for the masses” by showing how the Christian notion of hope in the reality of eternity does not have to take on the other-worldly form detached from the life “here-and-now.”

My main criticism of this collection is its general lack of explicit scriptural connections (with the exception of Hopps’s and, to a lesser degree, Longenecker’s and Hart’s articles). If its aim is to encourage the church to pursue “its own calling to bear faithful witness and give account of the hope which is in it” (p. 3), it would have been desirable if the essays had discussed more extensively how each vision of eternity and hope relates to or goes against the scriptural one. For instance, Bruininks lists and describes four tendencies in a personality trait of hopefulness: a future orientation; a propensity to experience positive emotion; perseverance; and imaginativeness (p. 127). Here, she forgoes a great opportunity to elucidate the Apostle Paul’s characterization of hope in Rom 5, for example. Similarly, both Bauckham and Fiddes could have easily discussed (to use the Heideggerian term, as they both draw from his work) the “anticipatory resolute” nature of the Christian hope for the eschaton in 1 John 3:3. The readers, however, are left to draw such connections on their own.