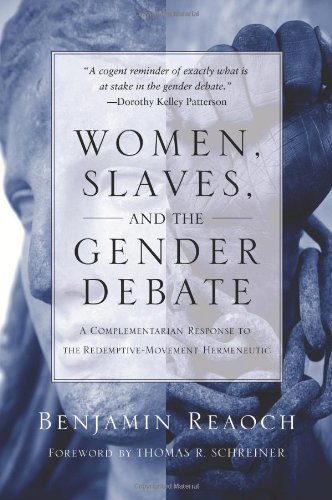 Women, Slaves, and the Gender Debate: A Complementarian Response to the Redemptive-Movement Hermeneutic

RMH-interpreters argue that “there are indications in the Bible that move us beyond the specific instructions of the Bible and toward an ultimate ethic” (p. xvii, emphasis original). Believers must follow the trajectory that the NT sets and even, in some cases, move beyond specific restrictions of women’s roles found in the NT. Proponents of the RMH suggest that while the NT does not specifically renounce women’s submission, it sets a trajectory (RMH is also called the “trajectory hermeneutic”) that leads to the equality of the sexes. Further, many RMH scholars draw parallels between the gender debate and the slavery issue. Consequently, they maintain that, as the NT establishes an ethic that ultimately led to the manumission of slaves, so too it frees women.

Arguing from a complementarian perspective, Reaoch rejects a RMH. He summarizes his main argument as follows:

The significant differences between the New Testament instructions to slaves and women seriously undermine the conclusions made by the redemptive-movement hermeneutic. The fact that the New Testament “points beyond” the institution of slavery does not indicate that it likewise points beyond God’s design for gender roles. (p. xix)

Chapter 1 surveys proponents of a RMH and reviews complementarian responses. Specifically, he identifies Krister Stendahl’s 1966 publication The Bible and the Role of Women as a forerunner for the RMH. Reaoch explains that Stendahl’s ideas have been endorsed and expanded by R. T. France, Richard Longenecker, David Thompson, William Webb, Kevin Giles, and I. Howard Marshall. Near the end of the chapter, Reaoch offers preliminary observations about how complementarian theologians Wayne Grudem, Thomas Schreiner, and Robert Yarbrough have responded.

Chapters 2–3 trace NT teaching on the slavery and gender issues. Although some proponents of a trajectory hermeneutic claim that the case for slavery is just as strong as the case for women’s submission in the NT, Reaoch demonstrates differences between how the NT treats these issues. First, he considers important texts about slavery including a lengthy discussion of the book of Philemon. Reaoch concludes that although Paul does not directly condemn slavery in Philemon, he does “undermine it [slavery] by setting master and slave on equal footing” (p. 39).

Second, Reaoch interacts with seven NT passages that address the role of women. His discussion of a few of these texts deserves mention. For instance, he criticizes the view of some scholars who claim that 1 Tim 2:19–25 teaches that women are more gullible than men. William Webb, a major voice for the RMH, explains that Paul could speak this way of women’s naivety because first-century women did not receive adequate education. Reaoch demonstrates, however, that Webb’s assumptions about this text are unproven and responds by saying that 1 Tim 2 does not address the gullibility of women. Further, Reaoch explains that Webb’s assumptions about the intellectual capacity and educational pedigree of first-century women are wrong. Later in the chapter, Reaoch discusses the silence of women in 1 Cor 14. He assumes that this silence is not absolute silence because of Paul’s earlier discussion of women praying in the church (1 Cor 11). Unfortunately, Reoach’s treatment of 1 Cor 14 falls short of his thorough exegetical analysis of other related texts. He fails to discuss various scholarly opinions on the silence of women and does not offer sufficient justification of his view that women must refrain from judging the prophecies of men (p. 64). A final note about Reaoch’s treatment of key NT texts about women involves his omission of at least one relevant text. Although Reaoch addresses the submission of slaves in 1 Cor 7:21, he fails to treat the parallel exhortations to women in 1 Cor 7:14–15. Further attention to ground and result clauses in these verses might contribute to a fuller picture of a woman’s obligations within marriage.

Reaoch draws similarities and differences between what the NT says about gender and slavery in chapter 4. One important similarity is that both slaves and women were instructed to submit for evangelistic purposes. An important dissimilarity between NT texts on gender and slavery is that women’s submission is grounded in the creation narrative, whereas the NT never teaches slaves to submit to masters because of a pattern established in creation.

Chapters 5 and 6 analyze Webb’s hermeneutical criteria and make the following observations. First, Reaoch fundamentally agrees with Webb’s view of theological analogy. Some explanations of theological analogy state that when practices are rooted in God’s character they are transcultural. In other words, if NT authors call for obedience on the basis of God’s personality, then interpreters must strictly adhere to what the NT author says. Webb suggests, however, that sometimes theological analogy is mixed with cultural components that make following the exact practice of the original admonition unnecessary. Although Reaoch disagrees with much of Webb’s exegesis in this section, he ultimately concurs about how much weight should be given to theological analogy. Second, Reaoch demonstrates that Webb’s concepts of “preliminary movement” and “seed ideas” are too subjective to hold much value for interpreters. Webb describes preliminary movement as NT authors pushing society away from archaic practices. Webb believes that NT authors planted seed ideas within their texts to encourage believers to go beyond the cultural norms of the first century. NT authors went as far as they could go at the time since they did not desire to create an immediate cultural revolution. Modern interpreters must move beyond culturally bound scriptural instruction to broader positions rooted in an ultimate ethic. In response, Reaoch capably argues that Webb does not give sufficient criteria to determine whether a text indicates movement away from first-century cultural norms. Third, Reaoch describes Webb’s preference of “new creation” (i.e., “redemption”) principles instead of those found in “old creation.” In response, Reaoch demonstrates that both old and new creation teach the submission of women.

Reaoch’s treatment of the RMH is well-balanced and fair and sheds much insight on key NT passages related to the role of woman. His work agrees with other complementarian responses, but he offers a more thorough and systematic analysis of the key NT passages related to the submission of slaves and women. Of special note is his comprehensive discussion of every ground and purpose clause in these texts. Both egalitarians and complementarians should consult his work as they wrestle through the implications of NT teaching.