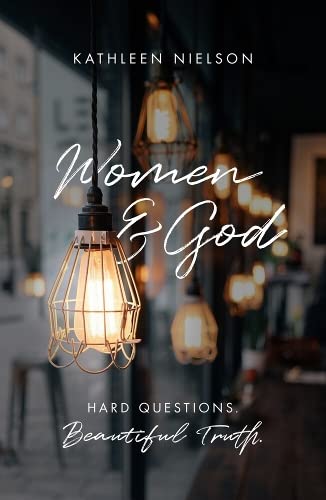 Kathleen Nielson is no stranger to writing about women and God. She has authored several books and Bible studies, and edited volumes on the topics of women and women’s ministries. So what does her latest book add to this already comprehensive library?

While at first glance this is a book about women, it is also, if not primarily, a book about God. It is, as the title suggests, a book about women and our relationship with God. In her introduction, Nielson poses a question, which becomes the lens through which the book is written: “Is God is sexist?” (p. 11). That is, does God have a bias against women, even though they, like men, are his images bearers? It’s not a new question, of course. But in the era of #MeToo, rejection of (often sinful) patriarchal models and practices, along with ongoing disputes about how women should serve in the church, genuine questions about the goodness of God toward women find fertile ground. The aim of Nielson’s book, therefore, “is to ask how the God Christians believe in views women, and to address fears that he may not view them entirely positively” (p. 11). To fulfill this aim, she traces how God has related to his female image bearers throughout the Bible.

So does Nielson present a compelling case that God isn’t in fact sexist? I won’t be spoiling anything by revealing that she does indeed conclude that God positively affirms the equality and dignity of women with men as his image bearers. From an overview of the biblical material, Nielson contends that passages which may appear at first glance to show God discriminating, marginalizing or relegating women, actually reveal his protection, affirmation and love for them. She seeks to challenge views which lead some to conclude from Scripture that God doesn’t value women. In fact, by highlighting and unpacking some interesting and often little examined texts of Scripture, she demonstrates that the opposite is true. As a result, Nielson’s efforts help us to have a right understanding of God’s view of women.

In chapters 1–3, Nielson examines the early chapters of Genesis, particularly the relationship between men and women and their joint-rule over God’s creation, while her final chapters (9–11) examine marriage and the principles and practices governing women serving in the local church. While these chapters contain interesting comments and conclusions about the distinctiveness of women, it is the middle section of the book (chs. 4–7) which is most likely to grab the reader’s attention. Here Nielson unpacks some of the more difficult, and often avoided, passages of the Old Testament. The reader is thus brought into the mess of community life in Israel and how the complex and intricate details of the law reflects God’s care and protection of women. Chapters 4–6 deal with divorce, sexual immorality, abuse, and uncleanness, and chapter 7 contains a thought-provoking exploration on the nature of the female body.

Throughout the book Nielson exercises a strong and sensitive pastoral tone. She recognizes the genuine struggle that some people, especially women, bring with them to the Scriptures and the difficulties caused by the issues mentioned above. She doesn’t dismiss these struggles in any way but carefully and gently seeks to show how God’s word reveals his loving, just and gracious character. In each chapter she helpfully directs us to Christ, where our ultimate identity is found.

And yet, if I had any frustration with the book it was with these important middle chapters. Here I often felt that more depth and detail was needed. In chapter 7, for instance, as Nielson engaged with the issue of exploitation of female bodies and the “deep pain” wrought by this “deep perversion of God’s good creation of human bodies, especially female ones” (p. 117), I wanted her to continue to explore the issues of slavery, exploitation, and infertility. Nevertheless, as the book unfolded, I was left with a deep appreciation of Nielson’s willingness to recognize these injustices and how they affect women today. I was also impressed by the way she reorients us back to God and his plan for and goodness towards women from creation, through salvation in Christ and into the new creation.

Overall, I believe Nielson has given us an excellent companion to other works in this field. One mistake to avoid is to think this as a book for only for women. We all need have our hearts and minds informed by the Bible, especially when it comes to how God views his image bearers. Too often, when a book is written discussing the nature and service of women, it doesn’t make its way past the women’s Bible study group. Yet it is just as important for men to read this book as they seek to encourage their Christian sisters in finding confidence in God’s love of them.