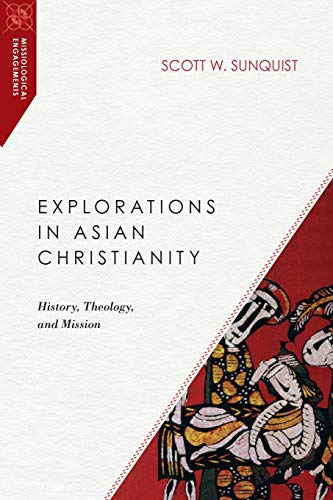 Asian Christianity has experienced significant growth over the past century and is drawing increased attention. This makes Scott Sunquist’s eclectic Explorations in Asian Christianity a timely introduction to this important subject. The book is primarily a work of church history and Christian theology. These two themes are woven together throughout. Sunquist’s personal experience of Asian Christianity, including eight years of teaching at a seminary in Singapore, allows him to engage this topic with cultural sensitivity and nuance.

The book’s second section offers theological reflections on the globalization of Christianity and the writing of Christian history, with special reference to Asia. Chapter five calls for writing Christian history from the standpoint of mission, focusing on marginalized groups, how Christianity incarnates in local cultures, and how it transforms societies. Sunquist’s goal is to shift the study of church history from a preoccupation with theological debates to a focus on mission. This chapter compares Christianity to a thin red thread in history, small and vulnerable, yet paradoxically having great transformative power. Sunquist also observes that Christianity often withers where it gains political influence but re-emerges from the margins of society.

The sixth chapter looks at the famous World Missionary Conference in 1910 in Edinburgh. Delegates failed to predict the coming Christian explosion in Africa and South America, being more preoccupied with China and India. Sunquist sees this as a salutary reminder that the global advance of Christianity is ultimately a divine work, not something achieved through reliance on human technology and skill.

Chapter seven argues that the notion of linear time, which is integral to Christianity, brings hope. It challenges the dominant cyclical conception of time in mainstream Asian culture. At the same time, he warns against over-realized eschatology, where groups try to achieve the future Christian hope of a perfected world in the present, which echoes themes from chapter six. Chapter eight notes that with the rise of indigenous churches around the world, church history is no longer about the West, but rather global Christianity. By adopting a global perspective, Sunquist believes that church historians can open up space for local theologies and the address local concerns.

The third section consists of theological reflections on Christian missions, primarily centered on the historical dimension of Protestant missions in Asia. The ninth chapter looks at Protestant missionary efforts in Korea. Sunquist describes how the conservative theology of the missionaries and Korean Christians led to a surprising level of social and political engagement, which had a major impact on the development of Korea. Chapter ten constructs a “theology of place” focused on Shandong Province. The chapter demonstrates the centrality of Shandong to the development of Christianity in China. Chapter eleven further examines Christian missions in Korea and Shandong by contrasting how “three-self” ideas about missionary work were applied in Korea as compared to China. This is probably the most substantive chapter of the book. The twelfth chapter constructs a theology connecting migration and missions. Unfortunately, the subject is defined so broadly that it becomes mostly just descriptive in nature, lacking significant explanatory power.

The book’s final section of the book considers the theme of education. Chapter thirteen highlights three missionaries–– Julia Mateer in China, Samuel Moffett in Korea, and Don McClure in Africa, who were involved either full-time or part-time in education. Though the individuals chosen were interesting and inspiring people, the chapter overall lacks focus.

The fourteenth chapter is particularly useful. It explores how Christian higher education in China changed from a more religious focus in the nineteenth century to a more secular focus in the twentieth century. Sunquist argues that this secularization was a result of Christian missionary educators in China both developing close links with American big business and embracing the secular ideology of social progress. The concluding chapter explores theological education in ancient Asia in order to gain insight for theological education in Asia today. Unfortunately, the subject is too broad to provide highly useful insights.

Explorations in Asian Christianity is a useful addition to the growing literature on the history of Christianity in Asia. Despite its many good insights, the book has its flaws. The most serious weakness is the disjointed nature of its chapters. Originally written as stand-alone essays, they do not cohere well as a book. The lack of a coherent structure and content makes for a fairly difficult read. Related to this, certain incidents are repeated two even three times in the book. More effort editing and finding alternate stories would have improved the book.

Furthermore, the author often speaks in negative terms about Western Christianity (e.g., a Western “captivity” of Christianity, Western Christianity as the main source of theological divisions). While these observations have historical basis, they come across as overstated and one-sided. Little mention is made of the many positive aspects of Western Christianity. Sunquist’s frequent reference to the important role of Pentecostal Christianity in the growth of the global church over the past century is welcome. However, at one point (p. 157), he uses the term “spiritual Christianity” to describe such groups, which unfortunately implies that other Christian groups are not spiritual. More practically, the book’s index is not very thorough.

Nevertheless, there is still much of value in Sunquist’s book for those seeking to better understand Asian Christianity. Efforts to read the book will be rewarded.