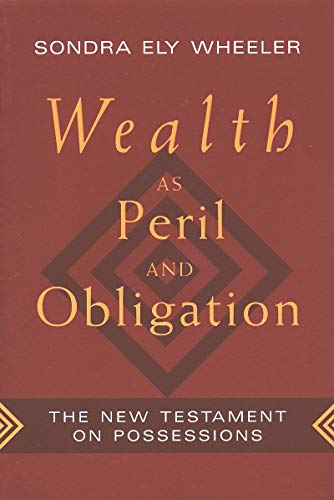 Wealth as Peril and Obligation: The New Testament on Possessions

Two important new books on spirituality have rolled off Eerdman’s presses. The first is primarily exegetical. Wheeler, Assistant Professor of Christian Ethics in Wesley Seminary, Washington, D.C., authors a slim volume which aims to determine how the NT canon can ‘form and inform the contemporary moral discernment of the church regarding the hold and use of possessions’ (p. xv). Wheeler begins by reviewing five influential contemporary proposals for determining Christian ethics from biblical data. Finding none of them entirely adequate, she constructs her own eclectic methodology, which involves sociological description and an awareness of both the unity and diversity of the Bible’s teaching on various ethical themes. Stressing the need to take all of the canonical material into account, she nevertheless insists on discerning levels of authority based on how general or specific certain rules or principles are, as well as how readily they carry over into changed historical contexts in other times and places.

The heart of Wheeler’s study involves four exegetical chapters, analysing in some detail Mark 10:17–31; Luke 12:22–34; 2 Corinthians 8:1–15; and James 5:1–6. In the case of the story of the rich young ruler, she notes that wealth appears primarily as an obstacle to properly responding to kingdom demands. When Jesus warns against storing up treasures on earth, the key point is ‘that what one pursues de facto is what one treasures, and in it reposes one’s trust and confidence’ (p. 71). The key selection from Paul emphasizes stewardship as a response to God’s grace to such an extent that it appears ‘almost to satirize the rhetoric of benefaction that he is thought to have appropriated’ (p. 80). And in James one reads not of ‘an effort to change the behaviour of the rich who are addressed, but the announcement of a sentence already passed’ (p. 97). Wheeler accepts that the rich James condemns are not Christians and that elsewhere well-to-do Christians do appear in the epistle, but she recognizes that Christians must assess their own holdings and behaviour to see if, in fact, they too closely approximate to those of the unbelievers condemned here.

Closing chapters briefly survey the other key passages in the NT, with a helpful table of texts studied (pp. 118–19). Wheeler finally identifies four key themes in the tradition antecedent to the NT (OT and apocrypha): wealth as an occasion for idolatry, as the fruit of injustice, as the blessing on the faithful, and as the reward of labour. The first two of these carry over into the NT, the third is almost entirely missing, and the fourth is considerably truncated and spiritualized. The four major themes Wheeler finds predominating in NT material correspond to the emphases of the four passages selected for detailed analysis: wealth as a stumbling-block, as a competing object of devotion, as a resource for human needs, and as a symptom of economic injustice. In the light of the difficulty of the hermeneutical task of moving from the first-century biblical world to contemporary societies, Wheeler concludes that the most helpful approach to appropriating these themes is by asking questions—‘about liberty, worship, justice and care’—questions that probe at personal, communal, ecclesial and societal dimensions about the function of material possessions in our lives and world today.

Given the scope and brevity of the book, it generally succeeds well in accomplishing its objective. There are occasional examples of exegetical over-interpretation (such as the abuse of the aorist at the bottom of p. 63) or under-interpretation (such as not noting the moral implications of the term ‘fool’ in Lk. 12:13–21, based on OT background, on p. 66). Given the percentage of the volume that is taken up with introductory methodological and ethical concerns more generally, one could have also hoped for a more nuanced conclusion about how Wheeler’s own method works itself out in contemporary application. It is not clear that all of that introductory discussion was necessary if at last we are simply to ask various probing questions without any more normative guidance than results from that process. The secondary literature interacted with is also fairly modest. A select bibliography confirms the sense the reader gets from the body of Wheeler’s narrative: that she has not dealt with previous studies of the NT on possessions more generally, a curious omission, to be sure. Rather, the works cited are either very general ethical discussions or analyses simply of individual NT authors or passages. On the other hand, one clearly senses an even-handed, inductive wrestling with the texts of Scripture themselves and a recognition of the complexity of applying them to our modern world. Given Wheeler’s concluding call for appropriation within contemporary Christian communities that share the eschatological and soteriological presuppositions of the passages surveyed and hold their members accountable for considerably counter-culture commitments, it might have been helpful to present a few such models of groups actually attempting this today, including perhaps the author’s own successes or failures at implementation. But these various caveats should not be construed as denying the considerable value of the work. Wheeler has clearly identified the key texts and the key issues, and no sympathetic reader can come away from his or her study without asking probing questions of his or her own stewardship of mammon.

The book edited by Wuthnow, Princeton University Professor of Social Sciences and author of numerous works on religion and materialism in contemporary life, is the outgrowth of two particular conferences on the study of American religion. The essays are ‘unified by the assumption that materialism is not fundamentally an economic problem but a cultural one—a spiritual issue’ (p. 7). They are intended for an interdisciplinary audience that includes policymakers, religious leaders, laity, and students of the social sciences. The studies are placed under two main headings: ‘The Culture of Materialism’ and ‘Toward a Critique of Materialism’.

After Wuthnow’s introduction, Wilfred McClay begins Part 1 with the lengthiest essay in the volume, presenting a decade-by-decade history of American trends on materialism since the 1950s. In broad strokes, the 1950s created the social man, the 1960s and 1970s initiated protests against him, and the 1980s and 1990s have bequeathed to us enduring legacies of both trends by a widespread compartmentalization of public and private life. The way forward will probably lie in small, cohesive communities rethinking the negative impact of materialism, rather than via widespread discussion in the public sphere with the reaffirmation of a civil religion. Neil Smelser next explores ‘Economic Rationality as a Religious System’, describing how classical and neo-classical economics go through three phases akin to those of religious world-views: an initially articulated utopia, tensions associated with such visions, and attempted resolutions of those tensions. Third, John Boli discusses the ‘Economic Absorption of the Sacred’, taking the parallels noted by Smelser one step further. Modern economics not only parallels religion; for all intents and purposes, it is the dominant religion of modern western society. The only way to combat this trend is to desacralize the entire culture. Not unlike McClay, Boli ends by noticing that perhaps ‘a socialism that also rejects the state by operating at the local level and explicitly rejecting the notion of a master project for sweeping social changes has some prospects of fundamentally reorientating contemporary culture’ (p. 115). The most readable of the essays in Part 1 is the last, in which Marsha Whitten surveys twelve major recent popular evangelical writers discussing work, the marketplace, and the nature of money and possessions. With occasional important exceptions, these treatments psychologize spiritual matters, privatize Christian faith and ethics, see largely the positive benefits of work, and call on Christians to accept and endorse the status quo. Whitten is aware that not all American evangelicals embrace political or economic conservatism, but notes that among the most well-known and influential popular writers this diversity goes largely unnoticed.

In the second half of this volume, Nicholas Wolterstorff leads off by refuting two tenets of Max Weber’s portrait of the interaction of economics and religion, namely that Christian ethical convictions have become irrelevant, both to our motivations and dispositions for engaging in economic activity in a capitalist system and for our appraisal of the social outcomes of those economic activities. Along the way, he points out the historically intriguing and little-known strand that dominated earlier periods of Christian thought, namely that the extremely impoverished person has the right to take from the person of plenty what he or she needs for sustenance. The importance of the tradition of almsgiving for the well-to-do is also helpfully rehabilitated. In the most poetic and rhapsodic of the essays presented here, Croatian theologian Miroslav Volf convincingly demonstrates how economic problems cannot be solved by economic means alone. Apart from spiritual, indeed Christian, commitments, all economic systems will breed injustice because, while consumerism may be a creation of capitalism, insatiability is endemic to human nature. Volf’s essay is also the only one in the book to give any significant attention to Scripture, here by repeatedly citing Ecclesiastes. Volf agrees with most of the popular writers Whitten surveyed, that a Christian perspective acknowledges the inherent value of work. But paradoxically this observation ought not to promote workaholism: ‘If work has intrinsic value, one will resist the pressure to produce frantically and instead take time to delight in work’ (p. 187). The weakest essay in Wuthnow’s collection is the next one, ‘Deep Ecology and Moral Community’ by Albert Bergesen. The premises of this article are that a complete equation of the value of humankind with that of all other species is both the next and proper development in the post-Reformation emphases on liberation and rights for all entities in the cosmos. Nothing of Christianity’s emphasis on the unique role of humanity as created in the image of God, nor anything remotely resembling a Christian world-view, appears in this chapter. In the most purely descriptive essay, Alan Wolfe concludes the body of this anthology with a taxonomy of seven ways social scientists use the term ‘moral’. Renowned University of Chicago historian Martin Marty adds a postscript reflecting on the inseparability of materialism and spirituality in American religion, as over against certain classic European trends to consistently pit one against the other.

Despite the broader title, there are numerous parts of this collection that trace distinctively American developments, though particularly in recent decades Britain, of all the European countries, most often affords the closest parallels. One could have hoped for a more distinctly Christian orientation in these studies (indeed, only Wolterstorff and Volf write from a perspective that explicitly incorporates Christian values), but the breadth of perspectives offered under the larger category of ‘spiritual dimensions’ does provide a needed synthesis of the spectrum of opinions in contemporary thought. Each of the essays reflects considerable depth and nuancing of argument, and several of them are not at all easy reading for one without a fairly detailed introduction to both sociology and economics. Still, all are worth the struggle. One might hope that these largely descriptive analyses of the current state of the West might lead to a subsequent set of more detailed discussions of possible ways forward. How Christians in an increasingly ruthless, capitalistic world can be true to biblical principles or economic behaviour and yet speak and act intelligibly in the public sphere is a question that cries out for thoughtful answers.