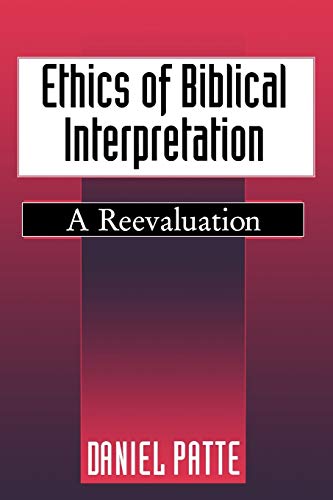 Ethics of Biblical Interpretation. A Reevaluation

This absorbing and disconcerting book is to be highly recommended for evangelicals who are thinking through the issues of how academic biblical interpretation relates to ‘popular’ or ‘ordinary’ Bible reading.

It is absorbing because Patte’s central thesis is a powerful one: critical biblical scholarship has failed on several counts, primarily ethical ones. It rejects the voices from the margin of the academy, writing them off as advocacy scholarship (e.g. feminist liberationist) in comparison with truly critical (detached) exegesis. It thus rejoices in a position of power from which it sits in judgement on other approaches.

Patte recounts his own pilgrimage through various stages of becoming aware of this problem. At first he tried to co-opt the voices of feminist or African interpreters, for example and present their readings as equally valid. But this is not a solution, because it is still he, the ‘white Eurocentric male’ (as he likes to call himself throughout this book), who is determining which readings shall be considered. Ironically, such a solution would involve denying his own identity and thus fails ethically to be a true activity on his own part, as well as not satisfying those he was trying to co-opt. The problem lies in the fact that ‘co-opting’ is still an action from a position of power.

Patte’s revised solution is therefore to re-envision critical exegesis through a process of reflection on why he (or anyone) pursues it as a career in the first place: it was intended to break the stranglehold of obscurantist readings which set up dogmatic interpretative systems which serve to control, oppress and dehumanize. The irony here is that the academy functions in just such a way itself. The solution: to respect the ‘multi-dimensionality’ of the biblical text; to accept that different readings all find points of resonance with ‘different, coherent meaning-producing dimensions’ of the text (and he illustrates this claim convincingly with reference to different interpretations of the sermon on the Mount). This in turn leads him to envision the task of critical exegesis as that of bringing to critical understanding an ordinary reading (whether it be that of the scholars themselves or of some other, equally interested, group). The absence of a ‘The’ in the book’s title here reflects the idea that each approach is an advocacy approach with ethical ramifications.

What makes this thesis so disconcerting is that Patte cites ‘fundamentalist evangelicalism’ as one of the main obscurantist traditions he is opposing. He offers a studied appraisal of the merits of evangelical reading coupled with a rare critical admission that anti-evangelicalism is just as much an oppressive controlling force in exegesis as any of the worst excesses of fundamentalism.

I find this overall thesis compelling, and distinctly valuable for relating the task of critical exegesis to the ‘ordinary’ readings of, among others, the ‘evangelical bible study groups’ which Patte often refers to sympathetically. The outstanding question his approach will raise is how far one goes with accepting the various readings as equally valid: here he relies on saying that different critical methods lend themselves to locating different meaning-producing dimensions of the text, but that they do so with considerable rigour. Some readings, therefore, are still ungrounded, and I think he successfully holds the flood-doors shut against admitting any and every ‘reading’.

The contents page fails to locate half the chapters correctly. The style is heavy going, although the autobiographical approach speeds the reader on through lengthy discussion of ‘androcritical multidimensional exegetical practice’ and lends itself to a refreshing dry wit as Patte reflects on problems within the academy. A stimulating read, especially for those of us on the evangelical side of the equation.