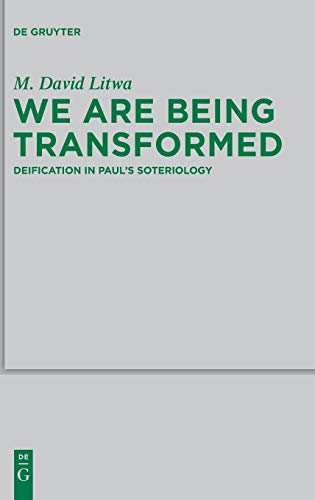 We Are Being Transformed: Deification in Paul’s Soteriology

In the introduction, Litwa overviews ancient forms of deification, a history of research on the subject, and a methodology for his own study. On the latter, he points out that he is not attempting to argue for a genetic influence of ancient concepts of deification on Paul. Rather, he argues that Paul was influenced on deeper, structural, and conceptual levels so that his soteriology can be fruitfully analysed in terms of ancient deification. Litwa defines deification in stronger terms than mere ‘likeness’ to deity. It is a sharing in a/the divine identity, i.e., sharing in those distinctive qualities which make (a) God (a) God (p. 32).

The first part of the study surveys deification in Paul’s context. Chapter 1 offers a definition of divinity in the ancient world. He argues that Jews, Greeks, and Paul himself all agreed that the concepts of power and immortality were central (if not the central) traits of the divine. Chapter 2 surveys Graeco-Roman concepts of deification, particularly specific examples of ruler cults whereby rulers are assimilated to specific deities. Chapter 3 offers an account of Jewish roots of deification, arguing that Paul’s Bible contained the ‘images and stories’ which would later enable Jews to imagine a deification soteriology (p. 115).

The second part of the monograph makes the argument for a Pauline form of assimilation to the divine being, namely, Christ. Chapter 4 focusses on Paul’s concept of the ‘pneumatic body’ in 1 Cor 15:44. Reading this particularly against a Stoic background, he argues that Paul understands the glorification of Christians to involve a conformity to the body of Christ and hence a share in his attributes of incorruptibility and immortality, i.e., deification. Chapters 5–7 seek to underscore the idea that what we see in Paul (particularly in 1 Cor 15), namely, partaking in Christ’s celestial immortality (ch. 5), sharing in his divine power (ch. 6), and being assimilated to his moral character (ch. 7), together constitute a form of deification. When these central soteriological aspects are read against ancient concepts of deification, it becomes clear, Litwa argues, that Paul’s soteriology is a form of deification.

Part three deals with potential objections to Litwa’s argument, namely, that the concepts of monotheism and divine transcendence rule out the idea that humans can participate in divinity. Neither of these ideas, Litwa argues, are fatal objections. So chapter 8 argues that the Jewish concept of monotheism did not exclude human assimilation to the divine identity with respect to the sharing of divine characteristics such as power and immortality. Similarly, chapter 9 argues that Paul’s understanding of deification is not absolute such that it negates God’s uniqueness.

In the conclusion of the book, Litwa offers what he sees as the benefits of his study. Fundamentally, to understand Paul’s soteriology as a form of deification unlocks the heart of his soteriology in connecting the central ideas of transformation, divine reality, and union.

This is an important and useful study. It very carefully situates Paul’s soteriology in its ancient context and shows how it unquestionably has parallels in the wider Graeco-Roman world. As such, it advances our understanding of the background against which we should understand the apostle’s theology. Nevertheless, two questions in particular stood out for me. First is the fundamental question of terminology. Litwa is very careful to point out that deification for Paul does not involve a ‘fusion’ of the human being and God. They share an identity but remain distinct. This is careful nuancing, but one wonders, then, that if Paul’s form of deification is unique in the ancient world, how useful it is to employ deification as a summary category of his soteriology. Litwa has demonstrated that Paul’s soteriology shared certain characteristics with other ancient soteriologies, but I don’t think that is enough to establish that his overall soteriology should be fundamentally characterised as ‘deification’.

Second, although Litwa suggests his model preserves the distinction between humans and God, nevertheless, at points this distinction does seem to be elided. In 1 Cor 15, Litwa maintains that Paul’s description of Christ means that he ‘far outstrips the nature of a human being’ and has made the transition from a human to a divine being (p. 164). Likewise, ‘deified humans transcend corruptible, frail, mortal human nature’ (p. 298). Here Litwa equates humanity with frailty, corruptibility, and mortality. But this misses the force of Paul’s argument in 1 Cor 15: Christ does not destroy or even transpose our humanity into deity, but he redeems, transforms, and fulfils it (1 Cor 15:20–28; Rom 8:29). If deification is understood to entail the transcending of human nature, then it distorts Paul’s soteriology at a vital point.