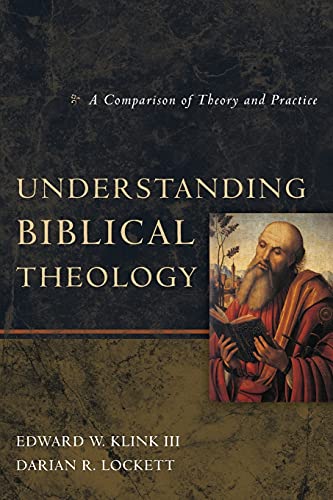 Understanding Biblical Theology: A Comparison of Theory and Practice

The authors are both NT professors at Talbot School of Theology, Biola University. Both completed their PhDs at St. Andrews in Scotland. Both found inspiration for this book in the Scripture and Theology seminar at St. Andrews directed by Christopher Seitz when they were doctoral students. “It was in that seminar room that biblical theology became both the problem and the promise of our academic and ministerial work” (p. 9).

The book tackles the problem. The problem is that biblical theology (hereafter BT, except in quotes) is a much talked-about enterprise. But people define it in all sorts of ways. The authors are emphatic that their book “is not an answer to the problem of defining biblical theology” (p. 25; cf. p. 183). Yet they do attempt to sketch a framework for a definition “by describing various theories and practices of contemporary biblical theology” (p. 20). Or again: the book “is an attempt to draw attention to some of the central issues . . . along with a practical consideration of some of the more visible thinkers working in this area” (p. 183).

What we find in the book, then, is a taxonomy of approaches to BT that the authors take to be prominent in recent years. They isolate five types: (1) historical description, (2) history of redemption, (3) worldview-story, (4) canonical, and (5) theological construction.

To describe type 1, the authors unpack the definition of BT set forth by Krister Stendahl, who thought it should “affirm the exegetical or descriptive nature” of BT while at the same time denying it any theological or normative status (p. 31). They then move from Stendahl the theoretician to James Barr the practitioner. While they appreciate various facets of Barr’s scholarship, as far as BT they emphasize the limitations of Barr’s primarily negative, reductionist, and too often naturalistic methodology.

Type 2 features D. A. Carson, Brian Rosner, and others as theoreticians. This group views BT as discerning the historical progression of God’s redemptive work through inductive analysis of biblical themes like the kingdom of God or covenant in their biblical and historical unfolding. Geerhardus Vos and Graeme Goldsworthy are also placed in this school of thought, which is further divided (somewhat tongue-in-cheek) into the “Dallas school” associated with Dallas Seminary and the “Chicago school,” so-named for D. A. Carson’s prominence in it and his location at Trinity Evangelical Divinity School near Chicago. There is also the “Philadelphia school” associated with figures like Geerhardus Vos of Old Princeton and more recently Richard Gaffin and John Murray at Westminster Seminary. The assessment of these contrasting yet similar trajectories is mainly positive, with the main strength of BT in this mode “its exegetically driven and historically sensitive reading of Scripture” (p. 74).

After discussion of type 2 in theory, a chapter is devoted to D. A. Carson’s works on and about BT. The assessment is more positive than not, though the authors suggest that Carson “seems to underplay the abstracting character of history alongside that of reason and philosophy. History is not as neutral as Carson’s implicit construction suggests” (p. 89). The implicit charge of historiographical naiveté on Carson’s part is hardly warranted given the hermeneutical sophistication that characterizes the Carson corpus.

Type 3 features N. T. Wright and “biblical theology as worldview-story.” His approach is accorded high marks for balancing history and theology, but Klink and Lockett are uncertain to what extent Wright’s series Christian Origins and the Question of God (three volumes complete thus far) “actually achieves this difficult balance” (p. 121). The question is raised whether Wright’s dependence on historical reconstruction and seeming “methodological naturalism” (cf. C. Stephen Evans) may work against “a variety of the church’s traditional theological positions” (p. 122).

Type 4 is presented as a step away from historical emphasis per se and toward the theological, “with the foundational axis being the canon” (p. 125). Brevard Childs and his program come to the fore. Klink and Lockett peer behind Childs’s stress on canon to recognize that his “attempt to relate exegesis and dogmatics is probably his greatest contribution” (p. 152). Criticisms of Childs center on ambiguity about the meaning of “canon,” on whether his approach is as amenable to “the church” (which one?) as he affirms, and whether he has succeeded at integrating theological reading and the results of historical criticism. Does he end up being, in Dale Brueggeman’s phrase, a postcritical biblicist—“a strange mixture of some of the tendencies of ‘conservatism’ alongside the standard, more ‘liberal’ appropriation of historical criticism” (p. 153)?

Lockett and Klink relate type 5 of BT to today’s popular “theological interpretation of Scripture.” This type seeks to move from burying the Bible in its ancient setting, determining instead to view it as “contemporary Christian Scripture” (p. 157). “The true home of biblical theology” in this view is “in the worshiping context of the church” (p. 158), not the academy with its historicist and often naturalistic hermeneutics. Francis Watson is the featured proponent of type 5. He is lauded for his theological interest and openness, but the jury is out regarding the future of his simultaneous appeal to systematic theology, BT, and NT scholarship, to say nothing of “the domain of the church, which figures so prominently in his hermeneutic” (p. 180). His breadth leaves him open to criticisms from purists in each of the domains from which he draws.

The book is helpful as a means of ordering and comparing related yet contrasting synthetic readings of the Bible (see especially the chart on pp. 186–89). Not all names found in the footnotes appear in the author index. The absence of discussion of the German contribution (apart from Gabler to kick things off, pp. 14–17, and occasional nods to Barth) depicts accurately how many in the English-speaking world understand things. But the English-language discussion is heavily indebted to patterns, rules, and publications emanating from the Vaterland of contemporary biblical studies. Taxonomy of BT that pays too little attention to foundations risks being epiphenomenal, grasping mainly surface features of what it is looking at. Still, as a point of entry into a wide-ranging and often contrasting series of approaches proceeding (confusingly) under the catch-all banner of “biblical theology,” this book will prove useful. Its greatest strength may be its concise and generally accurate summaries (and critique) of some of today’s biggest names in their fields. A nagging question is whether by refusing to settle on a definition of BT, and thus opening the gates so wide, the book herds together much that is in the end disparate.