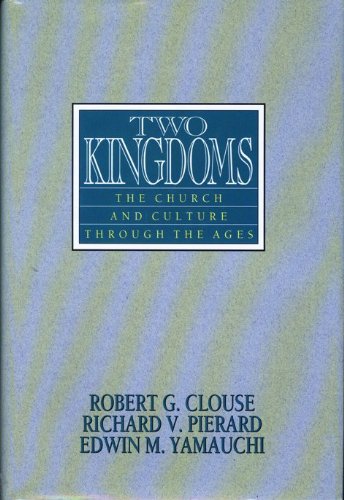 Two Kingdoms: The Church and Culture Through the Ages

I have long felt that a reviewer of a book should judge a volume not by its cover, as shoppers often do, but by the intent and purpose of the author or, in this case, the authors. We can discover an author’s purpose—at least, of this kind of book—in two ways: first, we check the preface, and then we try to trace the development. Then, as I understand the duty of a reviewer, we ask how well the author accomplished his or her purpose. In my case, I examined this book as a reader and as a teacher. I wanted to know what readers the authors had in mind as they wrote this volume. And I asked, ‘Would I use this book in my classes?’

There are a lot of books out there that purport to tell the story of Christianity’s development over the centuries. The authors of Two Kingdoms acknowledge that it is impossible ‘to mention every person, idea, and movement’ in the history of Christianity. So they opted to ‘focus on some neglected aspects’ of Christianity. They felt that other surveys had neglected the involvement of Protestant evangelicals; and that Christian doctrine, ecclesiastical controversies and denominations had received ample attention. They decided to concentrate on the expansion of Christianity outside the Anglo-American areas.

The authors are three rather well-known American evangelicals who have been active in the renewal of evangelical scholarship during the last three decades, especially through the Conference on Faith and History. They are all experienced teachers in the undergraduate university classroom. These facts, I think, help to explain the substance of Two Kingdoms.

While the authors wave few flags for super-naturalism, they also make no effort to hide their evangelical commitments. ‘The survival and growth of the church’, they write, ‘is a remarkable tribute to the power of God in the world’ (p. 14). But they tend to treat theology not by tracing revealed ideas so much as by introducing theologians.

With this approach to the Christian story, the book’s subtitle—‘the church and culture through the ages’—proves to be a bit misleading. ‘Culture’ is a stylish term currently but in this case it promises more than it delivers. The church’s relationship to culture proves to be mostly factual material narrating a host of ways that the Christian story is intertwined with world events, primarily in the expansion of Christianity.

This story of Christianity’s expansion into a variety of cultures is the outstanding strength of the book. The authors’ knowledge of so-called secular history is evident on virtually every page. Themelios readers familiar with other historians will understand a comparison: this volume is in the Latourette tradition rather than the Bainton tradition. In their intentional neglect of theology, the authors provide little insight into the ways that Christian truth adapted to pagan ideals, which I consider the most profound level of ‘church and culture’.

The design of the book is also revealing. We can detect it, as we should, in the table of contents. In this case, we find three major parts: Early and Medieval Church, ad 1–1450; The Reformed and Revived Church, 1300–1789; and The Advancing and Global Church, 1789–Present. As a teacher of Christian history I found this development of the Christian story intriguing. Why the strange blend of general and specific dates? I never found a clear answer to that question but the divisions suggest, I think, that Christianity is treated against the backdrop of first Western and then world history. Otherwise, why tuck the theologically significant Protestant Reformation within the rise of modern European states? And why mark the global church period by the French Revolution rather than some distinctively Christian event such as William Carey’s trip to Asia or the Puritan settlements in the New World?

To help the student with the problem of sequence and identity, visuals are scattered throughout the volume. The time line charts—in every chapter—are especially helpful for the novice in Christian history.

So, would I recommend this book to the readers of Themelios? To all? No. To some? Yes. Let me explain. As most of us know, history has been conspicuously absent from many degree programmes in recent decades. So the general reader will find this book tough going. Too many significant terms go undefined; too many historic giants go unidentified—for the general reader.

This is my biggest question: What is the assumed knowledge level of the reader? If the book is intended for the general reader, then it assumes knowledge of too many terms that pass quickly before the reader without adequate identity or meaning. And, given our entertainment-oriented public today, can we introduce our readers to Christian history without identifying the church in understandable theological terms?

But this is to question the book the authors did not write and did not intend to write. That is why my answer to the recommendation question is also a ‘yes’. I recommend the book, but especially to those who have had a course in Western Civilization or World History. The authors assume a familiarity with world history, so much so, in fact, that I suspect the book is intended for advanced undergraduate university students. And readers who want to discover how Christianity relates to world history will find this a detailed and straightforward account of the story. Judged in the light of that purpose, the book, I think, succeeds admirably.