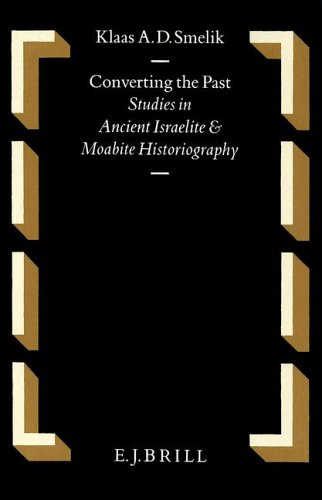 Converting the Past: Studies in Ancient Israelite and Moabite Historiography (Oudtestamentische Studiën 28)

Smelik has collected several studies on different passages from the Hebrew Bible and one on the Moabite stone. These are introduced with a chapter on biblical historiography. Every chapter had been preceded by one or two essays by the author, originally published in Dutch. Overall the work’s strength lies in its literary and thematic analysis of the biblical texts under consideration. Its attempt to relate the results of these studies to history creates some need for caution.

Thus Smelik argues that the Hebrew Bible, like Ancient Near Eastern historiography, is unreliable because apparent contradictions can be found between texts themselves and between texts and the archaeological evidence. The solution for the biblical historian is to extract from a text its ‘hidden meaning’ or ideological truth and to apply that to a later period in which it best fits. However, in practice this method produces ambiguous results at best. For example, in Smelik’s application of the Sihon and Og story to the sixth century, he identifies an ideology of Israelite antipathy toward Transjordanian states. Such a perspective could be applied with equal force to known conditions in Israel during the centuries before or after the sixth. Even the world of the ninth-century Moabite stele would suit. Smelik’s argument that 1 Samuel 13:1 is correct when it states that Saul ruled two years runs counter to all the other biblical evidence, as well as Josephus and those versions which address the issue.

In his discussion of the ark narrative, Smelik helpfully explores some of the main theological themes of the relevant texts: God’s house and property are not divinely guaranteed, David will replace Saul, Saul and his successors are rejected. The occurrence of these themes throughout Samuel helps to demonstrate Smelik’s thesis that the ark narrative is not a literary unit separate from the rest of Samuel. He is less successful in refuting an early date for Samuel, something to which he devotes little space anyway. The attempt to address the relationship of the archaeology of Shiloh to Jeremiah 7 makes no reference to the recent excavations of I. Finkelstein.

The chapter on the Moabite Mesha inscription is again helpful in distinguishing literary aspects, especially regarding the main speakers and their speeches and the syntactical distinctives in different sections of the text. A large part of the chapter is devoted to the identification of the sites of Jahaz and Kir-hareseth. Jahaz is identified with Khirbet Libb between modern Madaba and Dhibon. Smelik’s proposal that Kir-hareseth is a derogatory name for Dibon is interesting but it is not clear that any of the arguments he presents substantiate his conclusion that 2 Kings 3 has no relationship to history. Here he relies on the arguments of others for his conclusion about the historicity of the text.

Smelik’s study of the dual record of Hezekiah and Sennacherib in Isaiah 36–37 and in 2 Kings 18–19 provides a good example of intertextuality in the book of Isaiah. The study persuasively argues that these texts relate thematically and linguistically to other texts in Isaiah 1–39 and in chapters 40–66. The results have important implications for literary studies and canonical criticism. The same cannot be said with respect to historical criticism. Demonstrating an interdependency does not provide conclusions regarding the prior dependency of one text on the other or on the dating of various texts. Nor does it provide much that can be concluded about which came first, the text in Isaiah or the one in Kings. It is true that Smelik calls into question assumptions about the necessary priority of the Kings text. However, he does not thereby demonstrate that the text was incorporated into Kings from the book of Isaiah, or that it is largely unhistorical, or that it must have been written after 600 BC.

Smelik’s final chapter compares the two portrayals of Manasseh in Kings and Chronicles. The former views Manasseh as the most wicked of kings but must then explain why his reign was the longest of any king. It does this by interweaving the sins of the people which predate and postdate Manasseh and thus uses their transgressions as the ultimate basis for the destruction of the kingdom, which even the reforms of Josiah could not prevent. On the other hand, the Chronicler does not portray Manasseh as the most wicked but actually ascribes more transgressions to Ahaz. Following Williamson, Smelik suggests that the Chronicler portrays Manasseh as a model of the nation’s sojourn in exile. For this reason Manasseh is led off to Babylon rather than Nineveh. For this reason he repents and is returned to Jerusalem. Again, much of this analysis is useful and important material. What is not clear is that it can make any statement about the historicity of the events which it relates. Smelik’s work is a model of the virtues and problems of recent literary approaches to what remains traditional historical criticism. The literary analysis is often the best available, insisting upon the importance of the whole text. However, literary analysis by itself cannot critique historical worth.