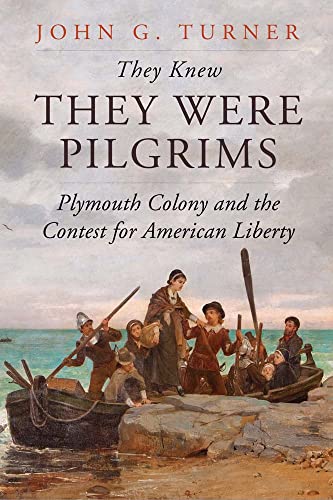 They Knew They Were Pilgrims: Plymouth Colony and the Contest for American Liberty

In American folklore, Plymouth Rock emerges as a monument to freedom, the place where a band of English Separatists (later referred to as “the Pilgrims”) made landfall in search of a new way forward. From its physical appearance, the rock itself does not conjure such grandiose notions. Expecting an enormous crag jutting from the eastern Massachusetts coast, visitors happen, instead, upon a relatively small boulder, buried in the Plymouth Harbor beach, surrounded by a tall, man-made portico. What is more, the boulder almost certainly does not mark the geographical location at which these settlers first disembarked. Much of Plymouth’s recorded history amounts to tall tales. Perhaps more consequentially, many such accounts offer skewed representations of the Pilgrim settlers as the heroic progenitors of American democracy, true religious liberty, and congenial relations between diverse peoples.

In They Knew They Were Pilgrims, John Turner endeavors to set the record straight. Turner’s account is three parts history and one part a statement. While the Plymouth Colony was not the bastion of public warmth, democracy, and religious liberty many modern accounts describe it as, it also was not, as others argue, altogether unimportant in the development of such treasured American ideals. Turner’s account provides a sweeping historical narrative, charting the Separatists’ course from dissidence in England, a retreat to Amsterdam at Leiden, the famed trans-Atlantic journey aboard the Mayflower, and the group’s efforts to build and sustain a New World colony amid constant conflict. At the heart of the Pilgrims’ plight was a contest for, and a proper definition of, “liberty.”

The thrust of Turner’s work accords with typical accounts: Plymouth Colony was a product of Protestant impulses with separatist flair. The Americas offered both an opportunity for a new form of government, religious practice unconstrained by Catholic oversight, and the allure of new business ventures and economic prosperity.

According to Turner, and contra popular narratives perpetuated in post-Revolutionary America by figures such as John Quincy Adams and Daniel Webster, the Pilgrims’ first attempt at politically-defined cooperation did not amount to a “model” for the American democratic republic that emerged in the next century. Rather, the Mayflower Compact served only as a basic guiding document that, while promoting consent, participation, and a body politic, ultimately threatened those who wished to restrict the colonies’ social and religious liberty.

One of Turner’s unique contributions in the volume reflects the aforementioned tension as he highlights, at length, the rank hypocrisy inherent within the first English colonists’ mission. In Turner’s account, the hypocrisy is most evident in the Separatists’ declaration of liberty for themselves yet the denial of rights for dissident religious groups such as the Baptists and the Quakers, indigenous Native American peoples, and, in some cases, enslaved African Americans after them. Turner offers a substantial reflection on the circumstances surrounding King Philip’s War. This conflict highlights both the complexity of the settlers’ situation and the insidious motivations underlying much of the English conquest. Turner’s historical reading is one showcasing “warts and all.” While he stops short of making sustained moral pronouncements, it is not difficult for readers to fill in the ethical lines: the Pilgrims ought not to be naively lauded.

Still, as Turner’s work also demonstrates, it is proper to give credit wherever it is due. In recent accounts of American religious history, the Pilgrims’ influence on religious developments among the English colonies has been diminished if not rejected outright. Most notable among the denunciations is eminent New England Puritan scholar Perry Miller. While Miller credits the spread of congregationalism among Puritans in the New World to ministerial philosophies carried over from England by William Ames and others, Turner suggests Miller has “underestimated the Pilgrims” in his conclusions (p. 143). Citing personal visits to new Puritan settlements by Plymouth emissary Samuel Fuller, cordial relationships between Massachusetts Bay governor John Winthrop and Plymouth governor William Bradford, and practices among colonial Puritans that imbibed Plymouth’s congregational distinctives, Turner writes, “the evidence for Plymouth’s influence is strong” (p. 143). Turner’s point could be helped along by further attention to additional source work in this regard, yet that assignment should rightly be reserved for others to complete. Though the Plymouth group did not have the sort of notable, thoroughgoing influence they once hoped for, the entailments of the new course they charted can still be observed and appreciated.

The Pilgrim Separatists’ story is complex and meandering, despite most popularized accounts. So it is with all stories set in the human past; historical work often defies equations and formulas. In They Knew They Were Pilgrims, John Turner expertly navigates nearly a century’s worth of Pilgrim activity, drawing to the fore significant and timely questions concerning the perpetual contest for liberty. While contemporary moral applications are not the express goal of historical works such as Turner’s, the project raises questions for present-day advocates for political and religious freedom everywhere: if liberty for some, should there not be liberty for all? What are prudent boundaries? How are we to wisely ascertain the fundamental human rights for all image-bearers? Citing Hebrews 11, Bradford once wrote of the first colonists, “They knew they were pilgrims, and looked not much on (their trouble), but lifted up their eyes to the heavens, their dearest country, and quieted their spirits.” So, we, too, seeking to answer the profound questions of our day, keep our eyes heavenward, from whence our help does come, and boldly proclaim and advocate for that true liberty that honors God and uplifts our fellow man.