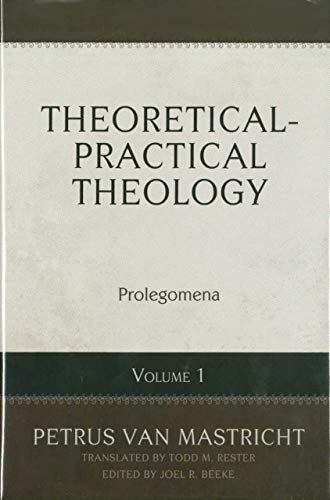 Jonathan Edwards once described the system of doctrine produced by Dutch scholastic Petrus Van Mastricht as “much better than Turretin or any other book in the world, excepting the Bible, in my opinion.” Theoretical-Practical Theology (TPT), published in 1699 in a high point for Reformed orthodoxy, is now for the first time available in a reliable and fluid English translation from the Latin. This new edition represents a landmark in English-speaking historical theology, possibly even rivaling the translation of Bavinck’s Reformed Dogmatics.

While Turretin defined theology as theoretical and excelled at elenctics (i.e., polemics), Brakel shone in devotional or practical theology. However, Richard Muller in his endorsement notes that “Mastricht’s work represents the full achievement of the Reformed orthodox theological program of developing an exegetical, doctrinal, elenctic or polemical, and practical approach to Christian doctrine” (emphasis added). Hence, as indicated by the title of this work, theology is for Mastricht “theoretical-practical.” He writes, “For just as practice without theory is nothing, so theory without practice is empty and vain…. The Savior joins them together: ‘If you know these things, you will be blessed if you do them’” (p. 70). Single all his life, Mastricht’s life was remarkably well-rounded spiritually and intellectually, evidenced not least by the surprising fact that he was even once a professor of Hebrew and Old Testament. Mastricht brings to bear a unique mixture of a scholastic approach to theology and an emphasis on preaching that permeated his life and writing. This yields a work that is exceptionally valuable to the pastor and preacher: not only does it teach a classical doctrine of the Trinity, for example, but the exegetical parts of each section expound the Scriptural bases with the detail and rigour of a Hebrew expert (no proof-texting is to be found here), and the distinctive practical sections even provide specific points of application from these classical doctrines that readers will surely not encounter elsewhere. TPT was always meant to comprise theology in service of preaching. To that end, this first volume includes a curious treatise by Mastricht on “The Best Method for Preaching.”

Mastricht conceded that the print of the Latin original was vanishingly small but reassured readers it was to save them money and space by condensing three volumes into two. Besides, “I thought this trouble easily compensated: the young have sharp eyes, and the old have glasses” (p. 43)! By contrast, this modern edition is much more legible than the original but, for good or ill, will eventually rack up no fewer than seven volumes. The entry under discussion includes a brief but excellent biographical sketch, the preaching treatise, and the sermon from his funeral before proceeding to the final part of the book, which is book 1 of TPT. The first and last section will likely be of far more interest than the middle two. Book 1 then comprises the prolegomena, or how the study should be carried out, which in turn is neatly organized into (1) the nature of theology, (2) its principle or foundation (Scripture), and (3) its distribution into parts (its structure). While it may be more realistic for some to skip straight to the doctrine of God in volume 2, a survey of some highlights will hopefully showcase the value even of Mastricht’s prolegomena, including for apologetics.

Mastricht starts by turning to 1 Timothy 6:2–3 to shed exegetical light on the nature of theology. In this passage, Mastricht notes, Paul exhorts Timothy to uphold and teach the entirety of sound Christian theology and to do so “according to godliness.” He indicates the significance of the first point in this way: unlike all other sciences, including even natural theology—which he unambiguously affirms—doctrine cannot be learned but can only be taught. It cannot be acquired or individually mastered but can only be passed on or transferred, and only then from God himself. Meanwhile, Timothy’s teaching of this true theology must promote piety, specifically “rightly worshipping God … which is elsewhere expressed synonymously as living for God through Jesus Christ (Rom. 6:11) for which reason theology is called ‘the word of life’ (Acts 5:20)” (p. 66). These verses, including the opening 1 Timothy 6:2–3, are among Mastricht’s favorites to which he frequently returns.

Most of the other central insights of Mastricht in this volume are found in the second section on the foundation for theology, and thus in his doctrine of Scripture, given that the latter is theology’s only source or norm. For example, copious ink has recently been spilled on the question of an allegorical sense. Mastricht is particularly concerned about the idea that “the words of Scripture [might] signify whatever they can signify, from which also a manifold sense usually results.” In contrast, there is “only one sense, and that the literal, namely, that which the writer himself intends by his words” (p. 169). Yet he tempers these claims by pointing out that this single sense of authorial intent can also be a composite of the literal and the figural. Thus, a Christological sense in many Psalms, which may not have been the human authorial intent, could still be legitimate and even be labelled “literal” if it was intended by the divine author of the Holy Spirit. Moreover, this single sense does not preclude manifold applications or uses of that single sense of Scripture. Indeed, that is precisely what we see in much NT use of the OT, with Mastricht referencing 1 Corinthians 9–10 and Galatians 4. However, Mastricht’s argument for insisting on a “single sense” is not entirely persuasive, since his claim, “That which does not signify [only] one thing surely signifies nothing,” seems unjustified (p. 169). Regardless, his position is more than sufficiently nuanced to secure the classical and unashamedly theological interpretation of Scripture and Christological and Trinitarian readings of Scripture to come in Volume 2.

Also illuminating are Mastricht’s defenses of the Reformed doctrines of Scriptural clarity and sufficiency; his responses demonstrate detailed knowledge of Jewish, Muslim, and Roman Catholic traditions. In the face of Catholic attacks on Scripture’s perfection for “faith and life,” he repeatedly comes back to the limitedness of the Reformed claim. Here it is everything necessary for salvation—alternatively, “the necessary articles of faith”— for which Scripture is sufficient and perfectly equipped.

With the nature and foundation of theology outlined, all that is left in the final portion is to delineate its structure. Mastricht broke with tradition and with his contemporaries by front-ending the doctrine of faith. Instead of putting it in a much later section of the dogmatics in the doctrine of salvation (ordo salutis), he moved it right after the prolegomena and even before the doctrine of God. Thus, in the context of Cartesian idolatry of reason, he emphasized the central importance of faith for the rational study of God to bear any fruit. When a theologian of Mastricht’s stature devotes so much thought and attention to faith in a sceptical context, we ought to take note of his rich and compendious definition: “Saving faith is nothing other than an act of the whole rational soul, by which it receives God as its highest end, and Christ as its only Mediator, to this end, that we may be united with him, and so united obtain communion in all his benefits” (xlvii–xlviii). Therefore, even Mastricht’s structure is Christ-centered: Christ’s salvation and mediation, and indeed our reception of it, is a means to the end of union with Christ, from which flows our joyful communion with him.

Mastricht’s remarkable prescience partially stems from his self-consciously unique attempt to show the relevance of Christianity in a skeptical world: “We [Reformed] have been rather prolix against the pagans, because fewer systematicians are used to arguing with them” (p. 137). Mastricht was at the forefront of responding to the new philosophies of his day; one of his most popular works was a response to Descartes entitled “The Gangrene of Cartesian Novelties.” Accordingly, readers will find that he knows more than a thing or two about defending the faith. His recommendations include demonstrating to the skeptic the general reliability and truth of Scripture before turning to questions of its divine inspiration. In turn, one of the best strategies for establishing the Bible’s veracity is to ask the inquirer why they currently accept the books they do and then show that the Bible more than satisfies these criteria. He advocates the use of deduction (reasons and arguments) and induction (evidence); we might say he mixes classical and evidential approaches. Christian advocates of “circular reasoning” may be challenged to find this Reformed scholastic firmly rejecting the idea: “These testimonies to Scripture must not be presented here as divine, so that we might not argue in a circular way, but rather as human, although they are altogether true, based on what we presuppose from the preceding paragraphs” (p. 135).

Yet this is not to say that Scripture is being held to a human standard or that philosophical reason serves as the foundational principle for theology. No, Scripture, as divine speech, is self-authenticating and thus the only principle for theology proper. Neither has Mastricht intellectualized faith. Readers will frequently find their wills challenged or their hearts warmed by the practical parts of each section. Mastricht’s applications range from the bodily positions most conducive for prayer (noting that Scripture includes prostration, walking around, or with lifted eyes) to the love we should have towards Scripture: “This love in the divine Word consists in an affection toward the Scripture, an affection so inclined that we honor Scripture as we would God speaking to us with his own mouth … as if we had God speaking such things in our presence (1 Thess. 2:23)” (p. 185).

How do we reconcile this high view of reason, argumentation, and evidence in apologetics, with a theology that is also entirely exegetical, devotional, practical, and Christ-centred? Mastricht’s whole point in Theoretical-Practical Theology is that theology is a multi-faceted, fully orbed, and holistic “art,” in which the devotional and practical is never in conflict with the polemical. Neither is the Scriptural and exegetical in tension with the dogmatic and systematic: they reinforce and feed into one another. So Mastricht’s TPT entreats seminarians and ministers to devour Scripture, parse those Hebrew and Greek verbs, provide historical evidence and philosophical arguments, mark up outlines, put doctrines together systematically, preach your hearts out, make logical syllogisms, enjoy living for God through Christ in prayer, and convincingly answer every skeptical objection. Because theology is the art of living for God through Christ, and exegetical, dogmatic, elenctic, and practical elements all find their place in that most sacred art.