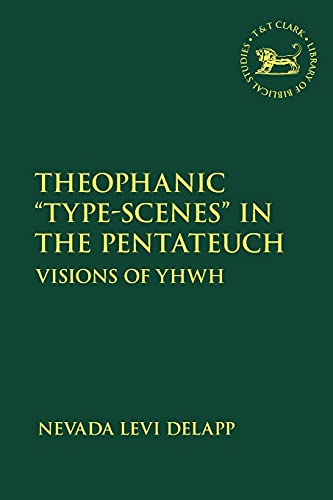 Theophanic “Type-Scenes” in the Pentateuch: Visions of YHWH

The Pentateuch is regularly punctuated by manifestations of God. From the enigmatic figures who approach Abraham in Genesis 18 to the fiery cloud that blazes atop Mt. Sinai, divine theophanies feature prominently. Yet, many questions remain. Why does God sometimes appear as a human figure and at other times as inapproachable glory? What correlation is there between different types of theophany, if any? How do these appearances contribute to the theology of the Torah? These are important questions. Nevada Levi DeLapp provides a nuanced and comprehensive response. The result is a compelling portrait of how divine theophanies function in the text and theology of the Pentateuch.

The opening chapter poses a key question: what exactly is a biblical theophany? Although a sighting of God is essential (cf. p. 11), his appearances remain enigmatic. Narrative gaps abound. YHWH visibly appears, yet readers gain no detailed description. DeLapp suggests this is exactly the point: “The seen YHWH cannot be re-seen through narrative description…. It is as if the final form has hedged YHWH about to keep prying eyes from seeing to their own destruction” (p. 3). Nevertheless, DeLapp argues that theophanies, as textual events, display “type-scene” similarities. Moreover, with at least three distinct type-scenes evident, the book explores the effect of reading the Pentateuchal theophanies synchronically in their narrative order (p. 10).

Accordingly, chapters move systematically through the Torah. In chapter 2, DeLapp identifies a Genesis theophanic type-scene composed of three elements: (1) a setting of threat and human doubt; (2) YHWH’s visible appearance; and (3) divinely restated promise (p. 16). Such theophanies occur at pivotal moments. When divine promises are seemingly jeopardized, YHWH appears to assuage doubt and restate his intentions—as, for example, with Isaac in Genesis 26:1–6. DeLapp concludes, “In a sense the Genesis stories present a future-focused God, a God intent on an eschaton where Abraham’s numerous progeny will flourish in the land” (p. 42).

The Exodus type-scene is markedly different. Theophanies typically include: (1) the appearance of YHWH’s כָּבוֹד (“glory”), (2) a communal setting, and (3) divine action that constitutes or preserves Israel (p. 50). Hence, the intimate encounters between God and individuals in Genesis are replaced by public appearances that demonstrate God’s might and provision. Nevertheless, DeLapp suggests a connection to the former pattern: “The theophanic God who promises now becomes the theophanic God who acts on those promises” (p. 43). The resulting portrait is of a God of action. “He wraps himself in the cloak of an ancient Near Eastern storm deity and comes down from the heavens to rescue his people” (p. 76).

Both Leviticus theophanies build on the Exodus type-scene. YHWH’s glory now appears in liturgical contexts where priestly action initiates the sighting (pp. 79–80). In fact, DeLapp suggests a theophanic structure to Leviticus (pp. 80–81). The vision of divine fire and glory in 9:23–24 comes as the climatic result of cultic processes. The fiery incineration of Nadab and Abihu (10:1–2), however, graphically asserts the boundaries of sacred space and necessitates the discussion of (im)purity and (un)holiness in the remainder of the book. This juxtaposition of theophanic outcomes is theologically important: the priests cannot simply summon YHWH at will; rather, YHWH summons them (pp. 94–95).

In chapter 5, DeLapp argues that Numbers reiterates the type-scenes used in Genesis–Leviticus. At the same time, there is a shift in emphasis as the prime enemy to YHWH’s promises increasingly becomes Israel itself (p. 128). Numbers strategically uses prior theophanic type-scenes to address this reality. For example, the Korah rebellion in Numbers 16 employs the Leviticus 10 type-scene. Once again, priestly action inaugurates a theophany with deadly consequences. Thus, the Korah episode is paralleled with Nadab and Abihu to further persuade readers that one ought not to tamper with YHWH’s appointed means (p. 118).

In the chapter on Deuteronomy, the benefits of a synchronic reading of Pentateuchal theophanies are seen most clearly. DeLapp notes that divine appearances are remembered events in Deuteronomy. Thus, there is not only a canonical awareness that authorizes past narrations but an establishing of how those portrayals are to be interpreted (pp. 133–36). Accordingly, Deuteronomy closes narrative gaps. It is careful to clarify that while Israel saw YHWH, they did not see him in se (pp. 138–39). Hence the book is not aniconic, as often assumed; it is simply determined that readers do not misunderstand prior theophanies (p. 157).

Although DeLapp perhaps overreads in places (I remain unconvinced that Abraham saw the “firepot” in Genesis 15; see, e.g., pp. 46, 58), theophanic type-scenes remains persuasive. Time and again, careful attention to noted type-scene elements facilitates a more nuanced appraisal of the text. DeLapp is able to methodologically distinguish theophany (e.g., Gen 18) from non-theophany (e.g., Gen 19). Missing elements—like the non-mention of “land” in the Hagar-God encounter—highlight theological concerns; in this case, mitigating the threat of Ishmael with respect to the Abrahamic promises (p. 25). Throughout, readers reap the benefits of DeLapp’s final-form approach. Narrative sequence trumps source-critical divisions, which opens up new possibilities for negotiating interpretative cruxes as well as allowing intertextual connections to enrich the reading of the text. The cumulative force of doing so is aptly summarized by DeLapp: “Through the technology of the text, the type-scenes encourage the reader to enter the world of YHWH’s patterned sightings. The text itself has become a priest mediating between the story-world and the reader’s world…. The result is that these visions of YHWH change the reader” (p. 78).