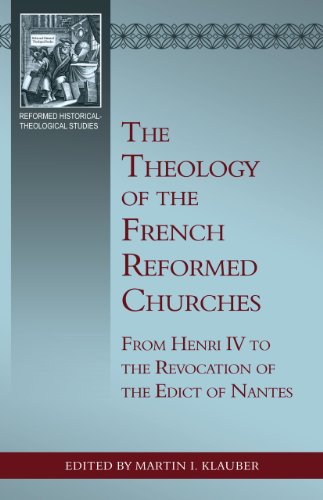 Theology of the French Reformed Churches: From Henry IV to the Revocation of the Edict of Nantes

In Theology of the French Reformed Churches, Martin Klauber aims to resurrect the “theological richness rarely remembered even among Reformed believers in the centuries following their labor” (Introduction). Contributors to this volume accomplish this. Believers from a Reformed background will make many discoveries as they read the book and undoubtedly gain insight into the thought, shape, practice, and difficulties of the French Reformed churches.

The book is a collection of essays divided into two main sections: the historical background and the most important theologians with their thoughts and teachings in historical context, covering the history of protestant churches from the Edict of Nantes (1598), signed during the reign of Henry IV, to its revocation through the Edict of Fontainebleau (1685).

The first essay focuses on the historical and political background between Catholics and Protestants during the lead up to the Edict of Nantes. Jeannine Olson, the chapter´s author, acknowledges that Farrell, rather than Calvin, exerted the most influence in France during this early period.

Olson questions the sincerity of the protestant conversion of King Henry IV since he still embraced Catholicism. Nevertheless, the people of France loved Henry, at least in part due to the Edict of Nantes (1598) which granted freedom of conscience and freedom of worship to Huguenots while still demanding some compromise. The edict manifested some religious tolerations but required the Reformed believers to observe Catholic holidays and pay the tithe to the Catholic church. Additionally, the edict allowed the Reformed churches to maintain their discipline and organizational structures.

The chapter on Beza, written by Scott Manetsch, stands out as particularly well-documented as it details Beza’s connection to Catholic France and his process of publicly embracing Protestantism. Beza wrote the Confession of the Christian Faith (1559), which gives a “forceful articulation of Reformed Christianity in seven chapters, ranging from the doctrine of the Trinity to the last judgment” (Beza in Laussane) with a heavy emphasis on the authority of Scripture. Beza, under a commission by Calvin, finished the translation of the French Psalter after the death of the poet, Clément Marot. That Psalter (1562) became a best seller, reaching more than sixty editions in the first four years.

Thereafter, Manetsch meticulously narrates how Calvin’s Geneva successfully planted some 1240 reformed churches in France. The Company of Pastors recruited, trained, and sent more than two hundred pastors. Despite those efforts, Beza noted the continued need for more qualified Protestant pastors. Manetsch describes Beza’s persecution, including several death threats made by Catholic France, as he directly or indirectly witnessed the murder of hundreds of Huguenots. Persecution in France meant that Geneva became a refuge for Protestant believers and that the academy was filled with France´s best theologians. This educational foundation alone, however, could not guarantee a firm future for the French church.

The following chapters describe the structure of the Reformed churches and the organization of their synods. There were fifteen synods while the Edict of Nantes was in effect. Protestants carefully structured and consciously represented their churches during that time. “Whereas the consistory ‘ruled over’ and ‘governed’ the congregation under its care with a mandate and authority given in Scripture, the colloquies and synods derived their authority from the agreement of the federated churches” (Federation). Furthermore, these chapters show how these churches distinguished themselves from the Catholic structures, not only pragmatically but also theologically. Theodore G. Van Raalte, in his contribution, concludes that French Reformed churches survived a long time because of their non-hierarchical government and because of the unique synodical system—the first of its kind for a national Reformed church.

Donald Sinnema, then, turns his attention to the Calvinist-Arminian controversy and the desire for unity amongst Reformed churches. Sinnema begins by recounting Pierre du Moulin’s (1568–1658) proposal for a two-stage strategy to achieve Protestant unity. The first stage was to establish a common Reformed confession where Arminian views were considered non-essential matters that could be tolerated. The second stage was another conference where Lutherans could be included “to explore areas of agreement and mutual toleration to seek a broader accord with the Reformed” (du Moulin’s Plan for Protestant Unity). Despite the initial optimism, du Moulin later shifted his position: He thought that Arminianism “undermined the very foundations of the Christian faith” (Conclusion).

The first section finishes by narrating the Catholic efforts to bring Protestants back to the mother church. They did this mainly by limiting the Edict of Nantes’s protection over Reformed believers. Luis XIV enforced the politics of legal persecution. These peaceful and legal tactics accomplished the conversion of Protestant leaders and Reformed pastors back to the Catholic church. Thenceforth, from 1679, the Edict of Nantes itself was enforced to diminish the power of Reformed churches. Even before the revocation of the edict, about 250 churches were suppressed, their buildings were torn down, and Protestants were left out of civil and professional positions. These tactics achieved about thirty-eight thousand abjurations in one year (1681), and Huguenots started emigrating to other countries.

By 1685, the Edict of Nantes was effectively useless. The French King finally revoked it when he signed the Edict of Fontainebleau in October 1685. This new edict enforced, among other things, the expulsion of Protestant pastors and the baptism of children in the Catholic church. If children up to the age of 17 did not show up for catechism, they were removed from their parents’ authority and assigned to Catholic parents or Catholic institutions. Despite the prohibition to emigrate, many families and villages fled to the Netherlands, Germany, England, Geneva and Switzerland between 1685 and 1687.

Section two gives the biographical accounts and the theological thoughts of several theologians. First, Albert Gootjes argues that the most influential figure in the period was the Scottish theologian, John Cameron (1579–1625). After recounting the posthumous publication of his writings, Gootjes explains Cameron’s views on universalism and its reception and propagation by his disciples Amyraut, La Place, and Cappel.

The remaining chapters provide detailed descriptions of the life and contribution of Moïse Amyraut (1596–1664), Pierre du Moulin (1568–1658), Jean Daillé (1594–1670), Andreas Rivetus (1572–1651), Charles Drelincourt (1595–1669), Claude Pajon (1626–1685), Jean Claude (1619–1687), and Pierre Jurieu (1637–1713). Their contributions center on a variety of subjects. The authors introduce the reader to names and teachings from the sixteenth to the eighteenth century not widely treated in other publications. These themes range from theology to political life, from apologetics and the doctrine of God to pastoral theology and exegesis.

Lastly, the book includes valuable appendices with translated excerpts of the Edict of Nantes and the Edict of Fontainebleau, giving the reader introductory access to primary sources and confirming the documentation of the aforementioned chapters.

Each chapter not only accounts for the history and thought of French Reformed churches but also excellently considers the historical context that surrounded the Edict of Nantes. The book’s structure evidences this emphasis and establishes the historical background before diving into the particular contributions of the leading theologians in France. One issue that arises is the somewhat repetitious chord of historical facts which—though a product of the format involving numerous authors—could have been avoided.

All in all, this book allows the reader to see not only how the European Reformation impacted France, but also how French Reformed churches with their thought and practice influenced the church elsewhere. Church leaders and academicians should consider these authors’ perspectives since they show the theological pillars in which French Reformed churches established their national church.