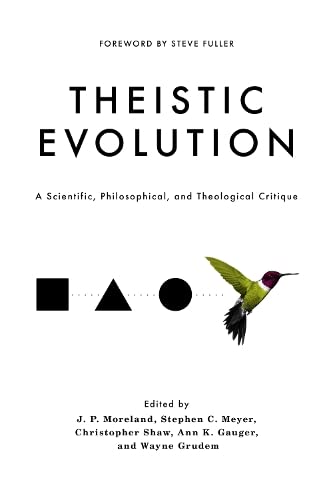 Theistic Evolution: A Scientific, Philosophical and Theological Critique is the latest contribution to the ongoing conversation on origins: thirty-one chapters, twenty-five authors, spanning 1,007 pages. The critiques of its moniker are divided into three sections: scientific, philosophical, and theological. It is not possible to review every article in depth. Instead, I hope to summarize the significance of this work, and explore a constructive response to move us all forward.

This book is a product of the Intelligent Design (ID) movement, centered at the Discovery Institute. This movement is influential in the church and often appears to be motivated by Christian theological concerns. The contributors include Stephen Meyer, Doug Axe, Ann Gauger, Paul Nelson, Casey Luskin, and a host of other ID proponents. By positioning themselves as a non-sectarian science voice, however, only rarely are these theological concerns articulated. Breaking this pattern, Theistic Evolution brings the theology of the ID movement to the surface much more clearly and visibly than prior contributions (such as, for example, Jay W. Richards, God and Evolution: Protestants, Catholics, and Jews Explore Darwin’s Challenge to Faith [Seattle: Discovery Institute Press, 2010]).

Theistic Evolution is a critique of its moniker, as defined by its editors in a specific way: “God created matter and after that did not guide or intervene or act directly to cause any empirically detectable change in the natural behavior of matter until all living things had evolved by purely natural processes” (p. 67). As a Christian who affirms evolutionary science alongside the doctrine of creation, I join the editors and authors of this volume in opposing any view of origins that denies God’s action.

A non-intervention understanding of evolution, however, is a minority position among Christians that affirm evolutionary science. The non-intervention definition applies to Ken Miller, Thomas Oord, and possibly to John Polkinghorne and Karl Giberson. However, it is not accurately applied to Francis Collins, or the vast majority of Christians in science, or the vast majority of Christians I met when I worked with BioLogos. Most allow for God’s action in origins, while doubting science’s ability to elucidate the details. The official response to this volume by BioLogos says the same. Thankfully, the salient disagreement is merely about the limits of modern science, not the reality of God’s action in origins.

Alongside the science, the theological disclosures are surprising. In advocating a “confrontation” approach to science, Doug Axe explains that Jesus charged the disciples with “guarding” the “truth” with their lives (p. 103). Axe applies this teaching not to the confession of the resurrection but to arguments for design. Is that really what Jesus taught? Why, then, did he command Peter to “lay down his sword,” when he leapt to defend the Truth itself incarnate?

The scientific arguments, however, are not convincing. They talk past the mainstream account of our origins without ever actually engaging it (pp. 503–22). Those hoping to understand the strengths and weaknesses of evolutionary science should look elsewhere.

For example, consider the critique of genome similarity as evidence for common ancestry of humans and the great apes (pp. 479–82, 492–93). Human and chimpanzee genomes are very similar, about 98% similar by some measures. The author does not explain, however, there are ten times less differences between humans and chimpanzee genomes than there are between mice and rat genomes (e.g., see The Chimpanzee Sequencing and Analysis Consortium, “Initial Sequence of the Chimpanzee Genome and Comparison with the Human Genome,” Nature 437 [2005]: 69). Even with different measures, mice and rats are much more different than chimpanzees and humans. Why? Humans and chimpanzees mutate slower and diverged more recently. Likewise, human and chimpanzee Y-chromosomes are more different than the rest of the genome. Why? For the same reason; Y-chromosomes mutate more quickly than the rest of the genome. Remarkably, the increased divergence of Y-chromosomes is presented as evidence against common descent, rather than what it is: clear and quantitative evidence for common descent. It is not just that humans are similar to chimpanzees, the pattern of similarity and differences is readily explained by the empirically verifiable mathematics of evolutionary science. This does not at all demonstrate God never intervened in our origins, but most scientists find this convincing evidence for common descent. A scientifically viable alternative to common descent must offer a better explanation with similar mathematical rigor. However, no such explanation is offered here.

One hopeful deviation from this pattern of non-engagement is found in chapter 16 (by Ola Hössjer, Ann Gauger, and Colin Reeves). Tacitly affirming the evidence is strongly against a recent population bottleneck in the last 100,000 years, the authors hope to test for more ancient bottlenecks, as far back as two million years. There are no results to report and this has little to do with disproving evolution. The plans to build and test quantitative models with genetic data, nonetheless, is a promising development. This effort may help clarify what the genetic evidence does and does not tell us about Adam and Eve.

Another exception is James Tour’s chapter on the Origin of Life. Ironically, his parable about a “dream team” of scientists clarifies that life is not like any human design, and in this sense does not appear designed (p. 190). It is, nonetheless, widely accepted that we do not know how the first life arose. Many theistic evolutionists think that God directly created the first cell. As a leading chemist, Tour is confronted with what science can and cannot tell us. In light of science’s limits, Tour does not argue for ID.

In the philosophical section, a primary goal is pressing the case for the detectability of God’s action by modern science. An entire chapter is devoted to explaining why scientists need to listen more to philosophers. I wonder if theologians could help the philosophers.

The theological assumption that God’s action is “detectable” by human inquiry defines most of this section. For example, the possibility that God’s action could be undetectable from a human point of view is specifically discredited and identified with “theistic evolution” by Stephen Meyer (p. 47). This philosophical stance begs a theological question. We affirm that God providentially governs all things, but how much can we know about the details independent of revelation?

At least two authors are not ID proponents. Their contributions are corrective. C. John Collins emphasizes the non-scientific and personal way we come to a knowledge of God’s action; he writes of “discerning” God’s “providence,” rather than “detecting” his “guidance.” Collins also urges for epistemic humility by quoting Stephen Barr, a theistic evolutionist, “We would all be better off if more scientists simply admitted that there are things we don’t understand about the hows and whys of evolution” (p. 681).

The encouragement to epistemic humility and theology of providence is wise. Science, after all, only offers an incomplete view of the world, even when it is correct. If God providentially governs all things, including the random cast of lots, he also providentially governs evolution. Still, science remains silent about God’s action. This silence, however, is because science is limited. This is why James Tour refrains from arguing for ID. Much like a theistic evolutionist, he explains on his website, “I do not know how to use science to prove intelligent design although some others might” (see https://www.jmtour.com/personal-topics/evolution-creation/).

The ID movement wants more than an affirmation of providence. They want to detect God’s action in science. Is this theologically grounded? Independent of discernment and revelation, is God’s action well described as “design,” or reliably “detected” by any human process? If the mechanistic details of God’s providential work are usually hidden, why would we expect anything different in origins?

The theological critique is edited by Wayne Grudem, who lays out twelve theological claims in Scripture that he argues are entirely inconsistent with evolution. Almost all these twelve points directly reference Adam and Eve. This may be the most concise and coherent explanation available of the key reasons why so many Christians are troubled by evolution.

Still, this book leaves me with a burning question. As a scientist in the church and a Christian in science, I see firsthand the strength of evolutionary science. What version of theistic evolution could be theologically sound? This question, I hope, can be received with empathy by a new generation of theologians. Help us find a better way.