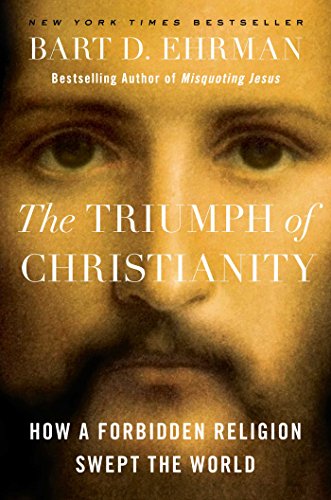 “The ancient triumph of Christianity proved to be the single greatest cultural transformation our world has ever seen” (p. 4), writes Bart Ehrman, the well-known author of numerous works on the New Testament and early Christianity. In this thought-provoking volume, Ehrman seeks to ascertain how “a small handful of the followers of Jesus come to convert an unwilling empire” (p. 7). As Ehrman explains, the rise of Christianity would have hardly been expected during the first century, given the rather unflattering perception that many people had regarding its beliefs and practices. “For a pagan in the early empire,” he observes, “it would have been virtually impossible to imagine that these Christians would eventually destroy the other religions of Rome” (p. 104). For Ehrman, the unexpected advance of Christianity cannot be explained simply by affirming God’s providence or the power of the Holy Spirit. The ultimate triumph of Christianity must be attributed, he presumes, to various sociological developments, compelling features of the religion, or to historical events that proved to be advantageous to its growth.

Among the numerous factors that may have played a role in Christianity’s improbable success, Ehrman concludes that it was, contrary to what one may assume, the exclusive nature of the faith that ultimately proved decisive. The transition from polytheism to monotheism, however, did not occur immediately for many ancients. In a world dominated by polytheism, Ehrman suggests that a growing number of pagans became henotheists who recognized the existence of many gods while acknowledging the supremacy of one particular god. As he explains, “The growing popularity of henotheism in the empire paved the way for the Christian declaration that there is in fact only one god and he alone should be worshiped” (p. 111). Additional factors that also played a consequential role in the unexpected rise of Christianity included the retention of the more favorable aspects of Judaism (p. 112), its emphasis on evangelism (pp. 116–20), and the widespread belief that the Christian God was responsible for a number of miraculous acts (pp. 142–59).

Although many readers will undoubtedly find the work to be an intriguing and insightful treatment of the advancement of Christianity, it should be noted that some of his observations are oversimplified or overstated. Concerning the apostle Paul, for example, Ehrman emphatically states that “Paul was not simply the most significant convert of the first few years of Christianity, or of the first century, or of the early church. He was the most significant Christian convert of all time. One can argue that, without Paul, Christian history as we know it would not have happened” (pp. 71–72). Few would deny the significant influence and importance of Paul. To attribute the rise of a certain form of Christianity to a single individual, however, overlooks the contribution of the other apostles as well as the large number of unknown Christians who took part in proclaiming the Gospel and establishing local churches in new locations.

Secondly, Ehrman at times overstates Constantine’s ignorance of Christian doctrine in the years following his conversion as well as his degree of theological acumen later in life. Regarding Constantine’s refusal to accept baptism and his apparent conflation of Sol Invictus with the Christian God, Ehrman observes that, like many new to the faith, Constantine possessed only a rudimentary understanding of Christian doctrine. Among other things, he may have been unaware of the importance of baptism, that Christians refused to worship other gods, or that there were various ethical requirements associated with the Christian life (p. 30). However, if Constantine were as committed to the Christian faith as Ehrman suggests, it would be difficult to account for his unfamiliarity with such basic beliefs and practices. As Ehrman contends, Constantine’s ignorance of Christian doctrine and practices in the years after his conversion later gave way to an impressive knowledge of Christianity. By the Council of Nicaea, Constantine is described as playing an active role “debating the philosophical meaning of words of Scripture with Christian bishops” (p. 36).

Finally, it would seem that Ehrman overstates the degree to which the triumph of Christianity suppressed theological dissent. He rightly concludes that Theodosius I and his successors were faithful adherents to the doctrines affirmed by the council of Nicaea and that they made little allowance for theological dissent (p. 285). However, while Nicaea was certainly no boon for the advancement of Arian theology, it is widely known that for many years after the death of Theodosius, much of Western Europe and Northern Africa was ruled by several Gothic and Vandal rulers who ascribed to one form or another of Arianism. It would seem, therefore, that in his effort to portray Christianity as inherently intolerant of opposing viewpoints, Ehrman has overlooked the significant theological disputes that lingered into the fifth and sixth centuries. For those who are familiar with Ehrman’s prior works, this is all very ironic. In several of his volumes, he has contended that Christianity during the first three centuries was remarkably diverse. As he writes elsewhere, “during the first three Christian centuries, the practices and beliefs found among people who called themselves Christian were so varied that the differences between Roman Catholics, Primitive Baptists, and Seventh-Day Adventists pale by comparison (Lost Christianities: The Batle for Scripture and the Faiths We Never Knew [Oxford: Oxford University Press, 2003], 1). From a historical perspective, Ehrman overstates both the diversity present in early Christianity and the uniformity of Christianity in late antiquity.

In sum, readers will undoubtedly disagree with some of Ehrman’s conclusions regarding the character of early Christianity and the factors that eventually led to its triumph over paganism. Nevertheless, the volume as a whole provides a helpful treatment of the religious and political environment in which early Christianity unexpectedly advanced. While readers from a more conservative background will be quick to recognize that it was the Lord who continuously added to the number of those in the church (cf. Acts 2:47; 5:14; 6:7; 16:5), Ehrman’s historical investigation of the environment in which this growth occurred is of great value.