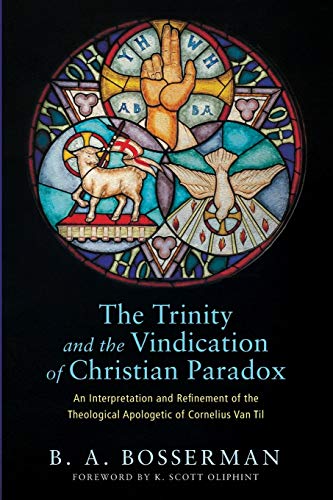 The Trinity and the Vindication of Christian Paradox: An Interpretation and Refinement of the Theological Apologetic of Cornelius Van Til

Written by B. A. Bosserman Reviewed By Nathan Chambers
Systematic Theology

The work of Cornelius Van Til is an enigma. Many are sympathetic to Van Til’s claim that the theological revolution of the Protestant Reformation should entail a parallel revolution in apologetics. Yet turning to Van Til’s writings, one is quickly bogged down in opaque expositions and obtuse analogies with very few examples of what a reformed argument for God actually looks like. Bosserman seeks to remedy the situation in two ways. First, he provides a cogent and relatively accessible analysis of Van Til’s trinitarian system of thought. Second, Bosserman extends the work of Van Til by advancing an argument for the necessary existence of the Triune God of the gospel.

Bosserman begins by offering a useful overview of the theology of “Old Princeton” and “Old Amsterdam” and the philosophy of the “Absolute Idealists” (beginning with Hegel and culminating in the works of F. H. Bradley, Bernard Bosanquet, and John McTaggart), all of which influenced Van Til. This section is particularly dense but valuable for its pithy accounts of various philosophers (especially Aquinas, Reid, Kant, and Hegel) and their influence on subsequent trends in theology. The close reading and synthesis of British Idealist philosophy, whose terminology is often used by Van Til but has since fallen into obscurity, helps in understanding Van Til.

With this frame of reference, Bosserman turns to an exposition of Van Til’s “trinitarian system.” He begins with Van Til’s transcendental argument from and for the Trinity: all predication, even denials of the Trinity, presupposes an absolute and personal harmony of unity and diversity which is only found in the Triune God. Bosserman proceeds to demonstrate how trinitarian doctrine shapes Van Til’s theory of knowledge and logic. Van Til’s theory of knowledge is predicated on an analogy between different types of minds—between the Triune Creator on the one hand and creatures on the other—ensuring that finite human knowledge can be reliable. Next Bosserman organizes Van Til’s suggestions into a coherent, if brief, Christian theory of logic. This logic, following the British Idealists, makes “implication” central, rather than induction or deduction: a concrete portrait of reality, intertwining revelation of God, humanity, and nature, is challenged by various experiences, including further investigation of Scripture, leading to the development of a more comprehensive vision of reality. Bosserman concludes his exposition by showing how Van Til developed various loci of theology as implications of the doctrine of the Trinity. What emerges from Bosserman’s careful analysis is a portrait of Van Til as a precursor to the recent renewal of trinitarian theology.

Based on this exposition, Bosserman raises two criticisms. First, although Van Til argued for God’s oneness and many-ness, the tri-personality of God appears to be an inessential attribute. On the contrary, Bosserman argues, “we should . . . seek a deeper understanding of how (1) tri-personality is indispensable to the unity of God; and (2) the created system of reality reflects its Creator” (p. 158). Second, it is unclear how Van Til can simultaneously make paradoxical doctrines central to his system while criticizing non-Christian thought as intrinsically self-contradictory. What is needed to make Van Til’s argument coherent is a way of distinguishing the apparent contradictions of paradoxes from true contradictions.

In response, Bosserman moves beyond Van Til, proposing arguments for the necessary tri-unity of God along with various other paradoxical Christian doctrines. In brief, Bosserman maintains that although a paradox looks like a contradiction, the poles of a paradox actually imply each other as well as illuminate the larger system of thought in which they are situated, while the poles of a true contradiction negate each other and lead to abstractions. Bosserman’s statement of the Christian system proceeds by implication, taking “a basic portrait of reality, which is discernible . . . throughout the biblical story, as a major premise” to which is added various minor premises, derived from further “revealed information,” in “a way that it both receives illumination from the major premise and challenges its completeness.” Though these premises initially appear to be in contradiction, once “discovered, it becomes evident that neither premise could have ever been true apart from the qualification of the other” and thus form an authentic paradox (p. 173). Following this approach, Bosserman’s analysis proceeds from theology proper to metaphysics, epistemology, ethics, sin, and salvation.

Bosserman’s argument for the necessity of the Trinity, perhaps the most important effort of the book, is a suitable example of the analyses offered in this final section. Bosserman proposes as his major premise “covenantal personalism,” the pervasive biblical teaching that there is “a single personal God . . . [who] is the context/atmosphere within Whom all other things live and move and have their being” (p. 175). All alternatives to covenantal personalism ultimately lead to self-defeating abstraction. Yet this major premise must be challenged by the “distinctively New Covenant revelation that God is in fact three persons” (p. 176). So far this is standard fare. Bosserman, however, advances the argument with the insight that “the uni-personality and tri-personality of the Godhead necessitate one another, and are equally indispensable to that covenantal personalist worldview to which they belong” (p. 177). All alternatives ultimately presuppose an impersonal context within which God relates to creation and/or other gods. A triune God alone can be both personal and absolute (that is, free from any larger, abstract context). Any two members of the Trinity are related to each other only within the personal context of the remaining member: “the Son and Spirit are related to one another within the personal context of God the Father . . . [and] each person in himself is identical with his activity of relating the other two—the Father is that self in whom the Son and the Spirit relate” and so forth (p. 178).

Bosserman continues, challenging the resulting synthesis, “Trinitarian covenantalism,” with further minor premises, such as the apparently contradictory equality and ordered economy amongst the persons of the Trinity and the apparent contradiction between divine simplicity and the multiplicity of divine attributes. Further theological paradoxes addressed include divine immutability and creation from nothing, human knowledge as objective and analogical, the emergence of sin in a good world, and the dual natures of Christ. Admittedly, a weakness of the book is the brevity with which various doctrines are discussed in this final section. This should, however, be excused: Bosserman must demonstrate the utility of his Christian logic and definition of paradox through application to a variety of doctrines and, at any rate, the arguments offered are suggestive and exciting, leaving the reader hungry for more.

Make no mistake: this is a difficult book. Bosserman’s subject matter is demanding and his prose is difficult. I hope, however, that this does not deter the wide readership that this work deserves. In our increasingly post-Christian society, Bosserman’s competence in philosophy and willingness to argue rigorously for the truth of the Christian system can provide both a model and a guide for theological students and pastors alike.