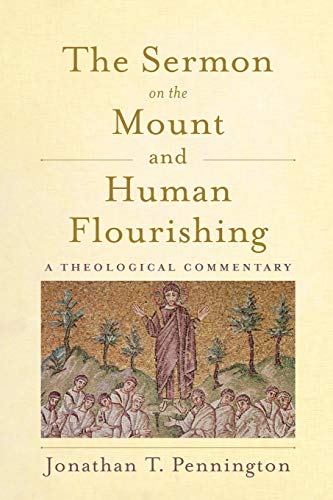 The Sermon on the Mount and Human Flourishing: A Theological Commentary

Pennington presents his expository work on the Sermon on the Mount in three segments. He provides an orientation where he engages both the Sermon’s structure and crucial terminology and concepts. Two expressions consume the bulk of the orientation: μακάριος (usually translates as “blessed”) and τέλειος (ordinarily translated as “perfect”). Seven other significant terms also receive Pennington’s careful attention: righteousness, hypocrisy, heart, Gentiles, the Father in heaven, the kingdom, and reward. Here is where the author also argues for a view that distinguishes his volume, namely that the Sermon needs to be read against the large backdrop of the wisdom tradition framed by the Hebrew Scriptures and the tradition of Greco-Roman virtue ethics. Pennington devotes a slightly larger segment of the book to a commentary on the entire Sermon. Here he treats six divisions of the Sermon, portion by portion. The book concludes with a section devoted to theological reflection, in which the author offers a brief twenty-one-page conclusion that summarizes the book’s argument in the form of six theses.

Inclusion of Human Flourishing in the book’s title connects the Sermon on the Mount with a concept and expression that are commonplace in contemporary culture, perhaps more so among theologians (partly due to the “God and Human Flourishing” project at the Yale Center for Faith and Culture). The book’s initial paragraph signals the thesis, linked to what Pennington contends is the universal human quest: to demonstrate that the Sermon is situated within the contexts of Jewish wisdom literature and the Greco-Roman virtue tradition, both of which feature what he identifies as “the great theological and existential question of human flourishing” (p. 1).

To this end, Pennington argues that the Sermon has a “cultural encyclopedia context” (derived from Umberto Eco). He reasons that the Sermon’s encyclopedic context includes both Jewish wisdom literature and Greco-Roman virtue ethics. In his next two chapters (ch. 2: Makarios and ch. 3: Teleios) he argues for a Jewish context to understand the use of μακάριος as “flourishing,” reflecting the Hebrew אַשְׁרֵי rather thanבְּרָכָה/ברך (often translated with εὐλογέω/εὐλογητός), and τέλειος as “wholeness.” This is more persuasive than his appeal to Greco-Roman literature as a secondary backdrop.

The author avoids English translation predispositions by coining various terms to help readers retain the various distinctions for which he argues: aretegenic (from ἀρετή), asheristic (from אַשְׁרֵי), makarios-ness and macarism (from μακάριος), teleios-ity (from τέλειος), etc. Crucial is his effort to render μακάριος in English as “flourishing” rather than “blessed” because the latter, the characteristic English translation, “indicates active, divine favor” while “flourishing” “is a macarism, a declared observation about a way of being in the world,” a distinction Pennington makes that seems to lack a sharp difference (p. 43). He appeals to the Septuagint’s use of μακάριος to translate אַשְׁרֵי as he features Psalms 1 and 2 as paradigmatic for the NT’s uses of the word in Matthew’s account of the Sermon, which sustains the vision cast by the Psalms, Proverbs, and Isaiah “for what true well-being looks like in God’s coming kingdom” (p. 47). He distinguishes uses of אַשְׁרֵי/μακάριος from בְּרָכָה/ברך and its usual LXX gloss, εὐλογέω/εὐλογητός, used of God’s formal pronouncements of blessings set over against his curses. Thus, Pennington insists that “there is a basic and significant distinction maintained between the (verb) ‘blessing,’ which is an active word and whose subject is typically God, and the state of those who receive this blessing or flourishing, described as the ’aŝre person” (pp. 48–49). Thus, μακάριος (אַשְׁרֵי) and εὐλογέω/εὐλογητός (בְּרָכָה/ברך) are not synonyms. The former accents “a state of happiness” while the latter, “though not excluding such a state … speaks more of being empowered or favored as the recipient of blessing from the Lord” (p. 49). Thus, when Jesus announces, “Μακάριοι are the poor in spirit,” he pronounces a value judgment on such people characterized as “poor in spirit.” According to Pennington, the Bible’s macarisms entail “an implied hortatory function” with the implication that “if one wishes to join the ranks of the happy, one should emulate their virtuous conduct or attitudes” (p. 49). The crucial point of distinction is that μακάριος describes people who are in a state of flourishing which must not be confused with God’s act of blessing, his causing humans to flourish. μακάριος characterizes wisdom literature; εὐλογητός is covenantal language (p. 49). Yet, even as the author attempts to distinguish these terms, he acknowledges that they are tightly bound together, inseparable. No one flourishes apart from “covenantal relationship with the creator God” (p. 50).

At this juncture consideration of the relationships of Jesus with Moses and of the Sermon on the Mount with the giving of the law covenant on Mount Sinai seems necessary but not forthcoming. When the author does engage these relationships in chapter 5, while considering the structure and setting of the Sermon, he does not carefully distinguish between the law as covenant and the Law as Scripture. This is because he reads ὁ νόμος in Jesus’s category, “the Law and the Prophets” (τὸν νόμον ἢ τοὺς προφήτας; Matt 5:17), as a reference to the Mosaic law covenant rather than understanding the pairing of “the Law and the Prophets” as designating the Scriptures (pp. 120–21). Certainly, ὁ νόμος as Scripture and ὁ νόμος as the Mosaic covenant are inseparable because the law as covenant is contained within the Law as Scripture. But failure to observe the crucial distinction between them introduces confusion concerning Jesus’s various sayings within the Sermon on the Mount. In Matthew 5:17 Jesus speaks of the Scriptures, as he does in Matthew 7:12.

These caveats concern important aspects on which the whole book is grounded. With these qualifications in mind, the book is still a treasure trove that one can read with great profit.