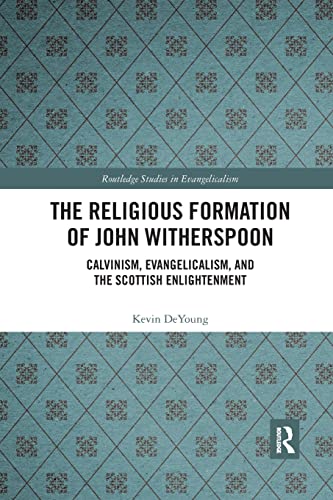 The Religious Formation of John Witherspoon: Calvinism, Evangelicalism, and the Scottish Enlightenment

In the last few decades, there has been a revival of sorts in the academic study of the scholars who taught at Princeton College and Princeton Seminary from the middle of the eighteenth to the beginning of the twentieth century. Until recently, this revival has focused almost exclusively upon rescuing the theologians who taught at the seminary from its founding in 1812 to its reorganization in 1929 from the charge that the authenticity of their Reformed commitments had been compromised by what their critics maintain was their accommodation of the moral, religious, and epistemological optimism of the Scottish Enlightenment. While the body of scholarship that is dedicated to retrieving a more philosophically precise assessment of the Princeton theologians’ relationship to the Enlightenment continues to grow, it is now being supplemented by more broadly historical studies that are establishing that in the main, the scholars who stood in the mainstream of the “Witherspoon” or “Old Princeton” tradition did not abandon, but remained committed to the moral, religious, and epistemological convictions of their fathers in the Reformed faith. Indeed, recent scholarship has established that from the founding of the college in 1746 to the reorganization of the seminary in 1929, those who stood in the mainstream of the “Old Princeton” tradition were not just occasionally but consistently—and even enthusiastically—orthodox.

In this regard, one of the most important contributions to this growing body of more expansive historical analysis is Kevin DeYoung’s recent effort “to explore the theology of John Witherspoon in his historical context, with special attention given to the Scottish half of his career” (p. 4). In The Religious Formation of John Witherspoon: Calvinism, Evangelicalism, and the Scottish Enlightenment, DeYoung offers a meticulously researched, closely argued, beautifully written, and finally compelling corrective to the all-too-common assumption that Witherspoon’s theology—as well as his contribution to the moral and intellectual life of the emerging nation—can be understood correctly without acknowledging the “considerable continuity of thought” (p. 4) between “[his] Scottish ministry and the second half of his career as one of America’s Founding Fathers” (p. i). While DeYoung concedes the obvious, namely that Witherspoon’s “trip across the Atlantic” to serve as the sixth president of Princeton College entailed “a change of scenery and a change of primary vocation” for the erstwhile minister in the Scottish Kirk, he nonetheless insists—in a bold rejoinder to the prevailing historiographical consensus—that Witherspoon’s emigration to and participation in the life of the burgeoning American Republic “did not mark a change in the man or in his most deeply held beliefs” (pp. 162–63). In short, what DeYoung contends and successfully establishes is that Witherspoon’s career will never be understood correctly until interpreters “see him as not only engaged with the Scottish Enlightenment, but also firmly grounded in the Reformed tradition of High to Late Orthodoxy, embedded in the transatlantic evangelical awakenings of the eighteenth century, and frustrated by the state of religion in the Scottish Kirk” (p. 4, emphasis original). When interpreters view Witherspoon from this fuller, more multi-dimensional perspective, DeYoung argues, they will conclude that despite what the consensus of critical opinion would have us believe, there are no grounds for concluding that Witherspoon’s “chief contribution” to the moral and intellectual life of the emerging nation was found where those who embrace the historiographical consensus insist it is found, namely in a transparently unorthodox attempt to establish “a beachhead for an enlightened moral sense philosophy that could undergird [the] republican political convictions” of the Founding Fathers (p. 10).

Among the more important contributions of DeYoung’s analysis, two are particularly noteworthy. First, DeYoung contends that Witherspoon should be remembered not just for being a “minister, president, educator, philosopher, and Founding Father,” but also for being a “Reformed apologist” (p. 5). “Like his theological mentor, the Genevan theologian Benedict Pictet (1655–1724), Witherspoon held firmly to the tenets of confessional Calvinism. And like Pictet,” DeYoung forcefully argues, “Witherspoon was eager to show that the truths of supernatural revelation (i.e., historic, orthodox, Reformed theology) could be squared with reason” (p. 5).

DeYoung’s second contribution of note follows from and is intimately related to his retrieval of Witherspoon’s enduring interest in apologetics, for it has to do with the implications of this interest for the viability of what has come to be known in the scholarly literature as “the Witherspoon problem.” According to this view, Witherspoon should not be regarded as a Reformed apologist during the second half of his career because shortly after he arrived at Princeton College, he accommodated a number of the more progressive philosophical commitments that he had enthusiastically opposed as a minister in the Scottish Kirk. Moreover, he did so to inculcate an understanding of public virtue that he had come to believe was essential to the civic and educational needs of the emerging Republic. In response to this “sea change” hypothesis (p. 151), DeYoung demonstrates conclusively that during the second half of his career in the American context, there was nothing in Witherspoon’s “views on reason, human nature, and true virtue that were not present in his Scottish ministry” (p. 18). He makes it clear, in other words, that Witherspoon was an outspoken advocate of Reformed orthodoxy not just on one but on both sides of the Atlantic. In so doing, DeYoung establishes that when all is said and done, Witherspoon should be remembered not for being a “conduit”—even if only an unwitting “conduit”—of Enlightenment philosophy in the emerging Republic. Instead, he should be remembered for being “a Presbyterian clergyman and a traditional Reformed theologian who found ways to make his old School views relevant in a new day” (p. 18).

For these and other reasons, DeYoung’s incisive analysis comes with my highest and most enthusiastic recommendation.

Paul Kjoss Helseth is a ruling elder at Good Shepherd Presbyterian Church (PCA) in Wayzata, Minnesota. He is also professor of Christian thought at the University of Northwestern—St. Paul, in Roseville, Minnesota.