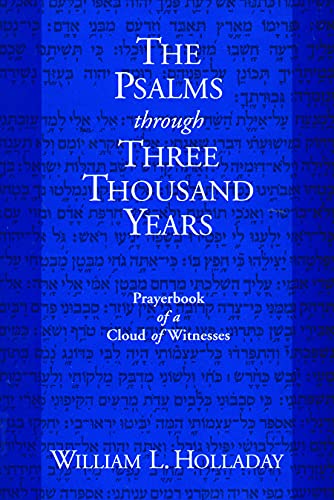 The Psalms through Three Thousand Years: Prayerbook of a Cloud of Witnesses

There are many books on the psalms as they appear within the OT, also books dealing with modern theological issues arising from the study of them, and at least one (Prothero, The Psalms in Human Life) which deals with the history of their use and impact. Professor Holladay deals with all this within the compass of one volume.

His book is written for the non-specialist and takes little for granted, but it would certainly be of value to the theological student, even though he or she will need to augment it from other sources on some aspects of the subject. It is always good to have something wide-ranging to enable you to see the grand sweep of a great subject prior to more detailed study of particular aspects.

Part I is entitled ‘The Psalms Take Shape—a Reconstruction’. Even though evangelical students will not be persuaded by all that is said here, there is much of positive value. The writer makes helpful comments on the OT cultural background. Remarking on the frequent appearances of enemies in the psalms, for instance, he shows in how many ways, in that time and place, a man might have experienced the enmity of others.

The author is an expert on the book of Jeremiah and he makes interesting comments on the relationship between the Psalter and this prophetic book, especially in relation to the question of the possible dependence of one on the other. However, there is not much on the poetry of the psalms.

There are a few references to James Sanders and just two to Brevard Childs, but it is evident that Dr Holladay has been influenced by their general approach. He has a strong sense of the Psalter as a canonical book and not simply as a miscellaneous collection of religious poems. What he has to say about its structure and the significance of the order of the psalms in it is thought-provoking.

Part II is at once instructive and disappointing. It is called, ‘The Psalter through History’. Many readers will find a great deal of its material quite unfamiliar and therefore valuable. The treatment of Luther, of the Roman Catholic use of the psalms and of the psalms in the modern missionary movement is excellent, but the information given on the Scottish Psalter and on the use of the psalms in the Book of Common Prayer is extremely slender. Most disappointing of all is the one chapter on the NT use of the psalms. Most of us would willingly have sacrificed part of the three-and-a-half pages of information on the life and work of C.A. Briggs if, by this means, the 21 pages on the NT could have been extended.

Part III is entitled ‘Current Theological Issues’ and is full of stimulus to new thought about the psalms and how they can be used in Christian worship and Christian living. You may not agree with his approach on every matter, but will find he encourages you to think through a number of important issues. He suggests, for example, ‘how the psalms of lament might extend and stretch and toughen our experience of worship’ (p. 293). The chapter on ‘Censored Texts’, in which he deals with passages normally omitted in public reading, again gains illumination from his studies in Jeremiah. He addresses the question of the use of the psalms in worship and devotion by women—whether satisfactorily, I must leave the reader to decide.

There is a concluding chapter on approaching the psalms from the standpoint of our Lord, based on the undoubted fact that they furnished his own worship manual. He says, ‘His praying of the Psalms can stretch our praying of them. He can adore and praise God fully, while by comparison we can adore and praise God only faintly and fitfully. He can lament the sin of the world, which he took upon himself …, in ways we cannot begin to imagine’ (p. 348).

Altogether a good read—and how beautifully produced it is! If you work through it in detail and lend it to several of your fellow-students, it will probably survive the ordeal and still look good on your shelf!