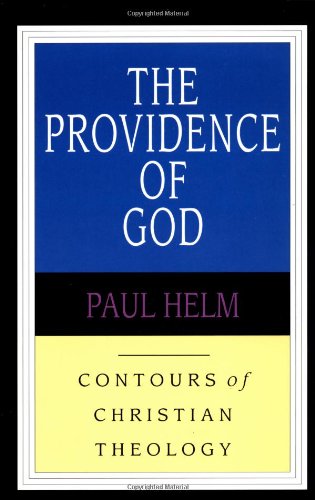 The Providence of God (Contours of Christian Theology)

Rather than offering a comprehensive assessment of recent work on providence (no reference is made, for example, to M.J. Langford’s Providence or K. Ward’s Divine Action), Paul Helm endeavours to argue in favour of a specific model of God’s action in the world, namely what he calls ‘the no risk view’ whereby all events are understood as decreed by God. This view, he maintains, is biblical, it is taught by the most significant Church Fathers and it presents the majestic picture of God as someone who cannot be frustrated (p. 52).

Helm departs from certain fellow no-risk advocates like J.I. Packer by rejecting the illogical thesis that both human libertarian freedom and absolute divine sovereignty co-exist (p. 65); rather, according to Helm, God’s will determines human choices. Helm is thus a compatibilist who sees human volition as part of the nexus of secondary causation behind which God’s primary causation operates (p. 86). To make sense of the notion of guidance he invokes the traditional distinction between God’s secret will (his providential decree) and his revealed will (what he commands) (p. 131). Our duty is to strive to obey his revealed will. Regarding prayer, God both determines the prayer and its answer (ch. 6). Nevertheless our relationship to God may be said to be personal since neither constraint (e.g. parent/child relationship) nor predictability (e.g. in a close, stable relationship) are inimical to personal relations (p. 150).

It has been said that the no-risk view makes God directly responsible for evil so that he must finally be perceived as immoral and humans as amoral. Helm counters that we are responsible insofar as we are both aware of our acts and consent to them (p. 186). He refuses to follow B. Davies in maintaining that God is morally ex lex (p. 166). For Helm, God is good without equivocation. Depending on the circumstances, suffering must therefore be understood either in terms of discipline, or of judgment, or of the provision of the means of achieving a greater good, for example the production of sympathy, compassion and patience (p. 202). The fall must be viewed in terms of felix culpa since the result is the glorifying of God through a greater manifestation of his character (p. 214). The life and death of Jesus reveal that God is not a callous potentate, for he rules through love and ‘weakness’ (p. 224). Helm concludes by stressing that the no-risk view of providence should provide solace to Christians by ‘recognizing that the evil that they and others experience has been sent’ (p. 231).

Amongst contemporary scholarship Helm provides, for me, the most persuasive and philosophically sophisticated defence of the position most of us would associate with Calvinist doctrine, and this in an admirably clear and accessible style. I was almost convinced. But profound problems for the no-risk view remain. I will forbear from discussing the exegetical ones (for example, the biblical motif of divine frustration and disappointment, e.g. Is. 50:2; Hos. 11:8f.; cf. Lk. 7:30) and will concentrate on some outstanding philosophical problems. The first concerns the reality of hell. A perfectly good God could only produce a deterministic universe involving suffering for the greater good if all humans, and perhaps all conscious creatures, attain eternal life. The only morally acceptable Calvinism is the Barthian kind. Helm hints that God’s love is partial (p. 205), but how does this square with his stress on the unequivocal goodness and, presumably, perfect love of God? Given hell, the only possible Calvinist defence seems to be the horror story offered by the Puritan divine, William Perkins, who suggested that God elected the saved so that his Mercy might be extolled and predestined the damned so as to magnify his Justice.

The two divine wills model also continues to trouble. If God’s revealed will is really what he wants to be the case then he cannot be sovereignly in control since it does not obtain in the world. If, on the other hand, God’s secret will is normative, then he must really want people to sin. Indeed, according to the no-risk view, in some sense all that happens must be good since it is an expression of God’s perfect providential will. Catastrophes and wars, therefore, can only be apparently tragic. Admittedly, we should still oppose them out of duty to God’s revealed will, but surely any sense of human pity would be misplaced? A view which seems to point to this conclusion cannot be right.

Finally, a word about the compatibilist notion of freedom. If one is responsible for all the choices that are an expression of one’s will then the compulsive kleptomaniac and the subject acting out a post-hypnotic suggestion should be held responsible, for, after all, neither experienced a struggle of wills and they both happily owned their decisions. No, surely I deliberate in order to decide what to do, not to discover what it is that I am destined to do. On the no-risk model, perhaps we cannot blame God on the Day of Judgment, but surely he cannot blame us either. We might be determined to hold one another responsible but God cannot do so unless he too is determined so to do (Helm does not divulge whether he, like Jonathan Edwards, thinks that the very notion of libertarian freedom is incoherent).

Nevertheless, Paul Helm provides a bold and valiant attempt to restate classic Calvinism with his masterly use of the tools of analytic philosophy. His book is a distinguished addition to the ‘Contours of Christian Theology’ series and I can warmly recommend it.