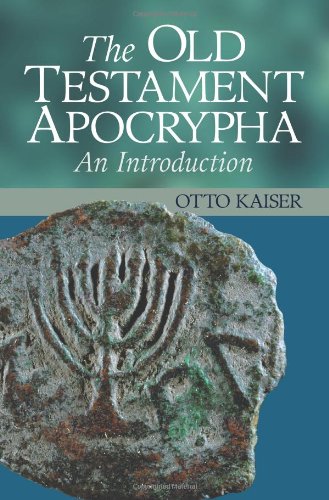 Otto Kaiser offers a brief introduction to the Apocrypha—or Deuterocanonical—books of the Old Testament, which is both accessible and up to date (the original German edition was published in 2000).

The first chapter is a general introduction, listing which are the books that comprise the collection, with a brief note on the attitudes to the Apocrypha taken by the Roman Catholic, Orthodox, and Lutheran/Reformed churches. He moves on to a short discussion of the value of the Apocrypha as historical and theological documents that witness to the faith of early Judaism. Kaiser closes the general introduction by exploring the link between the historical background of the Apocrypha and the development of Jewish eschatology. In this he briefly considers how themes such as the expectation of the return of Zion and an ever increasing focus on the final destiny of the righteous and the wicked are developed in the light of present historical circumstances. Kaiser tends to assign later dates to the development of such themes and traditions, and this is certainly reflected in this book.

The headings under which the discussion is divided are Thesis (summary of key observations about the book); Issues (notes on issues of contemporary scholarship on the book); and Comment (Kaiser’s specific observations and clarifications). The scheme of the introductions in flexible and guided by the specifics of each book, so that the headings may appear in different order, or be omitted altogether, in each chapter. Each brief introduction is followed by a short, but very helpful bibliography with major works for further study—mostly in German. The bibliographies are also subdivided by headings, characterized by the same flexibility seen in the chapter’s body. There is no explanation for the rationale behind this arrangement, but while the lack of a consistent structure could be at time frustrating, it avoids imposing artificial frameworks on the discussion, allowing it to be shaped around the peculiarities of each text.

Due to the brevity of this book, the treatment of some of the issues can naturally be quite superficial, but Kaiser’s familiarity with the sources guarantees that readers interested in the Apocrypha will have a solid and informative starting point. A major contribution of the book lies in the author’s demonstration of the value of the Apocryphal books as a witness to the response of Judaism—both in Palestine and the Diaspora—to an increasingly Hellenized, and many times hostile environment.