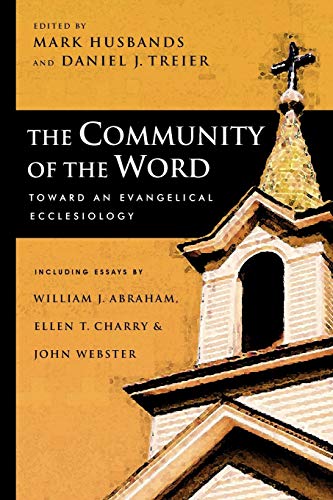 THE COMMUNITY OF THE WORD: TOWARDS AN EVANGELICAL ECCLESIOLOGY

Issuing from an April 2004 conference at Wheaton College the editors’ introduction is followed by essays presented in five thematic parts as follows. Part One ‘The Church in “Evangelical” Theologies: Looking Back’ is the section that most clearly reflects the US context. It includes historical essays that: (1) highlight the lack of reflection on the church by such figures as Finney, Edwards and Hodge in their concern for personal experience of salvation; (2) examine the failings of a dispensationalist church that is really a temporary sideline to God’s plan for Israel; and, (3) assess the situation at the end of modernity, as Jonathan Wilson interestingly tracks the influence of popular authors Francis Schaeffer, Charles Colson, Rick Warren and Brian McLaren. Given the constraints of space, his analysis is helpful—(in dealing with these writers at all), but his proposal of an improvisational style of ecclesiology is vague.

Part Two holds out the promise of ‘Locating the Church Dogmatically’ by offering two essays by John Webster on the import of the Doctrine of God, and the invisibility/visibility of the church, and a third by Darrell Guder on the church’s missional character. Webster’s concern to maintain a proper distinction between God’s prior work of grace and human work of response, characterized by hearing, in the doctrine of the church clearly conflicts with forms of ‘participation’ language in some Missio Dei theology, or as found in Ellen Charry’s ‘Sacramental Ecclesiology’ essay from Part Four.

This fourth section, ‘The Church as Sacramental Community?’ also includes a presentation of John Howard Yoder’s Ecclesiology, and a helpfully nuanced essay by Gary Badcock on ‘The Church as “Sacrament” ’ that, amongst other strengths, takes the work of the Holy Spirit seriously.

Part Five aims at ‘Locating the Church Culturally’. The writer encourages us to think the cultural challenges that the church faces are those of the high-minded ‘Radical Orthodoxy’ movement or post-modern turnings to the visual/iconic. These are important essays for those in academia, but those uninitiated into the discussion are likely to affect scepticism. This is a shame, as the seriousness with which these academic-cultural agitators take the church is a challenge to pastors and members of evangelical congregations who may be stuck in a conformist cultural rut that finds it increasingly difficult to hear the gospel for the community in the power of the Spirit. Nevertheless, for the strong of heart, James Smith’s engagement with radical orthodoxy from a reformed perspective, here and in other publications, is the best way into appreciating the often alien(ating) theological discourse of John Milbank and company. In the final essay of this section William Dryness talks about ‘Spaces’ (managing to squeeze in time undercover) in a provocative questioning of use of church space that raises the debate above the utility of pews against chairs. The collection closes with an eucharistic sermon by Ellen Charry.

The observant will be wondering about Part Three. This part deals with ‘The Church as a Moral Community’. William J. Abraham assesses what he sees as the creeping idolatry in ecclesial concern for a kind of politically correct ‘Inclusivism’ whilst Allen Verhey examines ‘The Church as Community of Moral Discourse’. Abraham voices a heartfelt cry of lament upon the baneful influence of a concern that ensures that ‘[w]hen we worship together now in mainline corporate settings, the first question before us is not whether God is present but whether the right range of diversity is present’, (137). Like the psalmist, without knowing the detailed recipe for future resolution, he knows in the end that the gospel cannot be neutralized. He concludes:

Yet within her bosom the church possesses the medicine for her many illnesses, and there is no reason to think that someone someday will not find the recipe we need to cure us of our current waywardness. Once the medicine takes effect, the grace of God now resisted will be the source of boundless healing; it is the gospel of our Lord and Savior, Jesus Christ, which alone can save us from our corruption and idolatry. We can surely hope that evangelicals will be assiduous in ensuring that this medicine is kept available for all who seek its healing (145).

A concretely contextual contribution with a strongly pastoral concern.

This is a useful introduction to the various ways in which the church is making a comeback into evangelical theology. The footnotes open up avenues for recommended reading. They could have been better presented with further bibliographies from the contributors.