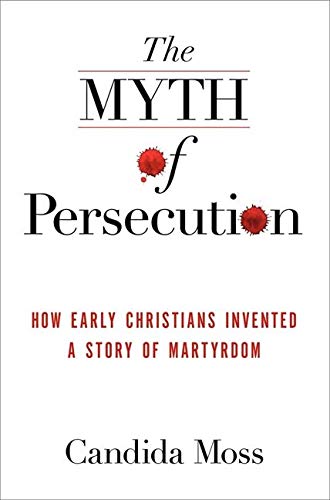 Candida Moss’s The Myth of Persecution brings to mind John Lennon’s song Imagine: “Nothing to kill or die for / And no religion too / Imagine all the people living life in peace.” In her book, Moss imagines a world without Christian martyrdom, and she imagines that this new world might be free of right-wing politics as well. Moss believes that she can bring about a more peaceful political discourse in America by imagining that Christianity’s martyrdom phenomenon never happened. Christianity’s history of persecution makes it impossible for Christians to cooperate with their political enemies, so she attempts to erase the persecution of Christians from history. Once Christians have learned that they never really suffered, then they will be ready to live peaceably with the political left.

In order for Moss’s agenda to have any hope of success, she has to construct a straw man. Throughout the book she derides “the Sunday-school story” in which the church has been ceaselessly persecuted for the last two thousand years. Anyone even passingly familiar with Christian history knows that the church did not suffer continuous persecution since the crucifixion of Christ, yet Moss pretends that persecution without ceasing is the metanarrative of the American church. I expected to meet a straw man in the pages of this book, but I did not expect him to be so flimsily constructed. As it turns out, however, Moss must construct him so flimsily because her evidence is embarrassingly weak.

She questions the historicity of Christian persecution by attempting to rob Christianity of martyrdom. She argues that the martyrdom phenomenon was not uniquely Christian and that all religious traditions have had martyrs. To make her case, Moss must explain away the fact that Christians coined the term “martyr.” Even though earlier peoples did not use the term, they still exemplified the concept. She provides examples from the Greek, Roman, and Jewish traditions, claiming that the Christians are not doing anything new; they are merely emulating earlier models.

Moss’s examples, however, exhibit various degrees of tendentiousness. She presents Achilles, Iphigenia, Lucretia, Socrates, and the Maccabees as martyrs. She can to do this because she defines martyrdom as “dying for something greater than oneself.” She makes this definition her standard, saying, “Just because the Greek term martys was not used to describe these individuals does not mean that they do not meet our modern definition of a martyr” (p. 52). Here we see the first of many problems with the book; for a book that purports to tell you the true history of persecution, it is astonishingly ahistorical.

Why does Moss apply a modern definition of martyrdom to ancient peoples? Because she would not be able to knock down even the flimsiest straw man if she used historical categories. Did the Greeks and Romans think of Achilles as a martyr? Of course not. I am somewhat sympathetic, however, to Moss’s difficulty because pinning down the historical meaning of martyrdom is not easy. The Greek word martys originally meant “witness,” and it continued to carry overtones of its original meaning throughout the later history of the church. When martyrs died, they bore witness or testimony to their hope in Christ’s resurrection. In some places at some times, Christians attached the idea of sacrifice to martyrdom. Martyrdom proves to be a moving target with, depending on time and place, even more shades of meaning creeping in. But instead of investigating a historical question, she throws out some anachronistic musings on death in the ancient world without bothering to ask about how people at the time interpreted these deaths.

After defining her terms to fit her agenda, she attempts to show that Christians who wrote martyr tales depended on the literary examples from their Greco-Roman context. It should not come as a surprise that writers from antiquity sound like writers from antiquity, but Moss relates this information as if she has uncovered some gnosis that will shake the foundations of the Christian worldview. Greek and Roman Christians wrote like Greeks and Romans.

After attempting to rob martyrdom of any distinctiveness through equivocation, Moss tries to rob Christianity of its earliest martyrs. She claims that since the earliest martyr stories betray evidence of editing, we cannot know what the martyrs actually thought about their own deaths. Since we cannot know if they thought of themselves as martyrs, we cannot be sure that they were martyrs. This argument works only because Moss holds the ancient texts to an unreasonable standard. She demands first-person or eyewitness accounts that exhibit no evidence of personal bias or later editing. She wants a court transcript, and anything less than that leaves us in doubt as to whether the earliest martyrs really were martyrs.

Conveniently she does not hold other sources to this same impossible standard. She never questions whether Socrates’s death happened exactly as Plato described, even though Plato has numerous personal reasons to revise Socrates’s death as a condemned criminal into a noble sacrifice. Let me once more note that Moss considers Achilles and Iphigenia to be martyrs; they did not even exist. She freely uses double standards to make her point.

She also leaves out important information that would hurt her thesis. One of the most egregious omissions has to do with the Acts of Justin and Companions. She must admit that this early martyr tale almost attains the impossible standard of veracity that she has set. But she dismisses this text because most people read the middle recension instead of the earliest version of the text. The later version exhibits an editorial hand. However, she does not tell the reader that the earliest version contains the very confession of Christ that she claims we do not find in early martyr texts. She cannot admit it to the reader because she wants to erase the historicity of the earliest martyrs. This omission is no mere oversight. She knows the contents of these texts. She compares them at length in an earlier book in which she suggests that the earlier version of Justin’s martyrdom should be viewed as an accurate record.

As the book wears on, her arguments do not get much better. She claims that Nero could not have persecuted Christians in 64 because Christians did not exist in 64. Never mind that Tacitus calls them Christians; Tacitus was wrong. Even so, it is funny that Socrates could be a “martyr” before the term “martyrdom” was invented, but Christians could not exist in 64 because the term had not been coined yet. Not only does Moss ignore or dismiss important evidence, but also her logic exhibits contradictions. She questions a martyr text’s veracity when it suits her, but then she uses the same text uncritically when talking about suicide because it suits her. She claims that the church historian Eusebius gave Christianity its worldview of constant persecution, when actually Eusebius’s books reveal Christian triumphalism. She tries to bust the myth of persecution with a combination of unwarranted speculation and “new” findings that every student of church history knows, but then she perpetuates simplistic myths about the crusades even though her endnotes indicate that she has read real scholarship on the crusades. I did learn, however, that martyrs are the source of modern-day domestic abuse.

The book reflects Candida Moss’s disapproval of Republican politicians who inject religious language into their political discourse. She criticizes Rick Perry, Rick Santorum, and Newt Gingrich, claiming that their rhetoric is founded upon the martyrs, but one could probably make a better case that their speeches resemble the ranting of Cicero in his First Catilinarian Oration. Moss desperately attempts to make her field relevant to contemporary culture, but instead she ends up damaging her own credibility with her tendentious arguments.

The entire book is an extended example of the post-hoc-ergo-propter-hoc fallacy. Moss notes some similarities of language between Greeks, Romans, and early Christians. She sees similar rhetorical flourishes in our American political discourse. One obviously caused the other. Don’t worry about those intervening fifteen hundred years because there is nothing to see there. The Roman Catholic Church’s role in medieval Europe? Ignore it. The Protestant Reformation’s critique of the cult of saints? Unimportant. The Enlightenment’s critique of everything? What does the Enlightenment have to do with modern political discourse? Rise of American Fundamentalism? Irrelevant. Even if Moss’s erasure of the church’s persecution were based on historical evidence, which it is not, too much has happened in the world to justify Moss’s simplistic thesis. Moss has studied the early martyr texts, but she did not convince me that she understands the larger history of the church and its relationship to the West.

Moss is actually guilty of the very thing that she hates. She hates the sensationalized religious rhetoric in America’s political discourse. This book is nothing more than a sensationalized political agenda masquerading as religious history. During the Middle Ages in times of plague, Christians sometimes spread rumors claiming that Jews caused the disease by poisoning the wells. Moss writes, “The myth of Christian martyrdom and persecution needs to be corrected, because it has left us with a dangerous legacy that poisons the well of public discourse” (p. 256). Both of these rumors are baseless, and if I used Moss’s logic, I would be forced to argue that medieval rumormongering caused her to write this bad book.