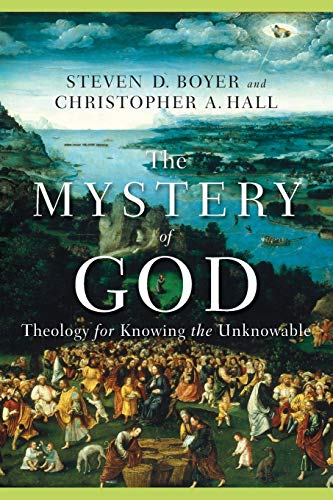 The Mystery of God

Some ideas seem to enter evangelical thought as assumptions more than through systematic thought. Until recently, theological mystery or paradox was a prime example. There was shockingly little reflective, self-critical analysis of mystery prior to James Anderson’s excellent monograph on paradox and apologetics. The Mystery of God by Stephen D. Boyer and Christopher A. Hall is another helpful contribution to the discussion, though it is also disappointing in certain respects. Christopher Hall is an Episcopalian paleo-orthodox scholar and serves as the chancellor of Eastern University. Together with Thomas Oden, he is responsible for the Ancient Christian Commentary on Scripture. Steven Boyer teaches theology at Eastern University.

One of the key metaphors the authors use for mystery is the sun. The glory of God in mystery is too dazzling for our direct gaze, but we can recognize mystery because it illumines our understanding. In part 1 (“the sun”) they distinguish mere puzzles from revealed mystery (the Pauline mystērion). Mystery might stem from limited information or arise from non-analytical information about God, but the sense of mystery most relevant to this work is “dimensional”—transcending logic in the same way that a person who has only known two dimensions cannot comprehend three.

Chapter 2 surveys the biblical necessity of mystery, grounding it in God’s radical transcendence over every created thing. Chapter 3 is an excellent historical survey, tracing paradox in the church fathers, the medieval period, and the Reformation and contemporary thought with special attention to Gregory of Nyssa, Aquinas, Luther, and postmodernism. Part 1 concludes with the epistemological question of how knowledge of God is possible at all, given his transcendence. We can know God because of the image of God in man and because God is graciously restoring humanity from the effects of the fall.

Part 2 (“the landscape”) explores mystery in five specific areas. After comparing heretical “solutions” for the Trinity with biblical information, the authors conclude that the Trinity is ultimately inexplicable. Still, we can find real analogies for the Trinity in human relationships because we are God’s image-bearers. Similarly, chapter 6 points out the necessity of the incarnation for human salvation, placing the mystery of the incarnation in the context of the broader biblical metanarrative. The discussion on prayer (ch. 8) explores God’s immutability and impassability, concluding that prayer compels us to enter into God’s intentions for shalom—the well-being of his restored creation.

Chapter 7 discusses mystery and salvation by pitting two different approaches to the problem. Calvinists start with biblical premises and follow rigorous logic until they run up against God’s love and justice. At this point, the authors assert, Calvinists make an arbitrary appeal to mystery. Arminians, on the other hand, start with a commitment to libertarian freedom and find themselves contradicting biblical information. The book argues that mystery should stand between these extremes: freedom mysteriously begins in God, and it is then mirrored in his image bearers.

The final chapter is troubling, as Boyer and Hall discuss mystery and world religions. Arguing from general revelation and the fact that no one holds a monopoly on truth, chapter 9 suggests that believers should learn from the assertions of non-Christian religions. In fact, even explicitly counter-biblical assertions such as God’s impersonality (Hinduism) might become theological insights for the discerning theologian.

There are many things to appreciate about this book—particularly the analysis of mystery itself and the historical survey in part 1. Nor are the more specific discussions in part 2 without benefit. Boyer and Hall typically answer questions by placing them in their broader theological context within the metanarrative of Scripture. In the process, they make some helpful connections. Unfortunately, one is often left wondering how much these discussions truly relate to mystery. On the Trinity, the incarnation, and prayer, the reader finishes with less regard for the tensions as they stand. Ironically, the authors’ explanations seem to dull the sense of tension in the biblical text. In its place, mystery begins to feel more like an open door for mystical imagination than an opportunity for exegetical precision and humble submission to the confines of Scripture.

The book’s discussion of mystery in salvation is disappointing. Why frame the tension between two theological systems rather than identifying the asymmetries in the text? And is it really fair to criticize Calvinism for adhering to biblical propositions, seeking logical consistency while working outward, and then accepting mystery where logic can go no further? Given a high view of Scripture, what other legitimate approaches could there be?

But the chapter on world religions is easily the most problematic. While general revelation is an established theological category, Scripture everywhere points to the suppression that results, not the fresh insights of sinners with open ears and willing hearts. The clarity and breadth of inscripturated revelation dwarfs the truth about God found in nature. To use Calvin’s metaphor, Scripture is always the lens through which we see general revelation clearly, not the other way around. Where does Scripture speak of false religions positively or encourage us to learn from them? We hearken to anti-biblical religions only at our own peril, and mystery is not a powerful enough concept to rationalize that fact. It is unfortunate that a book so helpful in some respects and so necessary in evangelical discussion should conclude with such misleading and faulty suppositions.