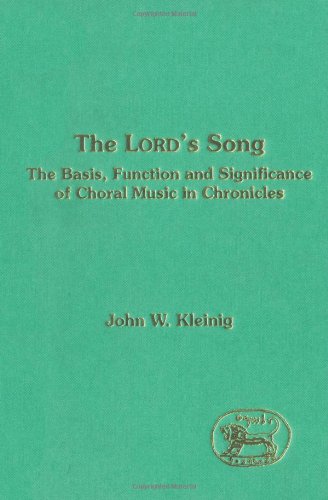 The LORD’S Song: The Basis, Function and Significance of Choral Music in Chronicles (JSOTS 156)

What part should music play in Christian worship? This is one of those problems that has led to perennial controversy among Christians. Several of the reasons for such disagreement are fairly obvious, such as strong emotional and cultural expectations, but there is no doubt that the Bible itself adds to the difficulties. For example, it is rather ironic, if not a little embarrassing, that despite the time and energy that this issue occupies in church life, the NT says practically nothing about it. A further complicating factor is that the main biblical material on music and worship occurs in the much neglected books of Chronicles and in some of the obscurer parts of the Psalms. It is little wonder, therefore, that attempts to introduce a biblical dimension into the whole issue are frequently superficial, even by those who respect biblical authority.

When seen in this context, Kleinig’s contribution is an all-too-rare, in-depth investigation of the nature and theology of musical worship in the Bible. It was apparently inspired by a comment by J.S. Bach, and takes the books of Chronicles as its object of study. A wide range of issues are covered, from routine matters such as vocabulary and function of music to its wider significance in worship.

It was David rather than Moses who introduced musical worship to Israel. A foundational charter for the practice is provided by passages such as 2 Chronicles 5:11–14 and 29:25. These explain how music became part of Israel’s worship through prophetic authority and divine presence, and also legitimate its ongoing use in temple worship. Kleinig also examines the various components of musical ritual, including its times, places, personnel and instruments, before moving to the most interesting part of the book, namely the ritual and theological significance of ‘the Lord’s song’.

In Kleinig’s view, music belonged essentially to temple ritual. It was particularly closely associated with the daily burnt offerings, in contrast to the atonement sacrifices which lacked any musical accompaniment. The singing was actually synchronized with the burnt offering, in order to proclaim God’s gracious presence among his people. Music was therefore for the praise of God, especially in presenting God to the congregation by proclaiming his name and announcing his acceptance of his people. Above all, it was the ritual function of musical worship which determined its meaning, and according to Kleinig, it could have no independent significance apart from its ritual context.

This volume contains a careful analysis of a range of important topics, but it cannot really be regarded as a comprehensive treatment of the subject, since the author rarely strays beyond his set agenda. It is true that a brief nod is made in the direction of recent anthropological work on sacrificial ritual, but it is disappointing that little is done to relate the findings to musical worship elsewhere in the OT. On literary issues, no concession is given to arguments which might undermine the unity of the work, even in important sections on musical worship such as 1 Chronicles 15–16 and 23–27. Similarly, issues of an historical nature are generally not touched upon, even in the case of the much disputed question of how the groups of Levitical musicians developed.

Nevertheless, several features in Kleinig’s work are to be welcomed. It is certainly the most detailed treatment of the topic, filling a vacuum in Japhet’s magnum opus on the ideology of Chronicles. It takes a positive attitude to the unity of Chronicles, and the valuable theological focus enables the reader to move beyond questions concerning the origin of the Chronicler’s views. Questions will be raised, however, about some of the positions adopted. Did musical worship invariably lead to some kind of theophany, for instance, or was the temple primarily thought of as God’s royal court? One also gains the impression that the author’s whole approach to music in worship is rather restricted. Phrases such as ‘choral music’ or ‘liturgical song’, for example, evoke a picture of a distinctive kind of modern liturgical worship, with all the attendant trappings! Similarly, the rather formal view of worship implied by Kleinig cannot necessarily be deduced from the Chronicler’s descriptions of the Israelites singing and making music in God’s presence. Tire frequent references to wholehearted and spontaneous joy suggest that the Chronicler saw temple worship more as a means of encouraging every Israelite to adopt a similar attitude towards God rather than as a form to be followed on set occasions in a particular place.