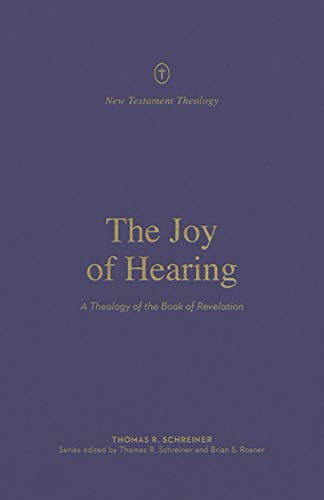 The Joy of Hearing: A Theology of the Book of Revelation

In this initial volume of Crossway’s New Testament Theology series, Professor Thomas Schreiner of the Southern Baptist Theological Seminary sets out to provide a thorough, scholarly, and readable account of the distinctive biblical-theological themes of Revelation, which many Christians regard as “the most puzzling book in the New Testament” (p. 12). Schreiner explains, “The book of Revelation both attracts and repels readers” with its strange yet captivating visions (p. 17). Nevertheless, believers today desperately need its message “that God rules, even in an evil day; that God has not forsaken his people; and that goodness will finally triumph and prevail.” Revelation reminds us “that a new world is coming, that a new creation is coming, and that all will be well” (p. 18).

The book’s title reflects the seven “blessed” statements in the Apocalypse that promise comprehensive eschatological happiness and satisfaction to those who truly hear and obey this prophecy (Rev 1:3; 14:13; 16:15; 19:9; 20:6; 22:7, 14). Schreiner writes, “The joy of hearing Revelation consists of heeding the call of Jesus, listening to the words of the Spirit, and remaining confident that God rules on his throne” (p. 12).

The Introduction ably explains Revelation’s historical setting and genre. Schreiner adopts the majority view of evangelical scholars that John wrote near the end of the first century during Domitian’s reign, when Christians experienced persecution and social pressure. Revelation combines features of epistolary, prophetic, and apocalyptic genres; the latter is particularly important for interpreting the book’s pervasive symbolism and its disclosure of “the true nature of things” from a transcendent, divine perspective (p. 28).

Chapters 1–2 first consider the world’s deafness and disobedience to the truth, and then the saints’ obedient hearing. Schreiner intriguingly opens his study by contrasting unbelievers and adversaries (the dragon, the beast, the false prophet, and Babylon) with the people of God who “conquer” and persevere in faith. The Joy of Hearing is organized rather differently from two similar books on the theology of Revelation. Richard Bauckham’s Theology of the Book of Revelation (Cambridge: Cambridge University Press, 1993) has chapters on God and the Lamb before a lengthy treatment of “the victory of the Lamb and his followers” (ch. 4), and he addresses Revelation’s critique of Roman power and vision of divine judgment as subsections within the chapter on God, “the One who is.” In All Things New: Revelation as Canonical Capstone (Downers Grove, IL: IVP Academic, 2019), I begin with three chapters on the Triune God, then discuss the followers of the Lamb (ch. 5) and address the beast and Babylon in ch. 6 (“The Battle for Universal Worship”). While Schreiner does not explicitly explain why he organizes the chapters as he does, I commend his consistent emphasis on the urgent need for believers to “hear the message so that they truly grasp what is going on in the world and so that they persevere until the end and refuse to compromise with Rome” (p. 44).

Chapter 3 focuses on the sovereignty, holiness, and judgment of God, who rules on his heavenly throne. Schreiner laudably handles difficult theological questions surrounding God’s permission of evil, arguing that while God is not directly responsible for evil in this world, “evil exists within the circumference of God’s sovereign will” (p. 69). John’s throne room vision in Revelation 4 uses rich OT imagery “to describe the indescribable,” amazing readers with “the splendor and loveliness of God himself” (p. 73). Schreiner understands the seals and trumpets to portray judgments throughout the church age, while the comprehensive bowl judgments are poured out near the end of history. He helpfully reflects on the pastoral significance of Revelation’s emphasis on God’s justice and judgment of evil, which offers comfort to suffering Christians and also encouragement to persevere in faith.

Chapter 4 expounds the message about Jesus, “the center of Revelation” (p. 103). This wide-ranging chapter ably expounds the book’s “extraordinarily high Christology” (p. 104) while also touching on various other topics such as the saving work of the slain lamb, the sealing of the 144,000 (all those redeemed by Christ), the vision of the dragon and the woman (who signifies God’s people), Christ’s return, and the final judgment, which represents “the final vindication of believers” (p. 139).

Chapter 5, “The Testimony of the Holy Spirit,” is the briefest in the book. Schreiner takes the enigmatic saying about “the spirit of prophecy” in Revelation 19:10 to mean that the Spirit inspires the “‘essence’ and heart of prophecy” and “centers on the testimony about Jesus Christ” (p. 142). He helpfully emphasizes the need to hear and heed true revelation, but he could have developed further the contrast between “what the Spirit says to the churches” and the competing claims of the false prophets (“Balaam” and Jezebel”) and “unclean spirits” that seek to lead people astray. Schreiner rightly understands “the seven spirits” to signify the Holy Spirit. He notes briefly a possible allusion to Zechariah 4, but I would have liked to see more reflection on Isaiah 11:2 as a potential background for Revelation’s seven-fold Spirit.

Chapter 6 expounds the final reward for believers in the new creation. Revelation merges together the images of the new creation and new Jerusalem (following Isa 65–66), offering an enchanting and enthralling picture of “God’s presence with his people” (p. 150). Schreiner explains that “the eschatological consummation has to do with a people and a place,” the Lamb’s wedding and God’s transformed temple-city (p. 158). This chapter does not draw out Revelation’s contrast between Jerusalem the bride and Babylon the harlot, as Schreiner chooses to discuss Babylon the great in chapter 1.

Chapter 7 discusses the thousand-year reign with Christ in Revelation 20. While this may strike readers as anticlimactic after a discussion of the new creation, Schreiner explains that this chapter functions as “a kind of appendix” (p. 161). Schreiner surveys the arguments for postmillennialism, premillennialism, and amillennialism, concluding that “the amillennial interpretation … has many strengths since it fits with the reading of the entirety of the Scriptures, but the premillennial position in many ways seems to be a more natural way to explain Revelation 20” (p. 178). Regardless of one’s millennial view, it is important to keep in mind that the thousand years do not continue forever, while “the new creation is eternal, where we see our God face-to-face” (p. 178).

The brief Epilogue sums up the book’s stress on the urgent need to hear God’s word, the everlasting joy promised to conquerors, and the glorious hope of the coming new world, in which “the joy of dwelling with God and the Lamb will never grow old” (p. 180).

In summary, The Joy of Hearing offers a well-written, exegetically responsible, heart-stirring treatment of major themes in the book of Revelation. Schreiner’s work is comparable in length to Bauckham’s Theology and shorter than my All Things New. Each of these three books has areas of overlap and unique emphases, and Schreiner’s distinctive contribution is his sustained focus on the call to hear and heed the consummate revelation of the risen Christ. The Joy of Hearing is essential reading for pastors and teachers and is accessible enough for students and thoughtful Christians to benefit from this rich and rewarding study of Revelation.