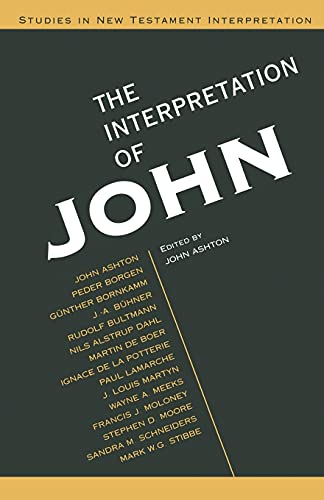 The Interpretation of John

As with other books in this series, here are reprints of articles by a variety of scholars which suggest answers to the problems of (in this case) John’s Gospel. John Ashton has listed three areas of discussion that derive from Bultmann’s agenda: History (where does John’s Gospel fit into first-century Christianity?); Theology (what is the central insight of the Gospel?); Composition (what was the process that produced the Gospel in its present form?). This limitation of the agenda means that the book completely ignores the issue of the historicity of the Gospel account. The chief value of the book to many will be the translation of important articles from German and French and the gathering into one book of articles from a variety of journals. No contribution is later than 1972 and English-speaking Johannine scholars like C. H. Dodd, C. K. Barrett, R. E. Brown and J. A. T. Robinson are not represented.

The book opens with a chapter by Ashton in which he expands on the agenda set by Bultmann and explains various ways in which this has been met both by scholars represented in the book and others. The first contributor is of course Bultmann. Strangely, Ashton has not translated the article of 1925 to which he refers in his introduction, but one from 1923 which discusses the Prologue. He traces the concept of the Logos from the Wisdom literature of the OT and the intertestamental period. Ashton leaves out Bultmann’s transitional argument for these ideas to be found also in Manichean and Mandæan sources but does give the beginning to Bultmann’s search for non-Jewish origins of the wisdom image. Bultmann’s skill as an expositor of Scripture is clear in the early part of the article, but when he enters on his search for non-Jewish sources, the speculative nature of his arguments becomes clear. He regarded references to John the Baptist in the Prologue as inauthentic, but Lamarche, in the following article, shows how the structure of the prologue forms a chiasmic whole which is related to conflicts between Jews and Gentiles in the church which are also shown in the parallel structure of Ephesians 1. He argues that the Johannine Λογος is equivalent to the Pauline μνστηριον

I. de la Potterie in an essay on Truth establishes that the word is central to Johannine theology and that the usage is consistent with the Wisdom tradition of Israel. To import a gnostic dualistic background increases rather than solves problems of interpretation. Bultmann’s positing of Gnostic background for the ideas of the Fourth Gospel is again under attack in Borgen’s article on God’s Agent in the Fourth Gospel. He finds links not only with the OT and Philo, but also with Merkabah mysticism. The Johannine writings are thus an indication of the Jewish background to gnostic/Mandean mythology.

Bornkamm’s review of Käsemann’s Testament of Jesus, whilst questioning his one-sided account of the Gospel as a Gnostic work, yet is still convinced that ‘John presupposes gnosticism’. He rightly criticizes Käsemann for failing to use the material in the Farewell discourse. There are some debatable assertions in this article, for instance that not only the word, but also the concept of, ecclesia is completely absent from the Gospel. This depends on a very narrow definition of ecclesia. Burge’s recent book The Anointed Community presents a different view of the Johannine ecclesia as a Spirit-led community.

J. L. Martyn contributes an essay which suggests that Käsemann’s description of the Fourth Gospel would be better applied to the supposed Signs Source of the Gospel. Nils Dahl in a most useful article takes up a question that Bultmann ignored—the Johannine attitude to the OT and the history of salvation in the old covenant. Dahl argues that OT characters are among the witnesses to Jesus. The coming of the Christ transcends the contrast between Jews and non-Jews. The Jews however ‘take the law and Moses, the Scriptures and the fathers, even God himself, as a religious possession of their own … they use their religious possessions as means of self-defence when they are confronted with the true God, revealed in Christ’ (p. 131). Thus they ‘represent the world in its opposition to God’. ‘Thus they end up representing the world even in putting Caesar at the place of God, whereas they deny the fundamentals of their own faith and forfeit the history of Israel.’ The Gentile believers are the ‘other sheep’ who are joined to the prototypical Israelite disciples, like Nathanuel, who came, saw and confessed the Christ. Dahl suggests that in this John comes close to Pauline assertions in passages like Rom. 11:16–22 and Eph. 2:11–22. This is a heart-warming article which has probably not been sufficiently regarded by subsequent scholars.

The final article by Wayne Meeks, entitled ‘The man from heaven in Johannine sectarianism’, has been influential in subsequent scholarship. In this article he expounds the theme of the descent/ascent motif in the Gospel.

There is much useful material in this book. Ashton has done well in putting together a collection of essays which demonstrate the variety of Johannine interpretations being made and the lack of any scholarly consensus.