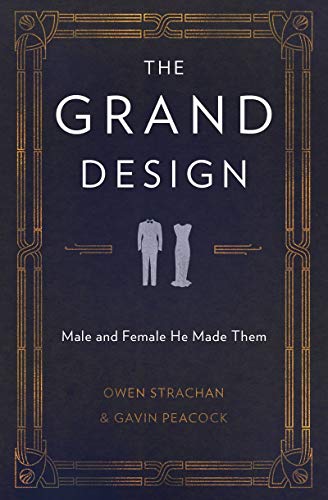 The Grand Design: Male and Female He Made Them

After laying out the recent emphasis on the fluidity of gender in contemporary culture, the authors organize their project into six main chapters. In chapter one, they sketch out the major themes of their project, which finds its basis in Genesis 1:26–27. All human persons are made in God’s image, and “an essential part of being an image-bearer is maleness and femaleness” (p. 22). From this vantage, they move to discussing how the differences between the genders are necessary for fulfilling the dominion mandate given to the first couple. It is only after the sin of Genesis 3 that dissolution between the genders begins to unfold as a consequence of the curses on sin, which are “a curse upon existing complementarian roles” (p. 39).

In chapter two, the authors discuss the tendency, since Adam, that men have to abdicate their responsibility to be leaders. This loss of identity leads women to act in traditionally masculine ways. In response, they elucidate “The Corinthian Challenge” from 1 Corinthians 16:13–14, organizing the rest of the chapter into a reflection on the five imperatives given there. Men must be watchful over sin and personal purity: “Biblical manhood means leadership and leadership means watchful protection and provision for women” (p. 54). Men must stand firm in the faith: “A biblical man spends time with God and he is a biblical man to the extent that he does this” (p. 57). Men must act like men and be strong: they should take action, responsibility and instruction well. Men act in love: “God wants men who are authoritative, but not authoritarian” (p. 62).

In chapter three, womanhood is summarized under three headings: role, attitude, and response. In the first section, the authors note that Eve was made to be Adam’s helper. They contrast this view with a secular culture that teaches that a good life equals a successful career. Because most women will marry, they should focus on the nurturing of their children, look to their husbands as leaders, and help them as they lead. “As a woman obeys God’s pattern, she will feel freer and more feminine” (p. 76). In the second section, they argue that a woman should cultivate an attitude of reverence and respect in her speech, dress, and conduct. In the third section, they outline the thrust of the chapter: “the purpose of submission is rooted in the sovereignty of God in salvation” (pp. 86–87).

In chapters four and five, the authors unpack how their reflections on biblical manhood and womanhood relate to Christian living in practice and proclamation. Because marriage is an image of the relation between Christ and his church, the design of marriage is that wives would submit to their husbands and that husbands would cherish and protect their wives. “In a marriage, headship and submission look like love and respect” (p. 103). Likewise, within the church, God has designed the roles of leadership as male roles. In embracing these differences, biblical men and women present the most compelling counter-cultural argument to the sexual revolution. In chapter 5, they discuss transgender identity and homosexuality. Transgender ideology and homosexuality, they explain, represent a subversion of God’s design for family and sexuality. To respond to these ideologies, we need to speak truthfully about sin, guide sinners to Christ, and develop a broader sexual ethic that includes teaching on biblical manhood and womanhood.

In the final chapter, the authors argue that complementarity is not a “take it or leave it” doctrine for seven reasons: it shows the purpose of humanity, helps explain sinful instincts, provides a script for living, tells us what is vital in marriage, drives us to invest in the church, explains sex better than secularism, and helps us appreciate singleness.

This book has many strengths. It provides a survey of significant biblical passages that defend the main contours of complementarianism and strongly locates gender distinction within the context of God’s design for humanity. It invites its readers to delight in a doctrine that is often thought of as restrictive (especially for women). Above all, the authors’ encouragement to men and women to pursue Christ is vivid through prose that can often only be described as breathless.

I hesitate to criticize a text that has been so well-endorsed, but I have two reservations. One is the way that intra-Trinitarian relations are used as a model for gender relations, especially because some of the Trinitarian discussions are troubling (e.g., when the reader discovers of God that “[a]t the height of His creative work, on the sixth day, He became a Father” [p. 26]). One could remove all such arguments, and the book would in no way suffer for it.

The second reservation regards the discussions of biblical womanhood. The authors have little to say about women who work, single women or otherwise. “Care and discernment are needed here,” they note (p. 77). However, beyond mentioning some jobs that they believe women probably should not do (e.g., drill sergeant or men’s soccer referee), no guidance is forthcoming. Saying that a woman should lead “in a feminine way (like Deborah in Judges 4)” is insufficient (p. 78). What does that mean? The reader is looking to the authors of this text to explain biblically what this “feminine way” of leading is or how a single working mother can appropriate the design described in this book. They fail in this task.

This book does not advance new arguments beyond the texts mentioned in the footnotes. As a complementarian, I would have appreciated the book more if it had broken new ground. Its unique contribution is in its call to delight in, rather than dread, an important biblical doctrine.