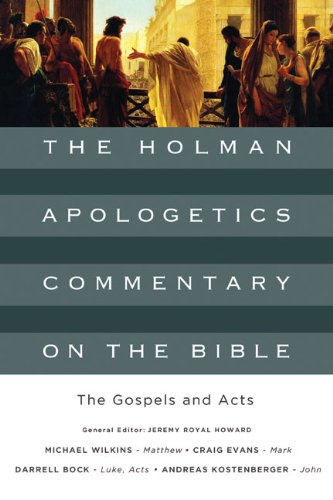 The Gospels and Acts

This is a welcome volume, the first in a series which will cover the whole Bible. The aim of the series is not to provide full commentaries, but to identify particular passages which raise questions and to answer those questions. The present book on the Gospels and Acts is substantial, running to approximately 800 pages: Michael Wilkins’ treatment of Matthew covers 192 pages; Craig Evans’ on Mark to 128, Darrell Bock’s on Luke to 172; Andreas Köstenberger’s on John to 136. Bock also treats Acts in 130 pages.

The volume does much more than address problems of a narrowly historical nature. The authors consider questions from a much broader sphere of apologetics. There is interaction with Mormon interpretation of particular statements, as in the discussion of whether Matt 5:48 assumes the potential for humans to become gods (p. 57), and of whether there was a sexual union between God and Mary according to Matt 1:18 and John 1:18 (pp. 22, 510). There is also interaction with Islam (p. 22), and with Catholic views of purgatory (in relation to Matt 5:26) and the perpetual virginity of Mary (in the comment on passages about Jesus’ brothers and sisters). Christological issues raised by Jehovah’s Witnesses are touched upon in the treatments of, for example, Matt 4:1 and of course John 1:1 (cf. also Acts 1:9–11). There are also matters of philosophical interest, such as whether God can do absolutely anything (p. 129): does ‘with God all things are possible’ (Matt 19:26) mean that God can ‘make a square circle’ or—to use the example common among British philosophers—cook himself a breakfast too big for him to eat? Also addressed are claims made among new atheists about the morality of Jesus and God (pp. 439, 528). Köstenberger addresses naturalistic interpretations of the feeding of the five thousand in John 6. More straightforward questions which might be raised by Christian readers include those of why Jesus as the sinless son of God might be a candidate for baptism (p. 42), or what is meant by the imperative ‘do not judge’, given that Christians are called to be discerning (p. 61).

Overall, the individual commentaries are skilfully done. There is a consistently high quality of discussion across the four authors and five books which is impressive. There are some peculiar interpretations, such as the idea that the impulse for Herod’s disturbance in Matt 2:3 was the large size of the Magi’s entourage and the resulting impression that invading forces would come from the east to assist the installation of the Messiah as king. In other cases, one could of course add further potential solutions, such as John Wenham’s explanation of Mark’s ‘at (the time of) Abiathar the high priest’ (Mk 2:26), namely, that this means something like ‘in the liturgical/literary section about Abiathar the high priest’ (cf. Mark 12:26; Rom 11:2). There are also some editorial glitches (such as a reference to “Licona, Location 5666”, and the use of the Greek letter pi for papyrus number references). These are minor matters, however. In general, the book is sound. It is not a weakness of the book that the authors have different views on certain questions, such as the number of temple cleansings, on which Wilkins and Evans for example seem to disagree. Individual commentators also leave questions open: on the differences between the Matthean and Lukan Sermon on the Mount (p. 50) and genealogies (p. 371), Wilkins and Bock respectively supply the evidence for several different possible solutions without pronouncing definitively on which may be correct.

More importantly, perhaps, it would have been helpful to have more effective cross-referencing. In some places, an issue is discussed helpfully but ignored elsewhere; for example, the Luke commentary is the only place to have a substantive discussion of the ‘Messianic secret’ (p. 409), which is not really touched upon in the parallel sections. There are elsewhere some cross-references (e.g., pp. 155, 222, 234, 272), but some are not particularly helpful; for example, the kingship of Herod in Matt 2:1 and of Antipas (a tetrarch) in Mark 6 are not of the same kind (cf. p. 241). The comment on Matthew’s ‘blood of Zechariah, son of Berachiah’ (p. 153) has a helpful cross-reference, but it is odd that the issue is treated more substantively in the unproblematic Synoptic parallel in Luke 11:51. This place is also indicative of a further structural weakness: the Matthew commentary has about three-quarters of a page on this issue, and Bock has about a page and a half. Surely here, it would be better simply to have a single, substantive discussion rather than one long discussion and one shorter but still long-ish comment. The same applies to the numerous analogous situations, as one sees the same problem arising in the discussions of, for example, the listings of the disciples (2 pages in Matthew, and a page in Mark and in Luke), and of the Gadarenes/Gerasenes (a short comment on Mark 5:1, a substantial paragraph on Matt 8:28, and over a page on Luke 8:26). The eschatological discourses would have especially benefited from a single, focused discussion.

Similarly, it would be helpful to have more “further reading” supplied on particularly difficult issues, given that the commentary form and the scope of the volume’s coverage of all four Gospels and Acts mean that the treatment of difficulties will inevitably be quite brief. For example, on the issue of the timing of the return of Jesus, the reader could be guided to A. L. Moore’s The Parousia in the New Testament (Leiden: Brill, 1966) or S. S. Smalley’s ‘The Delay of the Parousia’ (JBL 83 [1964]: 41–54).

One final observation. Perhaps more could have been done positively and constructively in this volume. Most of the comments are concerned with answering objections, and this was what the authors were requested to do by the series editor at Broadman and Holman. The back cover reports, ‘The authors were provided an index that identified verses known to be relevant to the topics of apologetics and biblical reliability. They restricted their comments to these verses, plus any others that they recognized as germane . . . . Typically, each commentary note begins by stating the challenge or challenges regarding the text at hand . . . The contributors take each challenge seriously and seek to describe viable solutions . . . .’ Occasionally, however, the authors are more positive, as for example in Bock’s comments on Luke 1:1–4 and the ‘we’ passages in Acts, and those of Evans on Mark 15:21. Perhaps more could have been done to supply positive evidence for the reliability of the gospel tradition and the coherence and authenticity of the Gospels. Whether this kind of material should be included, however, may depend on how broadly or narrowly one defines the apologetic task.

These criticisms, however, do not take away from the fact that this is an extremely helpful book which will be very useful for students and indeed almost any Christians. I recommend it heartily and look forward to future volumes.