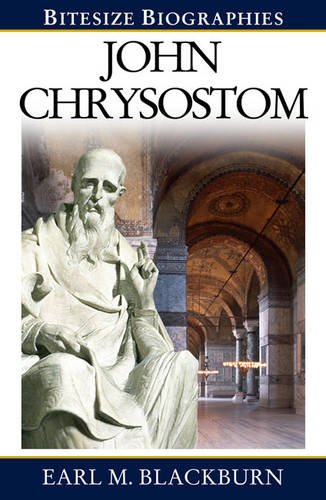 Sometimes biographers ruin a good story in the telling. They try to cram every detail of the subject’s life into the book and address every theory about his life, conspiracy or otherwise, that has ever been proposed. This approach often leads to biographies that are informative but not enjoyable. Thankfully, Earl Blackburn has avoided that pitfall in his biography of John Chrysostom. The purpose of this biography is to give readers a view of a major figure in church history in a manner which both delights and instructs. This book deserves full marks on that score.

John Chrysostom has all of the major components of a historical biography. It gives a historical background to his life and ministry, outlines his youth, and traces the major epochs of his ministry. Blackburn outlines Chrysostom’s rise to be the Bishop of Constantinople and shows the ways his ministry impacted both the contemporary setting and church history. The book outlines the structure and basic content of Chrysostom’s teaching and theological writings. Additionally, at the end of the volume, Blackburn offers fifteen lessons for the reader to learn from this historical exemplar.

This book is a well-researched text written so as to be accessible to a broad audience, which includes laypeople. It is eminently readable, conveying the message well. This is the sort of biography that is edifying to read. In 120 pages, the reader can get a glimpse in one of the most famous exegetical, expository preachers from the Patristic era. Blackburn demonstrates the significance of Chrysostom’s approach to Scripture. His high view of Scripture shaped his character, driving to godliness when the political potential and vast wealth that came along with the See of Constantinople were available to him. It is plain from this biography that Chrysostom was a man of the Word who saw Scripture as central to the Christian life. In the chapter on Chrysostom’s preaching and theology, Blackburn summarizes fourteen principles from Chrysostom’s book, On the Priesthood. These principles repeatedly emphasize the centrality of Scripture in the life of a minister of God.

Chrysostom was engaged in fulfilling the Great Commission. According to Blackburn, “He was able to persevere and endure his dark trials because, among other things, John was kingdom-minded and most desirous for the conversion of the heathen to Christ” (p. 73). Chrysostom organized the evangelization of the nomadic Goths, considered barbarians by the cultured Greeks. Then, to demonstrate the power of the gospel across cultures, Chrysostom had a Gothic convert speak, in his native tongue, from the pulpit to the dismay of the aristocratic congregation. The gospel and its power to save were paramount over merely human interests.

In a biography written in a popular style, there is often a temptation toward hero worship. This book, however, is not hagiographic. Though Blackburn does not invest much space critically evaluating Chrysostom’s role in various political issues of the day, he does point out several times where Chrysostom lost his temper or was overzealous in solving a problem. Chrysostom, as described by Blackburn, is human, but a virtuous human. Chrysostom’s faithfulness came despite the opportunity to live ostentatiously as a bishop in the capital of the Roman Empire. In our day and time when news stories focus on moral failures of ministry leaders, it is good to read the story of someone who served faithfully until the end of his life.

This book is not an academic biography. It lacks the scholarly apparatus that makes following Blackburn’s research possible. This lacuna becomes a weakness at a few points where Blackburn cites Chrysostom or another scholar’s work but does not give all the necessary information to track the quotation down. However, such an apparatus would have likely interfered with the main purpose of this book, which is to tell the story of John Chrysostom well and winsomely. In this case, the benefit is worth the cost. The more significant weakness is the lack of a list of books for further reading. As Blackburn invested significant time in his writing and research, a short bibliography of the best books by and about John Chrysostom would have been a welcome addition. Hopefully future titles in the Bitesize Biographies series can supply a short list of recommended reading.

Blackburn should be commended for authoring an excellent book. John Chrysostom is a biography that communicates clearly, speaks truthfully, and feeds the soul. This is the sort of book that a student, pastor, or scholar can savor over a cup of coffee at the close of a long day’s work.