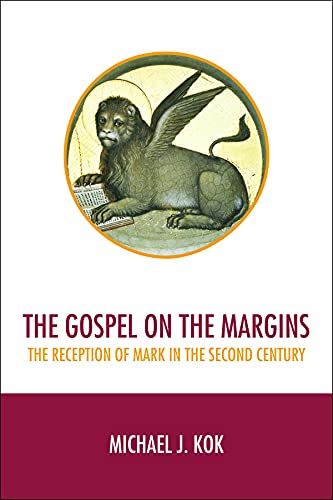 The Gospel on the Margins: The Reception of Mark in the Second Century

In The Gospel on the Margins, Michael J. Kok probes the question of why the Gospel of Mark would receive the lacklustre reception that it did in the second century and yet still survive to hold a place in the New Testament canon. Stating that “solely the authority of Peter’s name, once attached to Mark, rescued it from oblivion” (p. 12), Kok spends the bulk of the book exploring two possibilities: firstly, whether “the tradition is correct that Mark is a storehouse of Petrine reminiscences” (p. 12; chapters 1–3); and secondly, whether Willi Braun’s theory is correct that “the patristic authorities credited the text to Peter as the symbolic figurehead of their communities” (p. 13; chapters 4–6).

Chapters one to three are devoted to subjecting “the patristic association of the evangelist with Peter to historical-critical scrutiny” (p. 14). In Chapters 1 and 2, Kok assesses the forms of biblical criticism that led to a decline in the consensus that Mark was connected with Peter, and the arguments of those representing a “re-emergence of the patristic tradition” (p. 57). He is sympathetic to some of the conclusions of form-, redaction-, narrative- and historical-critical scholars, but he does acknowledge that their arguments are not water-tight (p. 56). He is more certain in his rebuttal of the arguments for a Petrine connection, asserting the anonymity of the Evangelist and thus the unlikeliness of direct Petrine or Pauline influence (pp. 105–6). While Kok claims to “have tried to fairly evaluate the arguments” (p. 104), he is occasionally too ready to reject the conservative arguments without convincingly presenting his alternative, such as in his response to Hengel’s argument regarding titles (pp. 66–68).

Chapter 3 is devoted to examining patristic and New Testament references to the individual “Mark” in order to “pinpoint when he became linked with Peter and identified as the author of a Gospel” (p. 107). His examination of the patristic evidence establishes that it is solely traced through Papias (p. 160), which raises doubts about the tradition’s veracity.

Kok’s exploration of the New Testament data focuses on the authorship and date of the biblical texts. He argues for late dates for the texts that explicitly link Mark with Peter: 1 Peter (late 1st c. CE) and Acts (c. 110 CE). While he does not explicitly admit it, Kok’s thesis stands or falls on this late dating; distancing these texts from living apostles and eyewitnesses conveniently marginalizes the biblical testimony to the connection of Mark and Peter. Kok’s argumentation is not sufficiently robust to convincingly close the case on this point.

Kok himself acknowledges the thrust of chapter 4 to be an argument from silence that needs further justification (p. 184). Avoiding the “orthodoxy-heresy binary,” he prefers a differentiation between “centrist” and “radical” groups within a diverse second century Christian milieu (p. 166). He then cites reception history, and reader-response theories specifically, to assert that these groups claimed apostolic authority for their positions by “setting themselves up as guardians of apostolic tradition (teaching), apostolic succession (office), and apostolic writings (authoritative scriptures)” (p. 170). This, along with a more detailed examination of patristic attitudes towards Mark in Chapter 5, continues to build the theory that Mark could be used to bolster a community’s ideological goals, even if they did not necessarily appreciate its literary value (p. 173, 177, 185).

In his final chapter, Kok turns to assess patristic references to the Gospel of Mark and scribal revisions within the text itself in order to establish its use in the second century context (p. 229). He identifies second century concerns with Mark as its low Christology (p. 237) and its openness to esotericism in light of the secret knowledge given to the disciples (p. 238). He finds that Papias acknowledges interplay between apostolic and heretical teaching but does not reveal any use of Mark by his theological opponents (p. 242). Irenaeus identifies its use by groups arguing adoptionist Christologies (pp. 243–47). Kok finds that mirror readings of Clement’s use of the rich man pericope (Mark 10:17–31) suggest that Clement used it to counter strict ascetic teachings and low Christologies (pp. 249–50). A brief appendix discussing The Letter to Theodore, a text attributed to Clement, is also presented as supporting evidence. Scribal amendments to Mark by other evangelists and scribes are shown to reflect similar concerns.

Kok concludes in favour of his thesis that the gospel was associated with Peter to legitimate the text for use by centrist Christian communities and “snatch it out of the hands” of their opponents. He views this as a “liberating thing for the gospel” as it allows a fresh take on the gospel and the evangelist, appreciating it for its own voice (p. 268). The gospel’s presence in the canon “ensured that its countercultural proclamation of the ‘good news of Jesus Christ’ may speak in our world today” (p. 269).

The Gospel on the Margins offers an interesting explanation of Mark’s place in the canon despite its lukewarm reception in the second century. Kok’s discussion of the patristic context is informative, and his portrayal of the adoption of texts by Christian factions for ideological purposes is intriguing. While his argumentation does not consistently prove convincing, his thesis raises a pertinent question for the contemporary church: Do we allow scripture to authoritatively speak into our beliefs, practices and emphases, or do we simply adopt it to the extent that it supports our pre-conceived opinions?