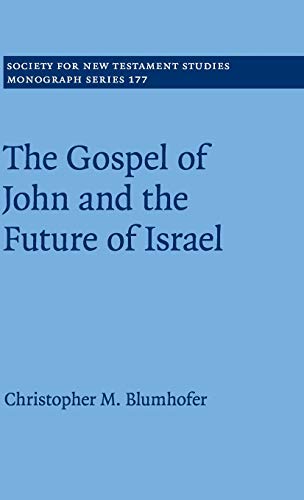 The Gospel of John and the Future of Israel

Christopher M. Blumhofer (PhD, Duke University) is currently visiting assistant professor of New Testament at Fuller Seminary and ordained in the Presbyterian Church (USA). A former employee of Christianity Today, Blumhofer has published in New Testament Studies, Review of Biblical Literature, and Cambridge Companion to the Gospels (forthcoming). Originally his dissertation under Richard B. Hays, The Gospel of John and the Future of Israel is Blumhofer’s first full-length monograph.

The volume’s aim is to demonstrate that John’s Gospel frames a narrative creatively manifesting a commitment to the future of Israel. Written against Bultmann’s imposing interpretive challenges over John’s debated history and theology, Blumhofer’s solution is to synthesize various stands relating to John’s view of first-century Judaism. The linchpin is Christ—the king of Israel and exemplary Jew (John 1:49; 4:24)—who connects Israel’s past to her future. The Fourth Gospel, then, presents a “theological vision of Israel” as a basic element of its gospel message, with Christ holding together both its past and future (pp. 1–3).

The volume’s three central chapters trace the “narrative argument” of John vis-à-vis Israel’s eschatological future. By “narrative argument” the author means that the Fourth Gospel is a narrative that shares elements of Greco-Roman bios, but it is not merely narrative. Read as a whole, it also contains a historical and theological argument relevant for its Second Temple period, answering how the Jewish tradition can remain faithful to its ancient past while anticipating its future. Following the introductory chapter, this idea is developed in linear progression through a three-step arrangement covering John 1–20: Chapter 2: Announcement (John 1–4); Chapter 3: Debate (John 5–10); and Chapter 4: Crisis (John 11–20). The narrative argument leads to a “theological center” proposed for the Gospel of John in the book’s concluding chapter: Jesus is the only one by whom the God of Israel leads his people into their eschatological future (p. 225).

A major argument unfolded throughout is that the Fourth Gospel is written within a first-century Jewish “epistemological crisis” (pp. 33–35). By this is meant a specific sub-group John calls οἱ Ἰουδαῖοι, representing a stream of first-century Judaism refuses to acknowledge Jesus for who he is—their Messiah who connects Israel’s past to its promised future. A significant portion of the discussion is spent on this issue, with the author carefully distinguishing between the terms “Jews” (Ἰουδαῖοι) and “Israel.” Contrary to modern tendencies that conflate “Jews/Jewish” and “Israel,” they are not coextensive in the Fourth Gospel; to assume so is to commit significant anachronism. Whereas the “crisis” of the Ἰουδαῖοι (and its related Judaism) was epistemological, Israel’s “crises” were christological and eschatological. The gap between the concepts is bridged christologically. Summarized, Jesus is the one who brings Israel’s future into identity (p. 212).

Blumhofer’s monograph offers a refreshing contribution to Johannine scholarship that succeeds in synthesizing John’s Gospel. By his “narrative-argument” Blumhofer achieves a coherent reasoning for the Fourth Gospel’s origin that can bear the weight of the entire Gospel, viz., that the future of Israel is indeed a major concern for John and that Israel is ushered into her future through Christ (pp. 224–25). Such a case for the Fourth Gospel distances itself from similar structures that have been proposed—one recent is example is John Ashton’s “proclamatory narrative,” which yields suspicion toward the Gospel’s historicity. Blumhofer’s approach is to be commended for viewing the Gospel of John holistically, each strand serving to connect the future of Israel with her Kingly Messiah.

Meriting further praise is Blumhofer’s criticism of previous interpretive approaches viewing John’s use of Ἰουδαῖοι as anti-Semitic (cf., e.g., select essays from R. Bieringer, D. Pollefeyt, and F. Vandecasteele-Vanneuvill, eds. Anti-Judaism and the Fourth Gospel [Louisville: Westminster John Knox, 2001]). He rightly refuses to define Ἰουδαῖοι by wholesale categories, whether geographical, sociological, or via historical-reconstructions—all of which yield subpar meanings for Ἰουδαῖοι in the Fourth Gospel. By choosing to leave the Greek term Ἰουδαῖοι merely transliterated Ioudaioi, the author wisely escapes assumptions attached to modern terms. Related are the fitting critiques offered of supersessionism, which has unfortunately punctuated readings of John throughout Church history. Rejecting a theology of replacement of Israel by the church, the monograph offers an alternative reading that maintains a future for Israel connected through Christ (pp. 187–93). Finally, an insightful connection Blumhofer draws between the “righteous suffering” of King David and King Jesus is a worthy contribution in itself, inviting future dialogue (pp. 194–211).

A few possible weaknesses do present themselves. First, John 21 does not factor into Blumhofer’s argument at all, and no explanation is given as to why. One can presume its dismissal from the study revolves around the never-ceasing debate over the placement and/or integrity of John’s final chapter within the Fourth Gospel. In any event, it would seem relevant to explore implications of Jesus’s restoration and commissioning of Peter and how that might relate to future Jewish and Christian relations. A more significant critique is that despite repeated claims made throughout regarding the “future of Israel,” no actual future for the nation is ever given. In other words, the volume never explains if Israel—since the writing of John—still has a national future. Rather, Israel’s “future” is rendered as a present absorption into Christ. Among other texts, surely Acts 1:6–7 is relevant to the argument as there Jesus himself suggests the arrival of Israel’s kingdom is still future and dependent on His Father. While the author admits that his argument of Israel’s fulfillment by Christ “looks like supersessionism” (e.g., p. 46), such a fulfillment is still a form of supersessionism. Thus, a systematic irony remains in the volume in that the Fourth Gospel’s Israelology is replaced or superseded by Christology. Perhaps a future study that explores connections between John’s theological vision for Israel and that of Acts would clear up the matter.

Critiques aside, Blumhofer’s The Gospel of John and the Future of Israel is a welcomed addition to Johannine scholarship. The volume is a penetrating analysis of the Fourth Gospel that demonstrates Israel will continue by way of Jesus—the Jewish messiah and Israelite king. In this sense, the entire volume can be considered an answer to an internally implied question advanced throughout the Fourth Gospel’s narrative: Which of the two competing visions for the future of Israel will win: that of the Ἰουδαῖοι or that of Jesus? There is little doubt, as the volume makes clear, that the latter is victorious as His death and resurrection solidify to the former that Jesus really is their king, indeed, the eschatological King of Israel.