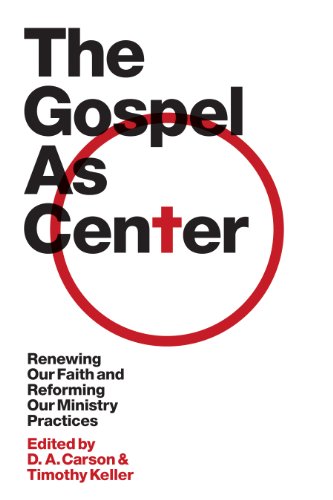 The Gospel As Center: Renewing Our Faith and Reforming Our Ministry Practices

Written by D. A. Carson and Timothy Keller, eds Reviewed By Gavin Ortlund
Ethics and Pastoralia

This book can be well-understood as a kind of book-length elaboration of the Foundation Documents of The Gospel Coalition (TGC). Nearly all of its contributors are TGC Council members, and the chapters each have their origin as individual booklets, written to comment upon TGC's Confessional Statement and Vision for Ministry (p. 9). Moreover, from the book's subtitle, back cover, and front flap, it is already apparent that the purpose of the book is one with the purpose of TGC: re-centering evangelical theology and ministry practices on the gospel. Thus, in addition to serving as a valuable resource for gospel-centered ministry, The Gospel as Center also provides a sort of “insider's perspective” on TGC-a sneak peek into the inner thinking of this increasingly influential Scripture-based reform movement.

The book's 14 chapters vary significantly in length, quality, assumed audience, and relation to the Foundation Documents. Some, such as Sandy Willson's “Christ's Redemption,” simply exegete a portion of TGC statement of faith; others, such as Mike Bullmore's “The Gospel and Scripture: How to Read the Bible” cover a topic in the statement of faith but make no explicit mention of the statement itself; still others, such as Richard D. Phillips's “Can We Know the Truth?”, have no clear relation to the statement of faith, but seem to comment more upon TGC's theological vision for ministry. Among the most helpful essays is Sam Storms' “The Restoration of All Things,” which anchors future eschatology in the broader context of past redemptive history (drawing especially from N.T. Wright and George Eldon Ladd) and analyzes such topics as the intermediate state, the nature of the resurrection body, and recent trends in the doctrine of hell. Storms's treatment of Isa 65:17-25 (pp. 268-69) is especially illuminating. Readers will also benefit greatly from Philip Graham Ryken's defense of a classic Reformed view of justification, especially his treatment of imputation (pp. 161-63) and his analysis of Paul vs. James on the role of works in relation to faith (p. 167). Two other chapters that particularly stand out are D.A. Carson and Tim Keller's opening chapter for its cultural sensitivity and missional insight and Bryan Chapell's exposition of the gospel (ch. 7) for its devotional richness.

In general, the book follows TGC's posture of seeking a wise balance between primary, secondary, and tertiary issues. Discerning readers will note that the authors affirm with the Foundation Documents issues such as complementarianism (Davis, pp. 66, 72), divine election (Smith, p. 93), divine sovereignty over evil (Andrews, p. 80), a propitiating model of atonement (Smith, p. 109), imputation (Ryken, p. 143), and exclusivism over inclusivism (DeYoung, p. 182). The authors leave open, as the Foundation Documents do, issues such as millennial views (Storms, pp. 268ff.), cessationism (DeYoung, pp. 185-86), and the paedobaptism/credobaptism debate (Anyabwile and Duncan, pp. 237-41). Issues of ecclesiology are also left relatively open; in fact, one wishes for more discussion of such matters as church membership and church discipline in Tim Savage's otherwise helpful chapter on the church.

A possible breach in the book's openness on tertiary issues, however, arises in Andrew Davis's chapter on creation: he prefers to interpret the days of Gen1 as 24-hour periods (p. 63), and he reads the entire week chronologically (pp. 62-66). Evangelical readers who hold to a framework interpretation will likely wonder why their view is precluded from his summary of viable options; perhaps he intended to refer to this view as the “literary week view,” but erroneously suggested that the days in this view are 24-hour periods of time (cf. pp. 59ff.)? More scientifically inclined readers may also wonder how his apparent view that scientific advance should not alter our interpretation of Scripture relates to the rise of helio-centrism (p. 60).

But the book's generally impressive balance of structure amid openness in non-essentials brings up a larger point concerning TGC identity within evangelicalism. Even as TGC's openness on tertiary issues opens doors for cooperation across denominational lines, its closedness on many secondary issues increasingly distinguishes it from the doctrinal indifferentism and minimalism of much of broader evangelicalism. TGC's ability to effectively influence broader evangelicalism may depend on its ability to demonstrate how secondary issues often relate to the gospel, sometimes as an expression of it (as with, e.g., a complementarian view of gender), sometimes as a protection around it (as with, e.g., a high view of biblical authority), sometimes as one building block within it (as with, e.g., the doctrine of imputation or divine election), and still other times in perhaps less discernible ways. (It is significant, for example, that Scot McKnight's criticism of Chapell's chapter as too narrowly “soterian” touches on the nature of the gospel itself-not on secondary issues.) As TGC continues to seek to refocus evangelicalism on “the gospel as center,” it may paradoxically find an increasing need to defend its stance on issues around the periphery and their relation to the center.

The same issue arises with TGC's relationship with other segments of the gospel-centered movement. For example, most younger, Reformed evangelicals would agree in principle with Carson and Keller's cultural posture of seeking the middle ground between accommodation and disengagement (pp. 13-17), but in practice significantly divergent leanings exist within this camp. One wonders, to give one specific example, if Together for the Gospel would list “doing justice and mercy” as one of five characteristics of gospel-centered ministry, as stated in TGC's theological vision for ministry (p. 285). Once again, issues in outer parts of the circle (so to speak) bring about different understandings of what it means to “hold the center.” The Gospel as Center thus exhibits the extent to which TGC, as it continues to wrestle with the healthy tension of finding the right balance of closedness and openness, may find an increasing need to define itself more clearly not only in relation to broader evangelicalism, but also to other wings of the Reformed resurgence.