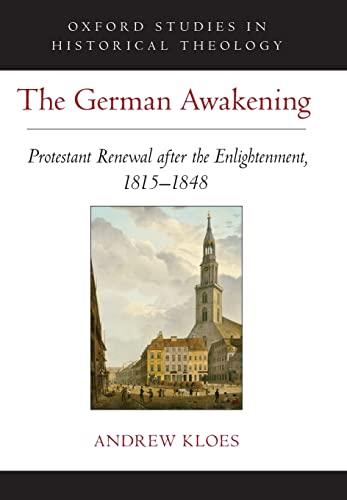 The German Awakening: Protestant Renewal after the Enlightenment, 1815–1848

The German Awakening Movement in the early nineteenth century had a profound impact in Germany, not only on religious life but also on politics and social reform. It resulted in a newfound religious zeal and the formation of organizations devoted to missions and charitable activities. Many prominent Germans participated in these revivals, including Prussian King Frederick William IV, Otto von Bismarck, aristocrats, generals, theologians, and pastors. Some of those influenced by the Awakening Movement might be familiar to an Anglo-American audience, such as Bristol preacher and orphanage director George Müller, Princeton theologian Charles Hodge, the nurse Florence Nightingale, Swiss Reformation historian Jean Henri Merle d’Aubigné, and church historian Philip Schaff.

Kloes’s The German Awakening is the first English-language work that tries to provide comprehensive coverage of the German Awakening Movement. This is a daunting task, for the movement included myriads of influential people and organizations. Kloes tries to manage the task by proceeding thematically. After his introduction, he opens with a chapter analyzing the use of the term “awaken” in German religious discourse over the centuries prior to the nineteenth century. This is followed by a chapter on the rise of Enlightenment rationalism in German Protestantism in the eighteenth century. After that, Kloes analyzes four main arenas of the Awakening Movement in separate chapters: preaching, theology, evangelism, and social reform.

There is much to learn about the Awakening Movement in Kloes’s book. He characterizes it as an orthodox, pietistic, ecumenical, international, and modern phenomenon. By orthodox he means that it rejected Enlightenment rationalism and embraced a more traditional understanding of Christianity, including belief in original sin, salvation through Jesus’s death, the reliability of scripture, and the reality of miracles. It was pietistic because it stressed the necessity of personal conversion and promoted religious activism.

The term “ecumenical” is more problematic. Kloes correctly shows that the Awakening Movement bridged different strands of Protestantism and had important connections with a Catholic Awakening. However, the Awakening Movement’s ecumenism only reached so far. While the Protestant Awakening was sympathetic with the Catholic Awakening, it was not keen on seeking unity with Catholicism. Also, within the Protestant churches, the awakened churchmen engaged in polemics against rationalist theologians and pastors. Their ecumenism only embraced those who shared their opposition to rationalism and espoused their pietistic form of Christianity.

Kloes ably demonstrates the international dimension to the Awakening Movement, largely by discussing the British influences on the German movement, which were substantial. However, it would have been interesting if he had also discussed the influence of the Awakening Movement on Anglo-American theologians and pastors who studied in Germany under awakened theologians.

Kloes argues that the Awakening Movement was modern, primarily because it made liberal use of the newly emerging voluntary associations to promote missions and charitable institutions. The term “modern,” however, is notoriously slippery. Since the Awakening Movement vehemently rejected Enlightenment rationalism in favor of more traditional forms of Christian belief, some would consider it inherently anti-modern. Nonetheless, Kloes correctly stresses that they used modern tactics, such as forming voluntary organizations.

Kloes’s study on the German Awakening Movement is a sober, scholarly analysis providing us a wealth of information, not only about the movement but also about the relevant historiography. Kloes’s research is impressive, as he uses a broad array of primary sources (though no archival sources). The extensive discussions of historiography and the frequent lists betray its origin as a doctoral dissertation. While its scholarly approach is a strength, it will not likely appeal to a general readership.

Despite its scholarly contributions, only rarely do Kloes’s descriptions of people and events capture the excitement of the revivals. One telling example comes in his treatment of Ludwig Hofacker, whom he rightly claims was “arguably, the best known of all the Erweckungsprediger [Awakening preachers]” (p. 109). While acknowledging his prominence, Kloes only devotes to Hofacker one paragraph, which mostly details the number of editions and translations his famous book of sermons went through. Kloes says nothing about Hofacker’s spiritual life, his impact on his congregations, or the content of his sermons. Nothing in this paragraph helps the reader understand why Hofacker’s preaching was so exciting that his church was packed and people would walk for hours to attend. He mentions a biography about Hofacker by Albert Knapp, but it is not clear if he read it. Further, there are at least four more recent secondary works on Hofacker, but none were consulted.

Nonetheless, this is quite a scholarly achievement, filling a lacuna in the English-language scholarship. A general audience will not find much of the excitement of the revivals here, but it does provide academic historians and church historians with a helpful overview and analysis of a remarkable time of religious revival.