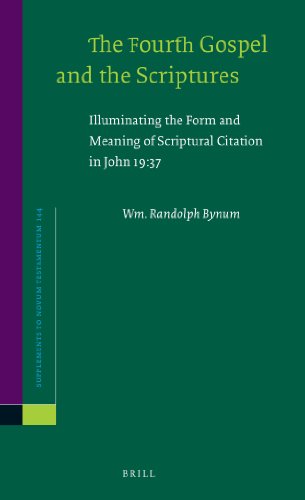 The Fourth Gospel and the Scriptures: Illuminating the Form and Meaning of Scriptural Citation in John 19:37 (Supplements to Novum Testamentum)

In this monograph (a revised PhD thesis from the University of Manchester; supervised by Dwight D. Swanson and George J. Brooke), Bynum analyses the use of Scripture in the Fourth Gospel (FG). Specifically, his study “seeks an adequate explanation for the unusual form of Zechariah 12:10 as cited in John 19:37, and the role it plays in the Johannine narrative” (p. 1). Bynum undertakes this technical task by reevaluating the textual evidence from the Judean Desert with an emphasis on “R”—a revision of the Old Greek (OG) text toward the Massoretic Text (MT) found at Nahal Hever (8HevXIIgr)—and other textual traditions.

Bynum’s opening chapter introduces the problem in need of investigation: the citation in John 19:37 does not cohere with any known manuscript or textual tradition of Zech 12:10. He introduces the other prevalent theories and suggests that R is the best option for the source text of this citation. In chapter two, Bynum briefly describes the “life setting” of the FG.

Chapter three “provides an overview of the use of the Jewish Scriptures by John within the Sitz im Leben outlined in chapter 2” (p. 17). In this section Bynum discusses the function of citations in the FG generally and notes that the textual situation of the Hebrew Bible in the first century was complex. He states that “the biblical text of the era was not to be found in a single, monolithic text, either in Hebrew or Greek, but in pluriform textual traditions existing side-by-side” (p. 20).

In chapter four, Bynum provides a detailed sketch of the textual history of the book of Zechariah. He contends that, based on the existing textual evidence from Qumran and elsewhere in antiquity, the Hebrew text of the Twelve does not offer overwhelming evidence of “significantly diverse textual traditions” in the first century, while it does “indeed present evidence of variant textual traditions” (p. 44). Bynum also makes this same case for the OG and early Greek revisions, arguing for textual pluriformity in the Greek textual tradition. According to Bynum, the MT was likely not the Vorlage of the OG translation, and early revisions—including R—illustrate an impulse to revise the OG toward the MT, perhaps even as early as the second century BCE (p. 55). For Bynum, this is important because the textual milieu in which the FG was composed was one in which textual pluriformity was an accepted reality.

Bynum continues the discussion, in chapter five, by delving into a detailed analysis of Zech 12:10 (pp. 59–109). He attempts to reconstruct the original reading of Zech 12:10 “with the greatest overall amount of textual certainty” (p. 65). He accomplishes this task by discussing textual criticism generally, translation technique in the OG, and other textual issues in Zech 12:10. He posits two emendations to the text of the MT: the removal of the accusative marker and the alteration of the vocalization and/or consonants of the preposition אלי. He states that “the traditional Massoretic vocalisation of אלי complicates both syntax and theology” (p. 107).

In chapter six, Bynum analyses the source text of Johannine citations generally. He demonstrates that the identification of the textual sources of John’s citations is complex. The FG sometimes cites the Septuagint verbatim, quotes a Greek text with variations (demonstrating a possible awareness of early OG revisions), and possibly cites Hebrew traditions. Bynum notes that this use of Scripture fits well within the framework of “accepted Jewish editorial and exegetical practices in the first century C.E.” (p. 137).

In chapter seven, Bynum attempts to identify the particular textual tradition that underlies the citation in John 19:37. He compares the retroverted citation to all known Hebrew textual traditions and the citation itself to all known Greek versions. None match exactly. Next, Bynum presents twelve characteristics of R and notes that almost every characteristic matches John’s quotation (p. 156). He finishes the chapter by, again, reviewing the other perspectives on the source text of John 19:37 and notes that “the concept of John quoting R vindicates the rightly perceived elements of truth in the many disparate scholarly opinions regarding this quotation” (p. 169).

Bynum concludes the study by exploring the implications of his findings on the broader field of Johannine studies. He briefly discusses critical and theological issues, and he offers further avenues of research.

Bynum’s monograph presents an innovative critical approach to the use and interpretation of Scripture in nascent Christianity. His emphasis on textual pluriformity places the composition of the FG squarely in its textual milieu, and he builds a good foundation from which to ask serious theological and thematic questions of the FG. Bynum also interacts with all the relevant textual evidence including Judean Desert scriptural manuscripts, Hexaplaric evidence, and other versions along with the MT and OG/LXX. In doing so, he exhibits significant linguistic skill. His writing is clear, and he guides the reader successfully through a vast array of technical data.

Despite its strengths, Bynum’s approach does evidence some minor weaknesses. First, it is unclear why it is necessary to reconstruct the “best” Hebrew text of Zech 12:10 (ch. 5). The preceding chapter demonstrates that textual pluriformity in John’s milieu was a reality and that, most likely, the evangelist did not have access to the “original Hebrew.” This reconstruction of a hypothetical textual form adds little to his primary argument. However, his reconstructed “best” text does match his reconstructed Hebrew Vorlage of R. Also, some of Bynum’s terminology is anachronistic. He correctly avoids the term “biblical” throughout the discussion. However, on multiple occasions, he refers to the textual culture of the first century as John’s “biblical textual milieu.” This phrase would be better expressed by omitting “biblical.”

Overall, Bynum’s approach is original, erudite, and important for the study of allusions and citations in the NT. His emphasis on textual form and first-century textual culture is a helpful corrective to “OT in the NT” approaches that do not thoughtfully interact with these important dynamics. This volume is aimed primarily at specialists. For those with knowledge of (at least) Hebrew and Greek, I strongly recommend this volume.