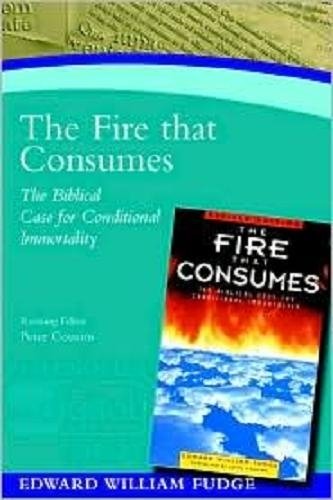 The Fire That Consumes: The Biblical Case For Conditional Immortality

In 1974 John Wenham expressed the need for fresh study and ‘serious consideration of the case’ for the doctrine of conditional immortality (The Goodness of God, Leicester: IVP). In the light of the recent debate which comments by John Stott sparked off (Essentials, with David Edwards, London: Hodder & Stoughton, 1988), and some of the uncharitable remarks and actions that have occurred as a result of this, Fudge’s work is to be thoroughly welcomed. A revised version of his 1982 American book, The Fire That Consumes,it clearly sets out what it claims to achieve—that is, to provide the case for conditional immortality. Thus Fudge systematically presents the biblical and extra-biblical evidence for the belief that after the last judgment, rather than suffering eternal conscious torment, the wicked will be destroyed. Such a view is also known as annihilationism, although Fudge wishes to distance himself from this title due to its historical associations. In actual fact, Fudge is influenced little by his anthropology. Whether immortality is inherent to human nature or not (a topic which he briefly covers), his final authority rests with an exegesis of Scripture.

In the OT literature, Fudge believes that most references to the end of the wicked are dominated by the theme of destruction. Hence, although Sheol is the destiny for all humanity, the stories of the flood and the destruction of Sodom provide Fudge’s governing paradigms. Material from the Apocrypha and pseudepigrapha is more explicit, yet also considerably varied, presenting either destruction or eternal torment, or both, as the fate of the wicked. Thus Fudge concludes that at the time of Jesus no one view dominated.

It is in his examination of the NT evidence that Fudge’s most detailed analysis comes into play. Exclusion, the destructive fires of hell, images of loss and destruction all go together to build the cumulative case. Fudge anticipates the arguments from his opponents, and in many cases deals competently with them. Less convincing are his defence of the lack of parallelism in Matthew 25:41–46, and the rising smoke in Revelation 14:11. In fact, one of the main criticisms of Fudge’s work would be his hermeneutical approach, at times appearing to be an instance of special pleading. It may be the case that the biblical witness is more complex and multi-faceted than Fudge will allow. Having said this, one of the advantages of this work may well play a part in demonstrating this very fact. Traditionalists have influenced the doctrine and interpretation of the church on this matter for so long, that many of the different aspects of the biblical witness to the doctrine of hell have either been missed or embellished.

The final part of Fudge’s work examines some of the more theological, philosophical and pastoral arguments used in the debate, such as the morality of conditionalism and the impact it may have on faith. It is a pity that such discussion could not have been extended, for the comments are more generalizations than arguments.

Having said all this, The Fire That Consumes is a vital and important book. Tackling a contentious issue, it intelligently and forcibly presents conditionalism as a Christian option for the church today. Even if the arguments are not conclusive, Fudge presents a work that will not let conditionalism disappear, and which calls for traditionalists to seriously re-examine their presuppositions and their exegesis.