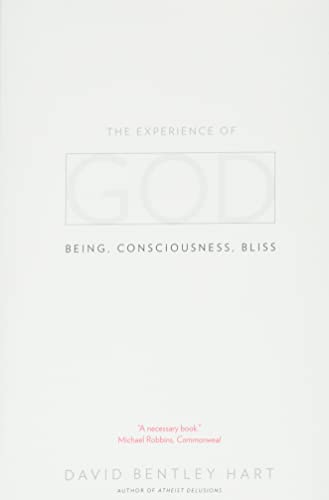 The Experience of God: Being, Consciousness, Bliss

David Bentley Hart’s somewhat misleadingly titled The Experience of God is a brilliant and necessary contribution to contemporary discussions about the existence of God and the relationship between faith and science, against the backdrop of a rhetorically virulent, intellectually thin, but culturally influential “New Atheism.” The book can be described as a three-pronged refutation of naturalism, the underlying metaphysics of atheism. Hart’s stated objective is to distill the classical definition and descriptions of God shared by all major religious and metaphysical traditions—orthodox Judaism, Christianity, Islam, Sikhism, Hinduism, Bahá’í—in order to show how misguided and confused are atheist attacks on God. The underlying objective of the book is to show that naturalism, the metaphysical conception that the universe is a closed system, reducible to physical entities and interactions, is self-refuting, incoherent, and ultimately “indistinguishable from pure, magical thinking” (p. 17) and superstition (p. 16).

With characteristic flair, Hart argues that the case for believing in God is, inductively, much more forceful than the case for naturalism, if one is to do justice to the “thereness” of being, the reality of conscience and intentionality, the operations of reason, and of the human desire for truth, goodness and beauty. In fact, these are, as he belabors to show in Chapters 3 to 5, the most basic evidences for the reality of God.

In chapter 1 (“‘God’ Is Not a Proper Name”), Hart rehearses the classical theistic conception of God. We are reminded that God is not some discrete super-being sitting on the same ontological level with contingent reality, but “the infinite fullness of being, omnipotent, omnipresent, and omniscient, from whom all things come and upon whom all things depend for every moment of their existence, without whom nothing at all could exist” (p. 7; Acts 17:28), but also “infinite consciousness, infinite bliss . . . in whom we find our only true consummation” (p. 41). In sharp contrast with this conception, atheism and naturalism—atheism’s metaphysical grounding—are irredeemably incoherent, constituting a “fundamentally irrational view of reality” (p. 16). Hart pulls no rhetorical punches in calling naturalism “the quintessential expression of heroic irrationalism: a purely and ecstatically absurd venture of faith” undertaken in an ultimately meaningless life. (p. 19).

In “Pictures of the World” (ch. 2), Hart briefly describes and comments on the architecture of the antique, medieval and early modern universe. We are reminded of the birth of the scientific method, its scope and limits, and of how it came to be conflated with “mechanical philosophy” and a materialist metaphysics. This has meant the bracketing out of formal and final causes as irrelevant and ultimately illusory. While the point is not original, Hart laudably reiterates that the much-discussed conflict is not between faith and reason or religion and science, as atheists would have us believe, but between two irreconcilable ‘pictures of the world’: theism and naturalism.

Chapter 3 (“Being”) is an excellent introduction to and synthesis of traditional metaphysics. We are reminded that God is the necessary being who donates existence to every finite being, and who therefore illumines the very possibility of existence, which naturalism absurdly takes for granted. Hart defends the notion that God, as perfect actuality and fullness of being, is simple, teasing out the implications concerning divine eternity, impassibility and immutability. The picture that emerges is that of God as a perfect being. On this point, we can anticipate that the book will attract readers who will question whether this perfect being is indeed identical to the “God of Abraham, Isaac, and Jacob” and of Jesus Christ, particularly when the issues of freedom and prayer are under discussion.

In chapter 4 (“Conscience”), the reader is offered a dizzying ride through extended arguments against physicalist accounts of the human mind and consciousness. Familiarity with the philosophy of mind and cognitive science is casually assumed. Hart perspicuously analyses and ultimately refutes reductionist conceptions of the mind and consciousness underpinned by a materialist ontology and conception of nature. Among some of the insoluble difficulties that consciousness poses for a materialist model of the mind are: the qualitative dimension of experience (a sophisticated elaboration on the notion of qualia), the operations of reason and its dependence on semantic content, and intentionality or the mind’s directedness. Hart’s focus is on the significance of the argument from (the mystery of) consciousness for a proper understanding of God. Constructively stated, consciousness is a powerful pointer to God as the ultimate coincidence and fullness of being and consciousness.

Chapter 5 (“Bliss”) contains a series of observations on epistemology, ethics and aesthetics offered as part of the book’s overall aim to demonstrate theism’s rational and explanatory superiority over naturalism. Reason, argues Hart, operates on the basis of a “rational appetite” or longing for the “comprehensibility of things” in the hope of attaining understanding and discerning meaning. We desire to know because reality is, on a theistic framework, knowable, “transparent to thought.”

Particularly devastating are Hart’s remarks about the illusory nature and impossibility of naturalist morality. Again, Hart unravels the logic of evolutionary, “adaptationist” ethics, and shows the groundlessness of all ethical imperatives in a materialist paradigm. In contrast, on a theistic understanding, the desire to do good, which Hart clarifies is present in all people, religious or unbelievers alike, is “a confession of a natural longing for God” (pp. 254, 274), the essence and source of moral good.

Another line of attack on naturalism is the existence and nature of beauty. Hart poignantly speaks of the glorious uselessness and prodigality of beauty. Naturalism is again shown to be incapable of judiciously accounting both for beauty itself and human experience of it. The desire for and movement towards beauty is nothing less than a desire for and a movement towards perfect beauty and the experience of disinterested bliss, which are to be found only in God.

In the distinctly quotable last chapter (“Illusion and Reality”), Hart rehearses the main arguments against materialism and popular atheism, and offers more penetrating comments on the limits of science and scientific knowledge. Atheism is described as little more than a therapy, an “emotional sedative” (p. 305) to ease the sense of despair one is bound to experience in what is ultimately an utterly meaningless world. In this last chapter Hart also issues timely warnings concerning potential social, cultural, and political outworkings of materialism, pointing to the most telling examples modern history can offer. The book ends with an apology for contemplative prayer. If “knowledge of any reality is to be sought out in terms appropriate to the kind of reality it is” (p. 318), and since God is the ultimate personal reality, Hart argues that prayer is the true ‘empirical’ means of knowing and experiencing God.

Some critical comments may be in order. In terms of style, Hart’s prose is, on the whole, delightful, and enlivening, even if there is a good measure of repetition that might have been eliminated by a stronger editorial hand. At times, the rhetoric is, as we’ve come to expect by now, overindulgent and excessive. While much of modern atheism fully deserves Hart’s jabs, we may doubt whether some of the comments on analytic philosophy, intelligent design and inerrancy are indeed warranted. These may be particularly questionable in light of Hart’s advice for critics of any idea to “try to understand the strongest possible formulations of that idea, as well as the most persuasive arguments in its favor” (p. 8).

As for its substance, the abundance of cogent arguments against materialism and atheism, and the many piercing observations on science and the limits of scientific inquiry will surely prove immensely useful in apologetic endeavors. Equally instructive and stimulating is his erudite exposition of classical theism. The lack of Trinitarian and Christological references in the book should therefore come as no surprise to those who appreciate the author’s declared aims and methods. Still, some readers will wonder whether Christianity is indeed faithfully represented here, when there is no mention of the Trinity and of Jesus Christ. Moreover, one may point out that some of the descriptions of God as Perfect Being, Consciousness, and Bliss are, demonstrably, in tension with biblical depictions of the “God of Abraham, Isaac, Jacob” and of Jesus Christ. To be fair, however, these will not be misgivings about Hart’s project specifically, but about classical theism more generally.

Therefore, even if some of the arguments may require a Trinitarian reworking and a better attunement to the biblical material, David Bentley Hart’s book will have taken us far in the right direction, as far as the apologetic task is concerned. For that we can be most grateful.