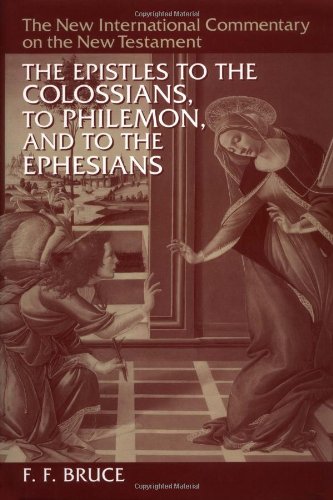 The Epistles to the Colossians, to Philemon and to the Ephesians

Professor Bruce wrote on Colossians in this same series in 1957: it was then his first attempt at a Pauline commentary, and he returns to the epistle more than twenty-five years later as one who has not only taught and written widely on Christian origins in general, and on Paul in particular, but also as one who has produced commentaries (some major) on most of the Pauline epistles. With this experience he modestly says ‘I hope I [now] understand better what is involved in the interpretation of Colossians’ (p. xi).

The new Colossians commentary may fairly be described as a revision of the older one (similarities being obvious in many sections), but the revised version is appreciably longer and crisper, and so incorporates much more detail. The Introduction affords a considerably more nuanced discussion of the Colossian heresy, which Bruce elucidates in terms of analogies drawn primarily from Jewish Merkāḇāh speculation concerning heavenly ascents, thus abandoning as unnecessary hypotheses both the neo-Pythagorean background suggested by Schweizer and the pagan Gnostic background proposed by Käsemann and Schlier for something like the type of Jewish incipient gnosticism described by Scholem. The errorists were advocating an ascetic spiritual regimen in order that they might experience visionary ascent into the heavens—and the danger was that their exalted experiences of angelic worship of God might not only puff them up, but also lead to undue veneration of the powers themselves and eclipse the soteriological uniqueness of Christ. On the question of authorship Bruce still regards Colossians (and Ephesians) as Pauline (an easier option in his view than Ephesian dependence on Colossians or vice versa).

In the commentary proper the hymnic structure of Colossians 1:15–20 is now fully recognized (Bruce essentially follows the strophic arrangement of P. Benoit), and modern writers on this central passage are certainly engaged, even if their views and arguments are not fully reviewed (e.g. as when Bruce insists that 1:15–17 do not merely affirm that the personified wisdom of the Old Testament books is really Christ, but that the Christ who lived on earth, ‘whom God made our wisdom’, is the one who was before all creation, ‘the cosmic Christ’. Here he is taking Dunn’s thesis to task, but the fact only emerges in the second part of a footnote.) Bruce is fairly dismissive (probably rightly) of the worth of attempts to detail the tradition history of the passage (thus, e.g., rejecting that in a pre-Pauline stage the word ‘body’ in v. 18 denoted the kosmos, not the church), and (again rightly), has a keen eye (in this passage and throughout) for what the proposed ‘parallels’ do not say (e.g. in Judaism, where the Messiah is a pre-existent being he is this ideally (not really) and has no cosmic role as such; similarly Wisdom may be said to be intimately involved in creation, but creation is never for Wisdom as for Christ (v. 16), etc.); so the distinctiveness of Paul’s assertions is seen in relatively clear relief. Similar strengths are shown throughout the commentary—though the reviewer felt that 2:13–19 deserved even fuller treatment.

The commentary on Philemon occupies a mere thirty-four pages, of which fourteen deal with introductory matters (Authorship; Date and Provenance (Rome in the ’sixties); Paul and Onesimus; and The Significance of the Letter (including a critical review of Knox’s suggestion that Philemon reached the canon because the Onesimus of the letter is the same Onesimus who later became bishop of Ephesus)). On Bruce’s view Colossians, Ephesians and Philemon were all sent on the same occasion with Tychicus and Onesimus, and so it is particularly appropriate that the commentary on this short but undeservedly ignored letter should accompany Colossians and Ephesians rather than being attached to Philippians (as earlier in the series).

The last 188 pages are devoted to Ephesians, which Bruce has elsewhere labelled ‘the Quintessence of Paulinism’. A brief introduction sets Ephesians in relation to other Pauline epistles and their teaching, and questions the contention of Käsemann et al that we have here a post-Pauline development of early Catholic character. Instead Bruce suggests that the relationships with Colossians, and shifts of emphasis from that letter, are best explained if Paul was exploring the role of Christ as Lord of the cosmos (Colossians) now from the perspective of the church. He thinks that Paul sent this ‘encyclical’ with Tychicus to the churches of the Lycus valley (and possibly other Asian churches), and that the letter may have received its textually dubious name as a result of the church at Ephesus retaining a copy.

The commentary itself may not be marked by extreme novelty—and there are plenty of details one might wish to question (e.g. the treatment of ‘head’ as ‘origin’ (following Bedale) at pp. 274, 389, etc.; patria as ‘fatherhood’ at p. 323, and so on)—but once again a comprehensive awareness of modern scholarship is evinced (less detailed than in Colossians) and shrewdly summarized.

An evangelical student or pastor deciding on a commentary on Colossians would find Bruce a worthy candidate for his choice; on Ephesians there is simply no competitor, at this level, worth mentioning. As a single volume on the three epistles together it is of outstanding value.